As you should know by now we are about to embark on a charity cycle ride from John O’Groats to Lands End in aid of JDRF (Click here to support the charity and sponsor our ride).

We are just about ready to start heading up to John O’Groats in order to start the ride on July 26th. I don’t know if I’m ready for the ride itself though as I’m feeling quite fat and unfit at the moment. That’s all thanks to not enough time to train, lack of sleep and far too much cake.

We are hoping that you’ll be able to follow our progress online though. Hopefully I’ll have time to post up daily updates to this weblog each evening and we do have a system that should allow you to track our progress on the road. We aren’t sure how well it will work yet as it obviously requires us to have Internet access whilst on the road. Internet access may be patchy in places. It also seems to be quite a drain on the phone battery and doesn’t look as though it will last long enough for a whole days ride. We’ll see though and it may at least give you something of an idea of where we are.

We are using Endomondo for the live updates after testing a few other options. Endomondo seemed to be the best in as much as the tracking worked well, the updates were good and it looked nice as well. We did try a few others, the next best seemed to be Followme.com, although it simply didn’t look as nice as Endomondo and seemed a little basic as far as stats and such like go. It was just a simple tracker and nothing else. We may have to revert to it however as it isn’t a drain on battery life. Endomondo on the other hand looks nice and shows a nice set of stats about the current ride too. It also records a history of your rides which isn’t necessary for this application but is more useful as a rounded fitness tracking software tool.

Some of the routes we are taking are a little tricky too as we won’t be following the main roads where possible but will be off on the smaller roads in order to avoid the worst of the traffic. It might be nice therefore to use our phone as navigation devices as well. I’ve been using Strava to create the routes that we’ll take, so it seems sensible to use Strava as our navigation aid as well. The Strava iPhone app does indeed have a routes feature that allows you to follow your routes on a map with your current location also plotted.

I haven’t tried it out in the real world yet and will need an iPhone Bike Mount in order to do so, but it may well prove indispensable once we are on the ride. It’ll probably be useful for the support crews in their cars as well. Yet again though it will no doubt be quite a battery drain so I don’t think I’m going to be able to run Endomondo for live tracking and Strava for navigation at the same time and get anywhere near a full days battery from my phone. The tech seems good and the ability to do such things with your phone is certainly there, but it’s just not quite practical for all day rides with the current battery technology.

Mind you, if it all fails then I do have a back up plan with some old school laminated route cue sheets. 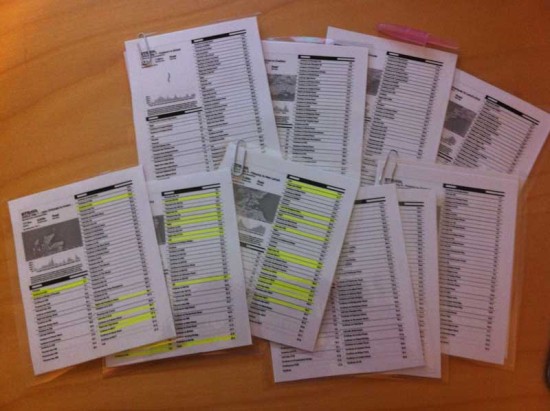