Holiday time!!! if you can call cycling the length of Britain from John O’Groats to Lands End a ‘holiday’.. Or driving it for that matter as that’s what Anna will be doing acting as support crew along with Morgan.

Before we could do that though we had the small matter of driving North to John O’Groats so we made a nice early start leaving Wales at around 5am. This was actually perfect as the drive through Wales and up to Liverpool was over before we knew it. Morgan slept until we got here anyway and thought he had been teleported here. I had a nice drive on quiet roads despite being dazzled by the low morning sun. Once on the motorway we stopped for breakfast and continued on our way. The M6 was quiet and fairly scenic as motorways go and even the trip through Glasgow was fine with a nice new motorway and no traffic despite lots of signs warning of congestion due to the commonwealth games.

Our first proper stop of the day was Loch Lomond so we pulled in at Luss and found a busy but lovely little beach with glorious sunshine and temperatures at around 28°C. We had a picnic on the beach and then Morgan and I went for a swim in the waters. I then headed off for a proper swim out around an island and back, seeing lots of fish on my way, a few large eels and getting dive-bombed by gulls on the far side of the island. The rocky bottom of the loch gives a nice sense of speed as I glided across the water. It was only half an hour of swimming, but that was just what I needed after 7 hours of driving. My sciatica had started playing up a little towards the end of the drive but the swim sorted it out.

The swim was followed by an ice cream and then we headed off towards Crianlarich. We soon found the hostel but it didn’t open until 5pm so we chilled in the shade and then Morgan and I did a geocache. we then got some supplies and checked into the hostel. The hostel was nice with a clean room, en suite shower room and toilet. There was a huge well stocked kitchen, a really comfortable lounge and a lovely little stream trickling by outside full of little trout.

We went to the Rod and Reel pub for dinner where I had Haggis, Neeps and Tatties. We then watched the Tour de France in the hostel before heading to bed after a long day and ready for another one tomorrow. 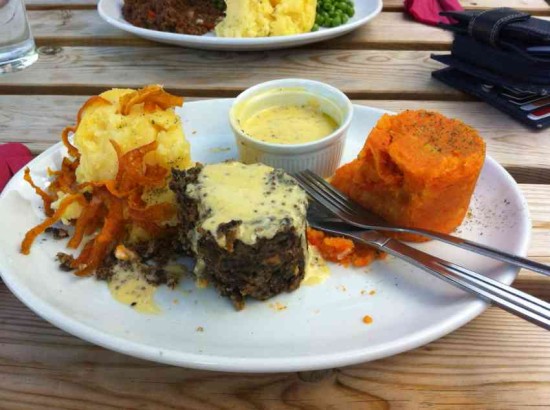