My trip to Kitzbühel in Austria for the 2014 European Triathlon Championships had begun. It started with an uneventful train journey to Manchester. I actually got off a stop early at Wilmslow where a client of mine was meeting me. Keith from Mannerborne who provides chauffeur services to the rich and famous had offered to collect me from the train station, chauffeur drive me to his house and provide me with dinner for the evening. I was therefore soon travelling in style through the outskirts of Manchester to his house. I had only ever corresponded with him via email and on the phone before so after more than 10 years working on his website it was nice to finally meet in person.

After dinner he drove me to my hotel where I booked in and arranged for a shuttle bus to the airport at 3:55am. The hotel room was OK but only just. It was only for a night though and with a 3am start I wasn’t going to be there for very long at all.

The shuttle bus to the airport was quicker than advertised, mainly because it was only calling at Terminal 2. In fact, the whole airport procedure was quicker than it shold have been and I was checked in, my bags were checked and I was through security and into the departure lounge less than 10 minutes after arriving at the airport. I probably could have got the next shuttle bus from the hotel and got up an hour later, but I’d rather be early than having to rush. Things were a little easier than usual as I didn’t have my bike box with me this time. It was going overland in the back of Andrea and Franks car. They were driving to Kitzbühel and had offered to take it which saved a bit of hassle at the airport. Although I do quite like taking my bike box with me as it’s good fun dragging it through train stations and airports.

I met Helen in the departure lounge a little later. She was travelling out the Kitzbühel for the race as well. She said that getting checked in and through security had been a nightmare with endless queue after queue – I was therefore glad I’d got there early as I’d rather be relaxing in the departure lounge for a little longer than necessary than standing in queues.

The flight to Salzburg was uneventful, only about 2 hours long and then we were soon on a coach driving through the amazing scenery of the Austrian Alps. It took about 1.5 hours to get to Kitzbühel where we were dropped off at our respective hotels. I was staying at the hotel Jägerwirt, a family run hotel close to the centre of Kitzbühel. I checked in to my room which was quite small but had everything I needed. It was quite noisy outside the hotel from traffic on the road, but as soon as I closed the large door to the balcony it was silent. I had a bath and shower and of course a nice comfy bed. wi-fi was â‚¬10 for the week and the hotel had a pool, sauna and wellness centre as well as a nice little garden. The view from the window wasn’t too bad either.

After settling in and unpacking I met up with Helen and we wandered down to the Tennis Centre to register and then we walked into town where we met Frank and Andrea. There wasn’t much in the registration pack, just the all important timing chip, race number, numbered stickers for our bikes, helmet and bag, and a bobble hat. We then all headed off to Lake Schwarzsee which was the venue for the race and had a quick swim. The water temperature was hovering around 22ºC. If on the day of the race it was below 22ºC then wetsuits would be optional, above 22ºC and they weren’t allowed. We therefore tried the water without wetsuits and it felt fine.

After our swim I got my bike from Frank and Andrea and we headed off to our hotels for the evening. My new tyres had arrived just before leaving so before dinner I checked my bike over and put new tyres on the rims. They were quite tight to get on but I managed it in the end.

Dinner at the hotel was amazing. A full on 5 course waitress service meal with Red Snapper as the main. I’d never had red snapper before but it was the best fish I’ve ever had. 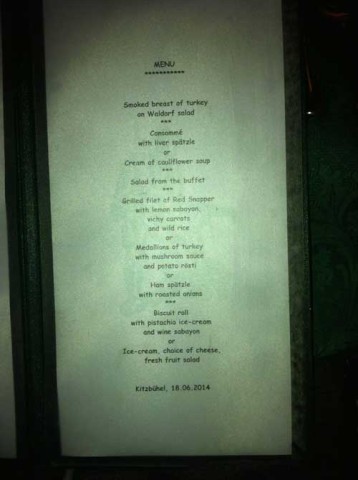 Day two was always going to be a busy one for me, I had a bike recce and run recce to do, I had to check my bike over, register, attend the race briefing and set up my transition area. We had however already registered so we were one step ahead. That was until I was checking my bike over  ready for the recce and managed to drop the valve extender inside the rim. It was well and truly stuck and I was in no frame of mind to get it out. People were saying that it took some zen-like patience and with everything I had to do I was unlikely to find any of that!

I therefore arranged to take it to the BTF bike mechanics.

Before I did so, Andrea, Helen and myself headed off for a glorious ride through the sun-drenched alpine countryside to recce the bike course. It was quite hilly and some of the descents were quite dangerous but it looked as though it would be fun. We had plenty of stops for photos. We also tried to find the run course but didn’t have much luck with this.

Back in Kitzbuhel and I took my bike to the mechanics and left it with them for an hour.  During which time they took the rim tape off for some reason, replaced my my inner tube and then failed to extract the extender. They charged me 12.50 for ‘not doing it’ though and left me in a worse state than before as they couldn’t even get the tyre back on so I had to do it myself yet again. I said they were tight, but they should be able to do it if I can. I later noticed that they had ‘half put it on’ backwards anyway. I never have much luck with mechanics and hate paying people to work on my bikes as they always seem to mess it up. Thankfully I noticed their errors and once again set to fixing them myself. By now I’d taken the tyres off and on about 8 times and my thumbs were getting pretty sore from doing so.

I got it all done just in time and was going to have to race with the valve extender stuck inside the rim. It rattled around in there but shouldn’t cause too much harm I hoped. There was little I could do now though as I had just enough time to rush up to the lake and rack my bike.

Whilst there I had a little chat to a few people I knew and met other ‘Facebook friends’ for the first time. The main talk of the day was the hilly and tricky bike course and whether or not to wear a wetsuit. I had decided not to wear one.

With my bike racked I strolled back into Kitzbühel for my 5 course dinner at the hotel and then tried to get an early night ready for the race in the morning. 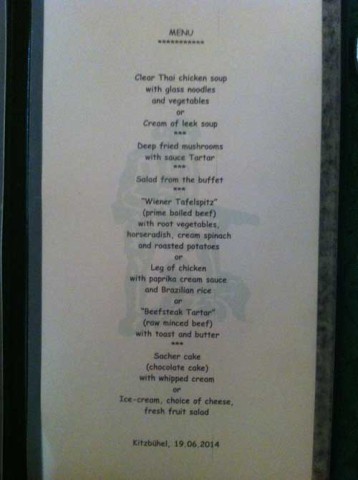