The Easter holidays continue and we’ve all been at home.

Morgan is off school, Anna has the whole week off work and I had yesterday off work too as the university was still closed. I’ve been doing the odd bit of work on the computer in the early mornings but other than that have pretty much taken the time off too.

A Lazy Day at Home

We haven’t been up to a huge amount, other than eating loads of Easter chocolates and therefore gaining lots of weight. I was almost down to race weight of 63kg last week, but I’m up to 69kg again now thanks to a weekend of wedding celebrations and far too many Easter goodies!

Monday was an OK day weather-wise – it was actually quite nice in the morning. After a little bit of work I headed out on my bike for a 2 hour cycle while Anna and Morgan popped into town to get some bits and pieces to repair the sheds. My bike ride consisted of some hill reps so made a pretty set of graphs, but I wasn’t really going for it quite as much as I should have. I had also changed the cassette and tyres on my bike before heading out so was back on my training set up, which is always a little slower.

Once back at home and showered it was time for lunch and then we all went out into the garden to re-felt the shed, re-attach the doors to the sheds and generally fix the damage that was done to them by the storms. We chilled in the garden for a bit and then went for a wander on the beach. We did have a quick attempt at fishing but the tides and winds weren’t quite right so we gave up on that idea. We did get our free ‘locals only’ season parking ticket for the estuary though. The weather was now a little overcast but there were still lots of people on the beach and lots of people on the boardwalk too as we walked across it to the seafront. We then strolled around the point, clomping through the soft sand. Morgan wanted to stop and build sand-castles all the time which was OK once or twice, but we wouldn’t have got anywhere if we stopped every 100m for him to build another! Thankfully they weren’t too big. 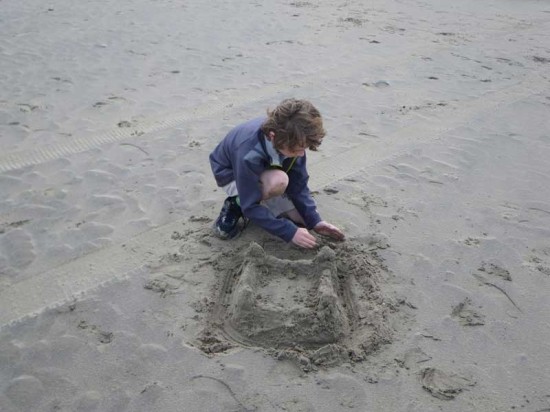 Once back at home we had a lazy evening eating yet more chocolate and continuing to work our way through the huge chocolate cheesecake I had made as a treat for Anna. Rather than follow the recipe I posted here before for a chocolate cheesecake I decided to make it with more topping this time so used similar quantities of cream (300ml of extra thick double cream), philadelphia (160g chocolate and 400g plain) and sugar (100g) in the topping as I did for the Blueberry Cheesecake, and made it in a smaller, deeper tin. I also used chocolate chip Hob Nobs for the base for an extra chocolate hit! The result was of course delicious.