I haven’t been out on my bike for ages. There are various reasons for this, my full-suspension bike has had various mechanical issues that I’m still solving, my car won’t start and I haven’t had the time. So, it was nice to finally get out for an off-road ride yesterday, and the snow-covered landscape made it even better. 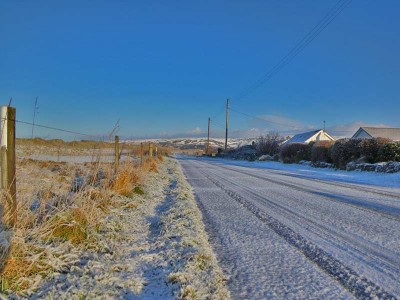 Steve got here from Birmingham at around 9am and then we met John and Mark at the end of the road. The roads themselves were pretty icey but with a fresh covering of snow there was pelnty of grip and it was nice to ride along them with the snow crunching under our tyres. We rode into Borth and then down towards the Animalarium and along thr banks of the River Leri besides the caravan park. We then crossed the footbridge and rode around the southern end of Borth Bog with amazong views across the Bog to Aberdyfi and the hills beyond.

We then went through a couple of farmyards and then back out onto the snowy roads, down the hill to the Dol-y-Bont toad and then back up the steep hill and into Tal-y-Bont woods. We played around in the woods for a bit and then John and Mark headed back to Tal-y-Bont and Steve and I rode across the fields and over the River Leri again into the Riverside Caravan park, up out onto Glandfred Lane and back along the road to Dol-y-Bont. Here we once again crossed the River Leri and then rode along its banks for a while. We crossed it once again and then rode along the embankment all the way to Ynyslas. The snow had now melted at the lower levels.

It was good to be out on the bike and the conditions couldn’t have been any better. Only 15 miles at a very relaxed pace as it took over 2 hours but what better way to spend a crisp sunny winters morning.