I started off the day with some work on the computer and then headed over to the beach for a quick 2km swim in the sea. The sea temperature has just about reached double figures for the first time this year and is currently hovering around the 10ºC mark. Not warm, but not too cold either and after my first open water swim of the year last week with Nia, it felt OK today. My hands, feet and chin were still quite cold by the end but it was perfectly bearable.

Next up was a ride to Aberdovey and back. Nothing too strenuous, just a steady, relatively flat 46 mile ride to spin my legs whilst Morgan went to a friends house and Anna had some time at home alone. There was a group of cyclists heading out along the same route from Aber, so I timed my ride to hopefully coincide with them. I expected to be a few minutes ahead of them on the road and that they would therefore catch me. However, looking at the strava segments afterwards, it looks as though I was a little further ahead of them than I thought and that I was pulling away from them over the ride too. Maybe I should have left later and caught them up instead, but then I would have ended up going hard in order to catch them.

I did see them whilst on my way back from Aberdovey and did contemplate turning around and joining them but by now I was on my way home so just kept going.

After lunch of homemade leek and potato soup and some more chocolate I decided to make a nice curry for dinner so we needed some supplies. We had also hoped to visit the Dyfi Osprey Project which had opened a new state of the art 360º observatory last Friday.

The Dyfi Osprey Project as everyone knows it is situated on the Cors Dyfi nature reserve. We used to visit this now and then before the Ospreys arrived. Back then it was a quiet little nature reserve with a boardwalk around the boggy, swampy reserve. The main attraction were the water buffalo that grazed here, and the fact that it was a quiet, little known reserve and therefore we were usually the only ones there.

Once estuary, reclaimed grazing, then conifer plantation and finally wildlife-rich wetland, the land at Cors Dyfi has seen many changes over the years. Today the reserve is a healthy mixture of bog, swamp, wet woodland and scrub supporting a wide range of animals and plants, including the magnificent Osprey, which bred on the reserve for the first time in 2011. If you’re lucky, you may also spot an otter or dormouse! Morgan was here a couple of weeks ago building dormouse boxes with the Cubs. The habitat is quite special and so boggy that boardwalks are needed to get around it.

The Ospreys are typically around from April to September which is also the best times to see many of Cors Dyfi’s other plants and animals, such as Common Lizard, Nightjar, Grasshopper, Reed & Sedge Warblers, Yellow Flag and Four-spotted Chaser.

Things have changed quite a bit here since the Osprey’s started breeding. First there was a raised hide built near to the car park, then a small visitor centre. Camera’s were set up on the nests with live feeds to the visitor centre. These are also streamed to the Dyfi Osprey Project website and their Facebook page is updated regularly with all of the latest news on the Ospreys. It is always a tense time in Autumn when the Osprey’s leave for Africa and we are able to follow their progress south thanks to GPS tracking devices. It is always exciting when they return in April too, although quite what they’ll do if they don’t return one year I’m not sure!

This year they have added a huge 360º viewing observatory and a brand new board walk that leads across the bog to it. 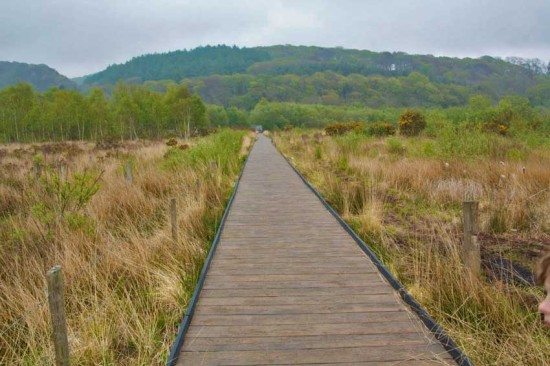 They have removed the old boardwalk though which is a shame as now there is just a single fairly straight boardwalk that only goes to the observatory. There are little seating areas along it but it was quite nice before when there was at least a circular walk to go on. The observatory itself is an impressive wooden structure that looms over the marshland. It’s certainly well constructed and is an impressive architectural feature. There are several levels for viewing which is nice as it towers over the scrubby, birch trees that were full of birdsong when we visited. 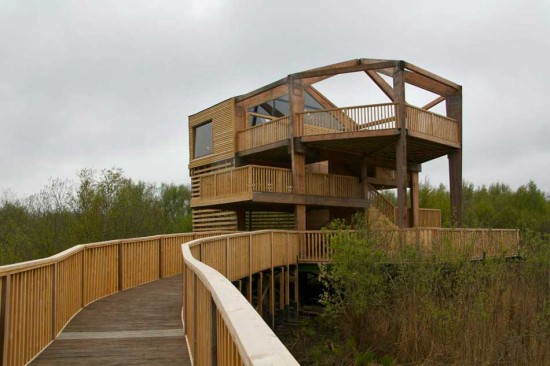 Once at the top there is a large indoor room with various charts on the walls showing when the Ospreys arrive, when they lay eggs, when the eggs hatch and when they leave again. There were binoculars for you to use and a telescope set up trained on the nest which you can see quite easily from the windows. There wasn’t much else there yet though and it all felt quite bare, but I guess that will change over time. If anything I think they would be better off having a small cafe here as I’m sure people would love to sit quietly in the observatory watching the world go by whilst eating a flapjack and sipping on a coffee. They do have a small cafe at the car park, but nothing here. It’s still early days I guess, seeing as the observatory itself was only opened on Friday.

We could see an osprey on the nest though and had quite a good view through the telescope.

Looking at the Nest

They have had lots of visitors since opening the observatory though and the whole reserve has changed considerably from when we first started visiting it. We saw a few friends whilst there but didn’t really do much other than walk to the observatory and back. The reserve had lost some of it’s charm in a way, but the Osprey’s have certainly helped put it on the map and it is now quite an attraction. We do feel as though they could do a little more with it though. It was lovely when no one knew about it and the habitat and wild-life is still the same, but now that it is well known and there are always lots of people there we think they should have a few more things to do for families. Maybe some activity sheets for kids in the observatory, pond dipping stations along the boardwalk and some more information boards about the plants and animals you can see. At the moment it all feels a little bare with just a single straight boardwalk to a brand new wooden observatory.

Admitedly there wasn’t much here before, but the circular walk was more interesting than the current boardwalk and with fewer people around it had a different feel that helped take you closer to the natrue around you. I’m sure it will improve in time though. I also feel as though they make a little too much of the ospreys, and not really enough of the nature reserve as a whole. It is after all entirely possible that the ospreys won’t return one year. What will they do then? The nature reserve will still be there, the other plants and animals will still be there and the habtiat will still be as interesting, but all of a sudden the main attraction will be gone and no doubt it would become a quite, little known reserve again, just one with a large 360º viewing observatory stuck in the middle of it! Hopefully that won’t happen, but with so much going for it maybe it should be billed more as a nature reserve than an ‘osprey project’, and more should be made of the rest of the habitat rather than just concentrating on a single species.

It is of course well worth visiting and there is no reason why you can’t take more of an interest in the rest of the reserve yourself, but it is very much based around the ospreys at present.

There is also now a charge to get in. It’s very reasonable at £2.50 for adults and free for children. It is however a little annoying that they take great pains to tell you that it is a voluntary contrubution to help keep the reserve running, but then have someone stood by a till taking your money for two adult tickets. Why not just charge £2.50 each and be done with it rather than pretending that you have a choice as to whether or not to pay, or make it a proper voluntary contribution where you just pop your money in a box. You can’t really have it both ways. Either there’s an entry fee or there isn’t and if there isn’t then there is no need to put the money through the till and issue receipts for adults tickets. We don’t mind paying for such things as they must cost a fortune to keep running, so if we were charged a ticket price on the way in we wouldn’t have thought twice about it. The fact that try to pretend that it is a voluntary contribution did however make us think about it and just irritated us a little.

We still had a nice time walking through the drizzle though and there were smiles all round.

We weren’t there long though and even after stopping off at the community shop in Tre Ddol for some supplies we were back at home after not much more than an hour or two out. Typically once back inside the drizzle stopped and the day brightened up a little. I cooked up a delicious Chicken Korma along with a carrot, cabbage, pea, bean and coconut curry which we ate with rice and home made naan breads. All washed down with some home made sloe gin and chocolate cheesecake before we settled in for a relaxing evening at home and planned our activities for the next day.