The Return of Jobs

I may be an Apple Fan Boy but I’m not referring to the return of Steve Jobs, I’m actually talking about a TrainerRoad workout called ‘Jobs’. It’s one I tried on January 23rd and came away from it annoyed as I didn’t manage to complete it.

In fact I came nowhere near. The workout only consists of 4x 6 minute intervals at 105% FTP so it should be quite achievable but last time I tried it I blew up halfway through the third interval and could get nowhere near the targets on the third interval. Rubbish really, but not one to give up too easily I decided to revisit it yesterday and this time I’m pleased to say that I managed all four intervals at the target power outputs and even picked it up a little towards the end of the fourth. 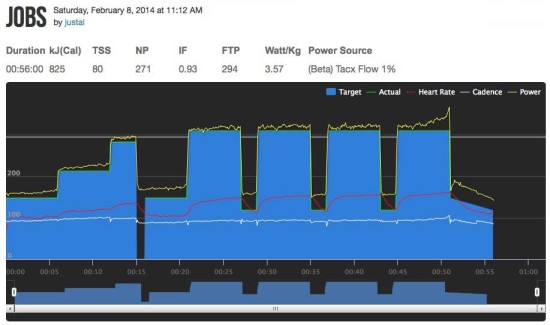 It’s not that impressive as 4x 6 minutes at 105% of FTP should be easy and it certainly wasn’t that, but it’s definitely an improvement on the previous attempt so I’m happy with that.

Today’s training sessions went OK too. The first was a 10 mile run around the Penrhosmawr Loop in very blustery conditions. The aim for this session was three 10 minute intervals at an increased pace. I’d set my Forerunner 910XT to target a pace of 6:45 mins/mile or quicker for the intervals, with a 5 minute rest between each. 6:45 mins/mile isn’t that fast but I have to start somewhere and last time I tried something similar a few weeks ago I could get nowhere near the target pace, so I wasn’t sure how well I’d do today.

The first of the intervals started off quite well aided by the wind so I was well within the target zone, but I soon had a little climb and a short descent, both of which slow me down. I then turned into the wind and it was a bit of a struggle staying under the 6:45 min/mile pace but I managed it with an average pace for the 10 minutes of 6:39 mins/mile.

The next 5 minutes rest went by quickly and I was soon into another harder effort. Again there were a few little climbs and descents to mix things up and some brutal headwinds, but this one was slightly faster at 6:32 mins/mile. The third was hard with a steep little climb not far into it but once again I managed to stay within my targets, and averaged a 6:40 min/mile pace for it. So, all in all a successful run as I achieved what I had hoped for. As I say, it isn’t that fast and the 20 minute run back to the leisure centre after the hard efforts seemed to go on for ever, but it’s a start.

Next up was a swim, so after a few lengths warmup and some drills it was into 4x 600m with the aim of increasing my speed on each one. Here’s how I did:

Not bad though and once again I hit my targets so came away feeling as though I had just had two good days training. Lets hope I can keep it up, although at the moment I feel as though a good sleep is in order! I did at least earn my bacon sandwich in the cafe.