Another nice new recipe for us thanks to thespicery.com. This time it was courtesy of a free sample that came with my last monthly box for Kathi Rolls, also known as ‘Egg Rolls’ or ‘Frankies’. 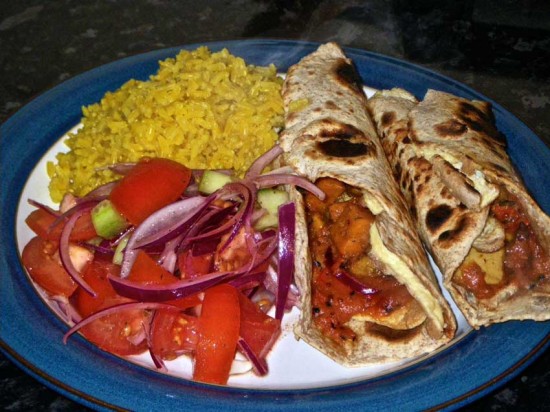 Usually when making a recipe for the first time I follow the instructions as close as possible to the letter (ingredients permitting), but with things such as curries we usually end up modifying them a little to suit us. That usually involves adding more veggies and sometimes reducing the amount of meat in the recipe. So this time I just did that right off the bat.

The recipe card called for 600g of diced chicken, but I cut that down to 400g and added another 400g of diced butternut squash instead. Adding extra vegetables has a number of advantages as far as we are concerned.

Healthier, cheaper and more of it, what is there not to like about that!

The recipe was fairly labour intensive and was made even more so by the fact that I decided to make my own Parathas as well. First there was the dough to make for the parathas,  then the chicken and chopped butternut squash was marinated along with some lemon juice and marinade spices from thepsicery.com sachet. This included:

Once the butternut squash had been choppen into bite-size pieces I simply treated it in the same was as the chicken. Then I marinated some sliced onion with more lemon juice and the Chaat Masala sachet.

Next I had to fry some onions and then add chopped fresh tomatoes, salt, vinegar, sugar and water and cook that along with a sachet of ‘Chutney Spices’ containing

This bubbled down to a thick sauce which was then blended. This tasted delicious really rich and really sweet with a little bit of a kick from the chilli.

Whilst that was bubbling away I added half of the marinated onion to the another 3 chopped tomatoes, some chopped cucumber and salt to make a salad to serve with the kathi rolls.

It was then time to dry fry the parathas so that they were ready to use and cook some rice. At the same time the marinated chicken and butternut squash along with the marinade was fried until cooked through and beginning to brown around the edges. The butternut squash was now soft and beginning to caramelise too. Once all of that was done it was finally time to start assembling the kathis rolls.

Each Parathas was warmed in a dry pan and then some beaten egg was poured onto one side before they were flipped so that the egg cooked forming a parathas with a thin omelette on one side. Once the egg was cooked it was flipped back over and some of the tomato chutney was spread onto it, topped with some of the marinated onion and some of the cooked chicken and butternut squash. Each parathas was then rolled up like a fajita to form a kathi roll and placed in the oven to keep warm until they were all done.

The recipe was enough for 8 kathi rolls so we I assembled 4 on Friday and we two each for dinner on Friday evening along with rice and the salad. Once again they were delicious so it’s another thumbs up for a recipe from thespciery.com. The remainder of the salad, cooked chicken, tomato chutney, marinated onions and parathas were then put in the fridge so that on Saturday all I had to do was cook some rice, reheat the chicken, whisk up some eggs and fry the parathas again then assemble each kathi roll.

They were new to us and very nice indeed. Adding the butternut squash worked fine. The egg adds a dimension to the finished dish and the chutney gives a lovely sweet taste to the rolls. Very much recommended once again.