The recent storms have led to extensive damage all along the coastline of Mid Wales. Aberystwyth has probably been hardest hit with the Victorian Promenade being all but destroyed. There are countless photos all over the web and on news bulletins of the damage both during and after the storms hit, so I’m sure you’ve seen these. The sea wall has been ripped to pieces. The shelter opposite the Marine Hotel has collapsed due to the waves gouging a hole into the sea wall and undermining the prom below it. Flag poles, benches and other installations along the prom have been ripped up and tonnes and tonnes of sand and shingle have been deposited all over the prom and on the road behind it. The entire promenade seems to be under several feet of beach and many properties have been flooded.

I haven’t been in to Aberystwyth to see it for myself yet, but the photos all over the web paint quite a sorry picture. How the council will afford to rebuild the prom I don’t know, but the clean up will have to start soon and will no doubt take a long time to complete. I wonder if the prom will ever be the same again or if they’ll use it as an opportunity for change?

Of course many people jump on the ‘global warming’, ‘increasing storm intensity’ band-wagon, but I’m not sure if that is the case. This kind of storm damage isn’t unprecedented. Photos of a similar storm event in 1927 look almost identical to those of the recent days. The prom was all but destroyed then, so it has happened before, and will no doubt happen again. There has however been some talk of breakwaters and such like to help limit the damage next time a storm like this hits, but whether or not that comes to fruition remains to be seen.

A little further North in Borth and Ynyslas, we too were hit hard by the storm. It’s difficult to say how well the new coastal defences in Borth worked, but it does seem as though the worst of the damage was either to the south of the defences, right down by the lifeboat station or to the north of them by the toilet block opposite the railway station. Here the sea over-topped the wall, flooding the road down to the station. The retaining wall around the little grassy area just behind the beach here has been destroyed and once again, sand and shingle has been deposited all over the road through Borth.

The Golf Course has been strewn with debris and the wooden sea wall along it has been breached in many places with large holes ripped into it in some locations.

Here in Ynyslas where we have only natural sea defences of a shingle bank and sand dunes we seem to have fared better. That isn’t to say there isn’t any damage and the beach has certainly been re-sculpted. I’ve been for a little walk along the beach and I’d say we now live about 10m closer to the coastline than we did a few days ago. The entire beach seems to have moved inland. 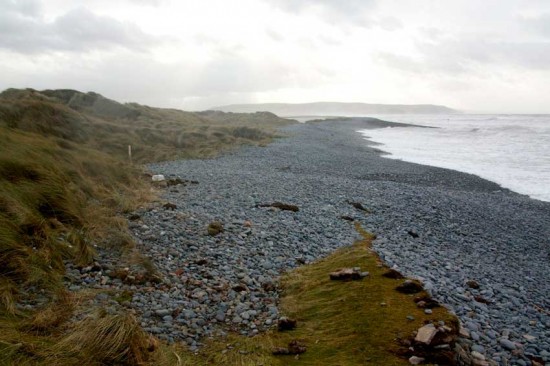 The dunes have been eroded back by about 10m. These dunes below used to slope gently down to the beach but have been undercut and eroded by the storm. 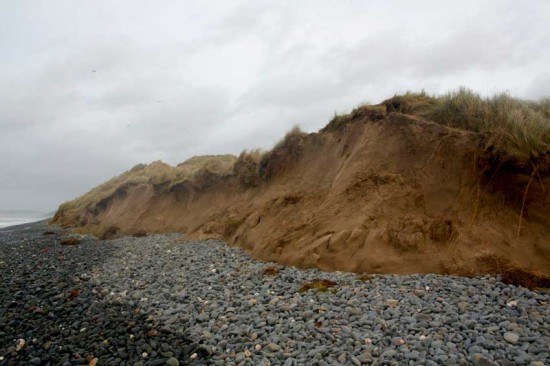 The path through the dunes has been washed away, along with the signs and information boards. 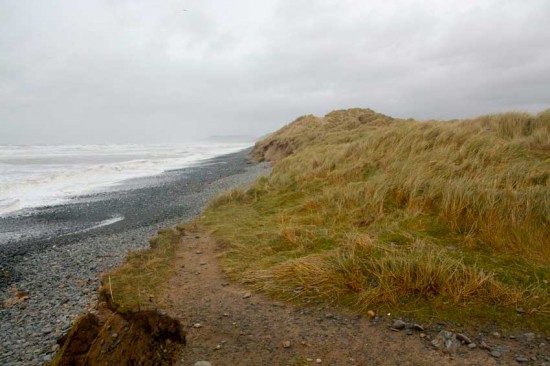 The car park is still a lake, there is rubbish and debris everywhere and the sea wall has been badly damaged in a number of places

The natural coastal defences may have protected the houses behind them at Ynyslas, and for that we should be thankful, but they are looking quite fragile now. I’m fairly certain that repairing them and improving the defences along here will be a fairly low priority, so we can only hope that they hold next time a storm like this hits.

Mother Nature has given us all here a potent reminder of the power of the sea.