Beekeeping Records and a Garden Update

The garden has been growing like mad. I was only away in Turkey for a week but it seems as though everything has become overgrown whilst I was away and I haven’t had much chance to get out there and get it under control. It’s not as bad as it sounds though, just that all the borders and beds seem to be full to the gunnels with each plant fighting for its own little space. I like it when everything in the garden merges together, but I also like to have some order as well. I guess it’s this conflict that keeps me busy and forever tending to it.

While I was away our new bee colonies arrived as well. I had hoped Anna would bog about the process of installing the nucs into their hives but I don’t think it was too eventful. As you may know, we lost all of our previous colonies over the winter. We went into the winter with one strong colony and one weak one. The weak one died early on but the strong one looked good and seemed to have done well, but it too died in March so we have had to start from scratch again with our beekeeping exploits. The slow start to Spring and Summer has meant that the nucs we were buying were about a month later in being ready than normal, but they turned up whilst I was away and are now settling in at the bottom of the garden.

We have one that was transferred from the nuc box into a hive straight away and a slightly smaller colony that is still living in a nuc box that I will transfer soon. The nuc box has been placed on the stand in the position that the hive will eventually be though so that we can move them into the hive without moving the location of the colony. 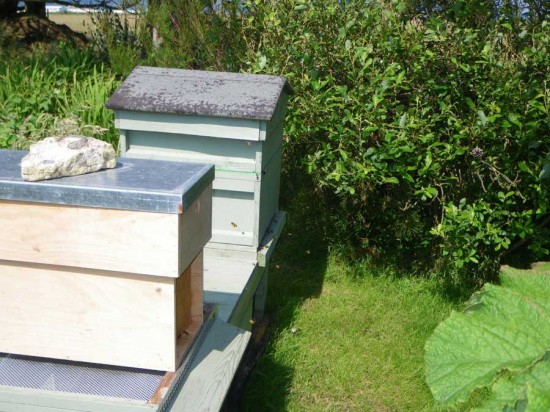 Bees at the Bottom of the Garden

The arrival of the bess and the first inspection that I did on Monday means that it is time to start keeping beekeeping records again. I was quite good at this in the past, using both online resources and paper beekeeping records to do the job but there is a dilemma with such things. Most record sheets and online management tools allow you to record the details of a individual hive, but is that the right thing to be recording? What exactly is a ‘hive’? By my reckoning it is just the box that a colony is kept in. So for instance, at the moment we have two hives, a National Standard hive with one colony in and a Nuc box with another colony in it. However, we will be moving the colony in the nuc box into a new hive soon.

Maybe it would be better to keep records for the colony instead. That way when I move them from one box to another the colony remains the same and I can just record the fact that they have been moved to a new container. This method has its own problems though because what do I do when the colony swarms or I perform an artificial swarm. Presumably then the colony has been split and I will have to start records for the new colony but which one is the new colony and which one is the original? Really the original colony should be the one that has swarmed and therefore has the old queen at it’s helm, but that will then be in a new location while the hive and location that contained the original colony will now have a new virgin queen and should therefore have new a new record sheet and be set up as a new colony. Using this method I guess I’m recording the queen rather than the colony but surely then I’ll need new record sheets if ever that colony is re-queened. Maybe it would be easier to have a record sheet for each hive location instead and just record whatever happens to whatever colony happens to be at that particular location.

So many options and I’m not sure which is the best approach. I guess the important thing is to be consistent from hive to hive, colony to colony, queen to queen or location to location and to keep good meaningful records that we can refer to in the future. I’m about to start the records for our new colonies but haven’t quite decided how to do it yet.

It’s good to have bees at the bottom of the garden again though and the garden seems to be coming along nicely. There are flowers a-plenty and even some strawberries ripening too. Here are a few quick snapshot I took in the garden a second ago.