I haven’t been able to continue with my coast path run for quite a while now, but I finally got back to it on Saturday. Previous Coast Path runs had been in the 10-15 mile range but after covering 25 miles whilst re-doing the Llanrhystud to Furnace sections of the Coast Path a couple of weeks ago as part of the Welsh1000 Walk I thought I’d see how far I could make it today. It was the Welsh1000 Walk that got me running the Coast Path in the first place. Now it had upped-the-ante with the distances I was covering.

I started in Talybont, exactly where I finished last time. It was a sunny but cold morning with loads of snow on the hills on my drive there and temperatures when I got out of the car of 1ºC. I wrapped up warm with hat, gloves and jacket and set off onto the coast path as the early morning sun shone through the trees. 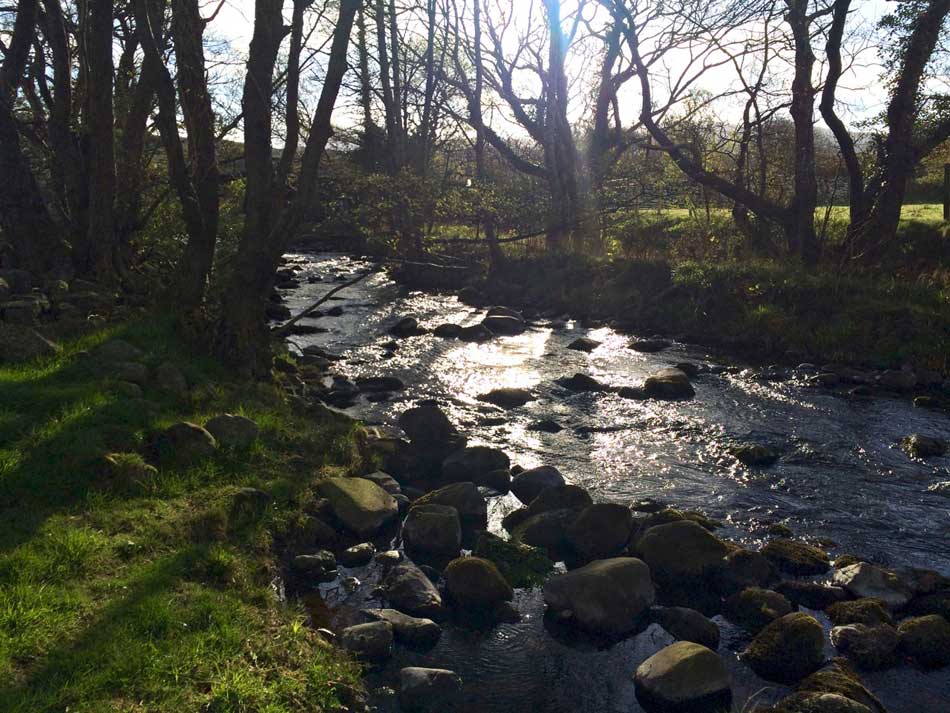 Morning sunshine on the Coast Path

The first section weaved its way along the banks of little streams and then zig-zagged across a number of fields all bordered by lovely light grey coloured stone walls. The sheep were waking up, but other than that the tracks, fields and farm buildings were all mine. 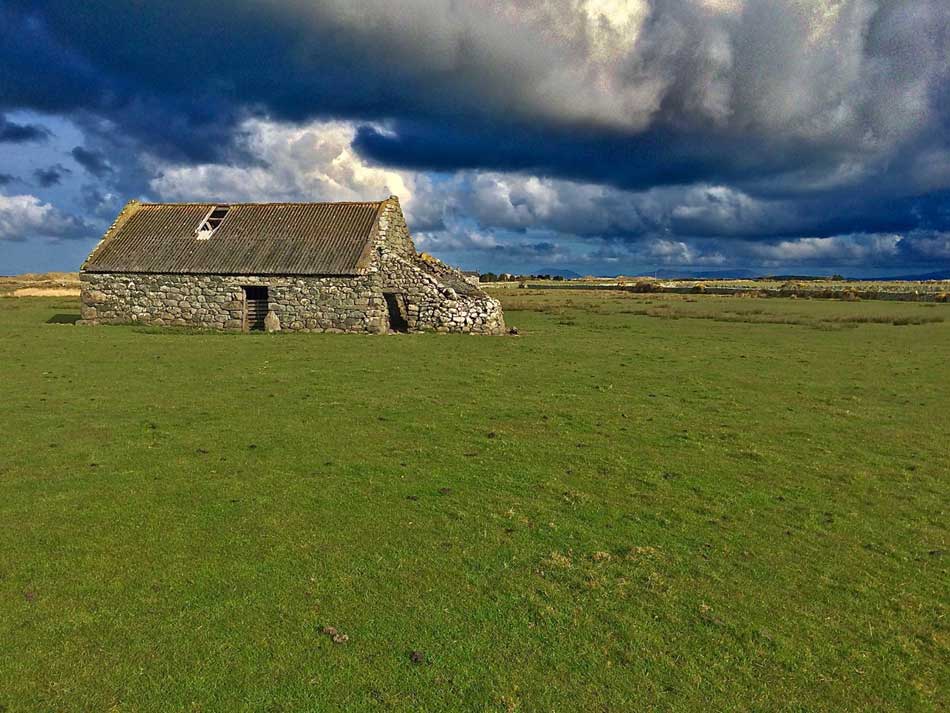 Before long, well after three miles of weaving through fields and climbing over stiles I emerged out onto the sands of Morfa Dyffryn and a landscape that looked very familiar. I was tempted to do a bit of nude swimming or sunbathing, but it was still quite chilly so decided against it!. 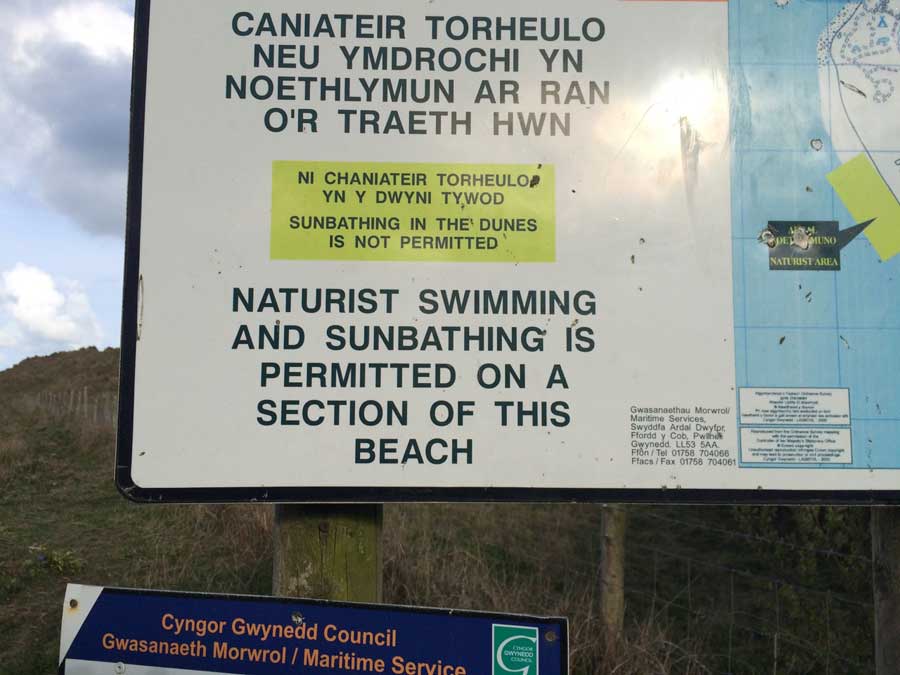 Time for some sunbathing

It looked just like the beach at our house in fact. Soon the dunes to my right were quite a bit taller though, looming over me as the biting cold headwind picked up. I’d taken my jacket and hat off in the sunshine earlier but the cold wind soon had me putting it back on as I ran along the sands looking for the firmer areas when I could find them.

On and on the sands went until a few miles later I turned right into the camp site at Shell Island and then weaved my way through the dunes and slacks where campers were just beginning to rise from their tents. The coast path then tracks it’s way all the way around the edge of Llanbedr Airfield and along a quiet road before once again heading off along a little river (Afon Artro), over a lovely little footbridge and then weaving its way along the banks of a tidal inlet. It was a little muddy here with plenty of little holes to fall into so I took it easy. So far, the going had been virtually flat as well.

Finally there was a bit of an incline though as I ran past a little church right on the beach at Y Maes and then up into the village of Llanfair. From here the Coast Path took me along the road a little way before dropping down over the cliffs and across the railway line once more to the sandy beach of Harlech. 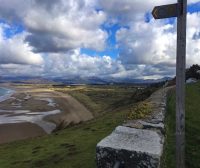 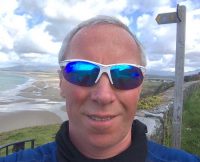 This led to more running along the sands before heading inland over the dunes and across the golf course towards Harlech. 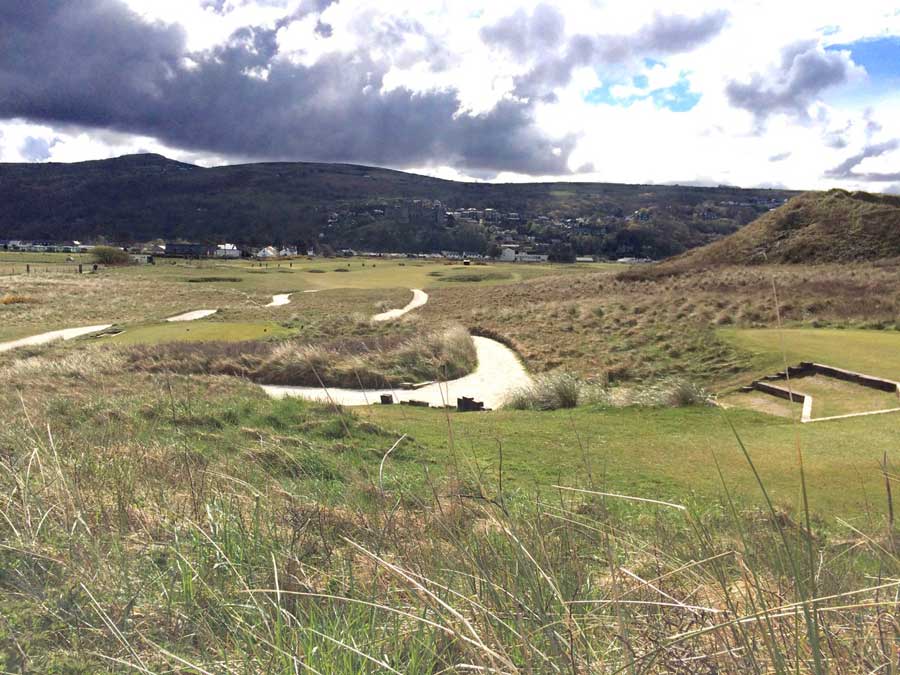 I had planned to stop in Harlech for a coffee and some cake but the Coast Path didn’t take me into town and I soon found myself running through a nature reserve and then through birch and willow woodland with paths lined by bright yellow gorse and broom. My route then had me negotiating electric fences, herds of cows and numerous gates as it took me through some farms and out onto the southern banks of the Afon Dwyryd Estuary. I’d never been here before and it looked lovely, with some amazing views out to the Italianate village of Port Meirion and the island of Ynys Gifftan.

The terrain become a little rougher here with a few ups and downs too as it made its way around an old church. I then missed a little footbridge over a river and instead crossed the railway line and added a little section onto my run as I crossed the river at a road bridge further upstream. I therefore ran first along the embankments on one side of the river and then back along the embankments on the other side. Next was a long stretch along the edges of the salt marsh on uneven ground all the way to the large road bridge across the River Dwyryd. 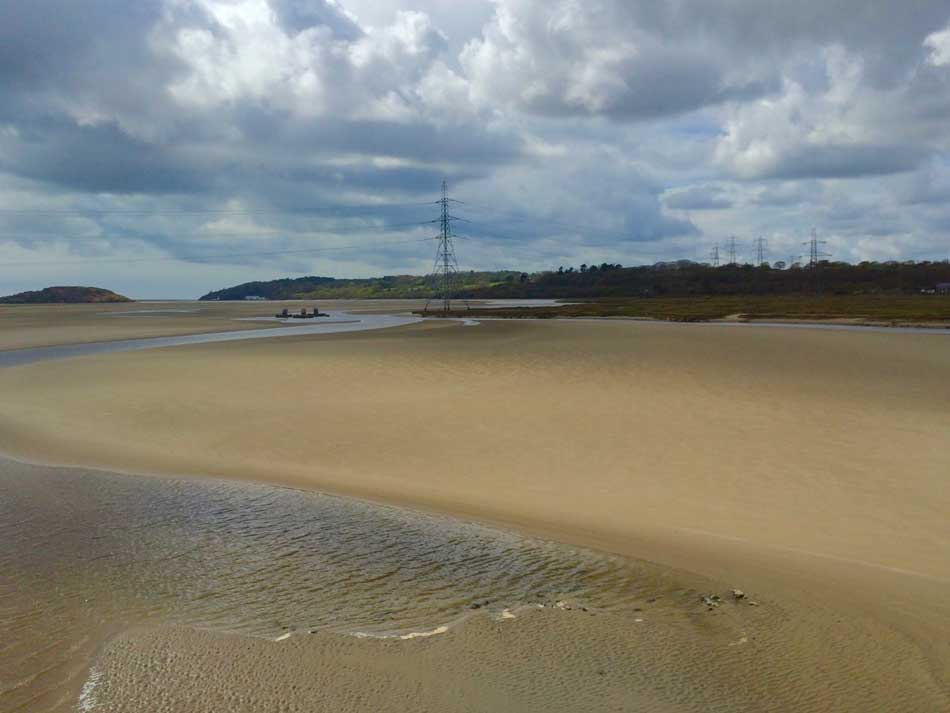 At Penrhyndeudraeth I made the decision to push on towards Porthmadog. I based this decision on the train times but it turned out that the train times I had were wrong, but it didn’t make any difference in the end. I should have stopped at the shops here to get some drinks but continued on my way through the town and then out onto the old main road before heading once again out across fields, along little lanes and through some woodland towards Port Meirion. The paths then took me up and down the wooded hills here a little before finally descending to the south-eastern end of the Cob. Porthmadog was now not far away and the end was in sight.

The Cob is a man-made causeway built across the Afon Glaslyn by William Alexander Madocks and opened in 1811. The mile-long causeway carries the A497, together with the LÃ´n Las Cymru cycleway and the Ffestiniog Railway. It seemed a lot longer on foot than it does by car though and eventually I emerged on the other side into the hustle and bustle of Porthmadog. I made my way through the town dodging shoppers and holiday-makers as I went. As I approached the railway station, the level-crossing lights flashed and the barriers came down – NO!!! Please don’t tell me the train was just about to leave. There was nothing I could do if it was, but thankfully as I approached the crossing a train heading north (the opposite direction to which I needed) pulled into the station. Phew, not my train! 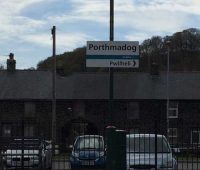 Made it to Porthmadog 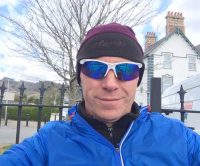 Waiting for the train

I checked the train timetables at the station and I had about an hour until my train so I phoned Anna to let her know where I was and then headed back into Porthmadog to get a nice big coffee and some food. I then sat on the station waiting for the train which took me back to my car.

Another good day on the coast path and with just over 26 miles covered, the longest run not only of my Coast Path capers, but of my life too.