A Hard Day in the Garden

Well, as predicted it was indeed a gorgeous day today, and after a solid 12 hours working in the garden my back is killing me and it’s time for a well-earned rest.

I started off with a little bit of gardening at 6am this morning, doing quiet things like weeding so as not to wake the neighbours. I soon moved on to clearing out behind the sheds around the back of the house. The Ivy had gone mad and was taking over the world, and the sheds themselves needed sorting out and moving a little bit. This meant dismantling them slightly, sorting out all of the junk and clearing out the entire length of the area behind the house.

Anna and Morgan joined in once they were up and about and we all worked at it all day long, stopping briefly for cheese and biscuits for lunch. It was hard work to say the least but it looks much better now and should be easier to keep that way. I also have a complete car-load of junk ready to go to the tip – why did we keep half of that stuff in the first place. There is an issue here though because now that we’ve put it all in the back of my car, the back door has jammed shut so we’re not sure if we’ll ever be able to get it out. If you hear lots of shouting coming from the tip in Aberystwyth tomorrow it’s us doing our best to empty the junk via the passenger doors. There are some things that definitely won’t come out that way though so I’m not sure what we’ll do yet.

The big shed could do with a good clear-out as well but I’m not looking forward to that so will save that for another weekend.

Finding Morgan jobs wasn’t always easy but once we got him cleaning my Surf Ski he seemed pretty happy. What do you expect if you give an 8 year old a hose pipe to play with. I’m not sure how clean the ski ended up but he seemed to be cleaning it for most of the day! 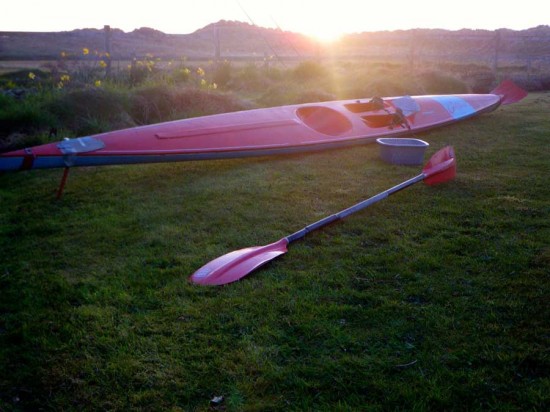 We had planned to have a go at clearing our Dave and Sarah’s greenhouse as well so that we can use it to house some seedlings and cuttings ready for the Scouts to sell at the summer charities fete  later in the summer. By the time we’d done all the other things though there just wasn’t time to get around to it. We did use their bonfire area to burn a load of rubbish though so kept looking at the greenhouse as we passed, we just never quite plucked up the courage or energy to tackle it – Maybe we’ll have to get the Scouts to do it before they can use it!

We also found a couple of frogs under the compost which kept Morgan amused for a while. He obviously wanted to keep them as pets but we managed to discourage him. Morgan has now fallen asleep in front of the TV whilst watching Doctor Who, Anna will no doubt be doing the same on the sofa soon. I’m thinking about doing some baking though. 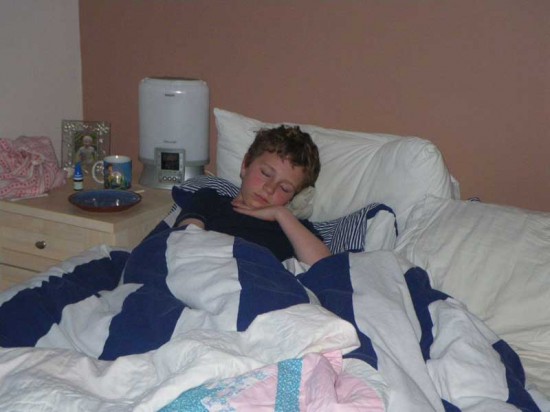 Whilst in the garden it was good to see the signs of Spring once again. Spring has been a very long, slow process this year and things that should be flowering are only just coming out into leaf. We still have some daffodils that have only just got buds on them and are yet to flower, whilst others have been flowering since January!

The Parsnips, Spinach and Onions seem to be doing well in the raised veggie bed, the soft fruit all have new leaves bursting into life, the Marsh Marigolds are brightening up the bottom of the garden and the Aliums that we planted last year along the conservatory wall look as though they should put on a good show again this year. You never quite know how well things will do here and sometimes its a case of spending time and money planting something only to see them slowly reduce in numbers and vigour over the course of a few years. Other things of course flourish and start taking over and we’re hoping that the latter will be the case with the aliums. There certainly seems to be plenty of tiny little new seedlings in amongst the more mature plants so fingers crossed we’ll have even more next year.

The only trouble is, it looks as though today has seen the best of the weather and it will take a turn for the worse tomorrow, so after spending a whole day working in the garden making the most of the weather it once again looks as though we won’t have chance just to relax in it and enjoy it. Such is life here in West Wales and no doubt by the time we get another gorgeous sunny day at the weekend it will all need doing again!