Anna was out most of the day on Saturday, first taking the cat to the vet and then playing in a concert with the Aberystwyth Silver Band. Whilst she was out I had the urge to bake a cake… That’s the trouble with watching Saturday Kitchen!

It was a cold and very wintry late March day with a howling wind, snow flurries and deep drifts on the hills so Morgan and I were unable to go Mountain biking. Instead we had a roaring fire to keep going in the stove, had been building a meccano models all morning and decided to have the run of the kitchen in the afternoon. We had been having weird power cuts all day as well. The TV was working but nothing else was but by 1pm it seemed to have settled down enough for me to brave using the oven.. Until now we had been boiling water on top of the stove for cups of tea.

I took a look through the ‘Winter’ section of the Volcanic Cookbook that we had brought back with us from New Zealand and liked the look of both the Pakistani Curry and the Lemon and Poppy Seed Cake. We didn’t have any beef for the curry, so a nice sweet cake it was. It was a fairly standard cake mix with lots of lemon and lime zest, poppy seeds and a glorious lemon and lime syrup glaze.

So far the recipes we have cooked from this book such as the lemon curd cake have been a little hit and miss. They have all tasted nice but many have turned out looking a little different to expectations. We didn’t actually follow the recipe precisely this time. We didn’t have any baking powder so the plain flour went back into the cupboard and out came the self-raising flour. Castor sugar was replaced with normal granulated sugar and instead of butter we used Flora Buttery. Morgan decided he was having nothing to do with it at this stage and went back in front of the fire.

So, my cake mix ended up looking like this.

After beating the flora, lime and lemon zest and sugar until light fairly creamy I added the egss, beat them into the mixture and then gradually folded in the flour, poppy seeds and yoghurt. This was then poured into two loaf tins and baked in the oven for 30 minutes at 180°C.

I then made a lemon and lime juice syrup from

by simply dissolving the sugar in the juice in a pan over a low heat whilst stirring. Once dissolved I turned up the heat and let the syrup boil for a few minutes before pouring it over the warm cakes. I did top the cakes with some decorative slices of lemon first and the syrup formed a delicious glaze over the tops of these and soaked into the perfectly moist cake. 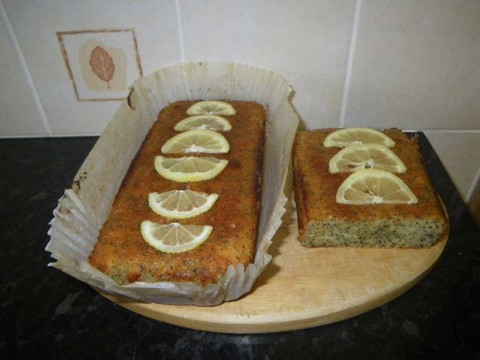 Anna arrived home just as I finished the cakes so we had a slice while they were still hot. Anna had been shopping so we had some steaks for dinner and she had bought some beef skirt ready for me to try the Pakistani Curry recipe tomorrow. After a dinner of steak with Cassava, Carrot and Swede we then finished off the lemon and poppy seed cake. Having made them I might be biased and as  bit of a cake-lover I was always going to like them whatever they looked or tasted like. However, they looked and tasted perfect and the fact that they didn’t last long proves than Anna and Morgan felt the same way.