We woke up a bit later than usual today, had breakfast in the camper and then had our final soak in the pools at the Waikite Thermal Valley complex before heading ever onwards on our road trip around New Zealands North Island.

We drove into Rotorua again, this time to do some activities, either a maze that Morgan wanted to do or a ‘Canopy Tour’ that involved a forest walk and some zip wires. We checked out the Canopy Tours HQ first to get the low down on the tour. I didn’t really expect Anna to want to do it, especially after her SkyTower experience but she seemed really keen. The tour involved walking through an undisturbed area of forest, crossing some swing bridges and zip-lining through the trees, all hooked up to safety wires of course. As well as the adrenalin-pumping side of things there was an environmental aspect too as the tour guides would point out various trees and wildlife and give a talk about the various threats to New Zealands endemic species.

It was one of the more expensive things we had done whilst in New Zealand but Anna seemed really keen and we managed to talk Morgan into as well (he still wanted to go to the maze). We booked places for the afternoon and then headed into Rotorua city centre for a walk along the lake and lunch in the museum. My parents had raved about the beer-battered chips in the museum cafe so we had to check them out. They were nice as chips go but a little too salty for our liking and certainly not that special. The quiche, coffee and cakes were nice though. 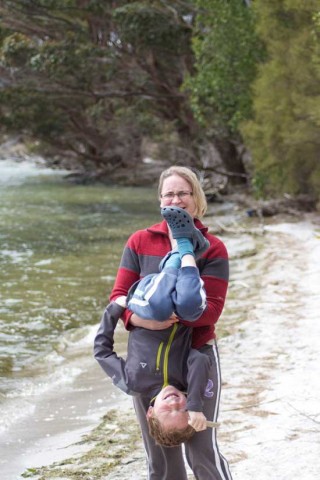 On the shore of Lake Rotorua 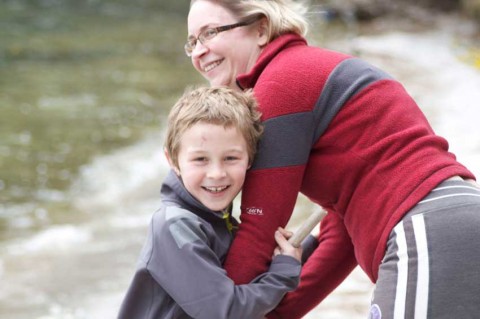 It was then back to Canopy Tours HQ to get kitted up with helmets and harnesses before jumping into the minibus for a short ride to the forest. 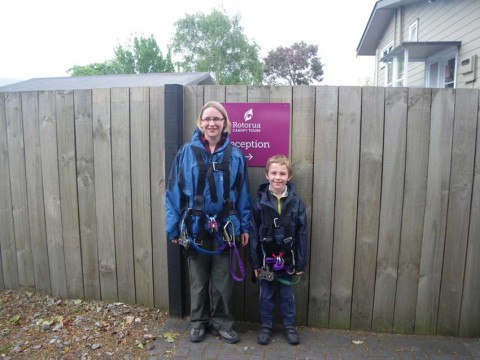 The guides (Gary and Colin if I remember correctly) were really nice and tried to get us to know each other on the way there whilst telling us a little about themselves too. Once we got to the forest it started to rain, and rain quite heavily at times, but once under the cover of the trees we barely noticed it so I guess it was a good activity to be doing considering the weather. If we hadn’t already booked we may not have bothered and would probably now be sat in the camper or wandering around the museum trying to avoid the rain. Instead we were soon hooked up to the safety wires with a number of carabiners and about to throw ourselves of wooden platforms in the forest along Zipwires.

Al on the Edge

Look how high we are!

There were 6 or 7 zipwires in total, the highest reaching heights of 40m and the longest a massive 220m long. There were also a couple of swing bridges to traverse. I was pretty surprised by Anna’s enthusiasm for the whole thing and impressed that she was happy to jump out of the trees, obviously keen to make up for here recent failings at the top of the SkyTower. Morgan seemed to be loving it too and I’m sure he was secretly glad we chose this over the maze – although he probably won’t admit it. I had fun too, the zipwires were good and it was good to see Anna and Morgan loving the exhilaration of it all.

Morgan on the Bridge

Morgan on the Zipwire

Morgan in the Treetops

Anna on the Zip Wire

Anna in the Treetops

Anna on the Swing Bridge

Anna on the Bridge

The environmental aspect of it was well done too. The guides were enthusiastic and clearly believed in what they were doing with the forest, they were knowledgable and it wasn’t too patronising as they told us about the main threats to the endemic birds and what they were trying to do to manage those threats. The 3 hours (including bus trips at either end) were over too soon though and we were soon back at HQ and heading off on our own separate ways with the promise from Canopy Tours of sending us the photos they took via Facebook. A much better way to do things than to charge you extra for photos and of course it provides them with lots of publicity because we then share the photos with our friends on Facebook too. 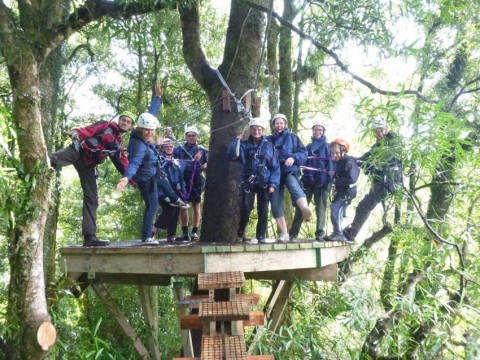 We now had time to head back into central Rotorua so that I could sign up for tomorrows bike race around the lake. We had pizza for dinner from the Pizza Hut, again thanks to their super cheap $4.90 large pizzas there was a little leftover for tomorrows breakfast. We then headed off to the town of Ngongotaha on Lake Rotorua’s west coast to find the campsite that I had in mind for tonight.

The campsite, Waiteti Trout Camp, was on the banks of the Waiteti River, a trout river that discharges into Lake Rotorua. It was in a quiet location within a housing estate in the town and had the added attraction of free use of kayaks. Morgan had been wanting to kayak all holiday and we had promised he would be able to, and I’d been looking forward to taking him out on the water too.

So, as soon as we’d parked up we got into suitable clothes, donned our life-jackets and placed the sit-on-tops on the water. Morgan had never done any paddling before but he was a natural. I’ve seen people struggle for ages to get to grips with steering and paddling in a straight line but he managed it instinctively and we were soon making our way downstream on what was now a cold but dry evening. The river was fairly slow flowing and clear and now and then we saw some huge trout. The river is famed as a trout fishing river but I’m sure anyone would be pleased to catch fish of this size. 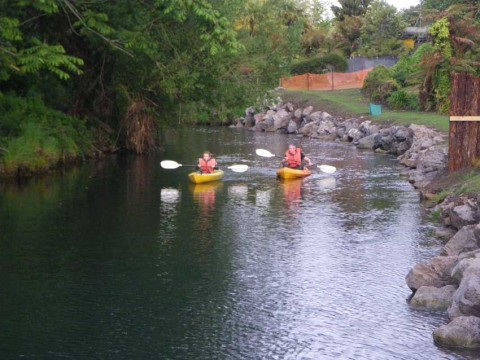 Anna walked down the river along a path on its banks and took some photos of us before we turned around to head back to the campsite. Morgan now had to paddle upstream rather than just float downstream steering – but once again he managed it admirably and we were soon back at the little jetty and on dry land. It was then off to the showers to warm up. The facilities here were all spotless and as with all the other campsites we’d stayed at fully featured, showers, toilets, kitchens and laundry rooms. Everything you could need really and free use of the kayaks – $40 for the night.

We had an early start tomorrow as I had to be in Rotorua for the Bike The Lake race by 7am so we had an early night in the camper.