Day four of our trip and we were now settling into Auckland. We aren’t really ‘City People’ but Auckland was growing on us. The CBD is very compact with skyscrapers everywhere and an amazing skyline. Getting around was easy and the whole place was buzzing with the energy of the ITU Triathlon World Championships.

The day started early for me as I was awake before 2am and then as soon as it was late enough to wake the others (probably around 5am) I started building my bike.

Once that was done, it was time for a hotel breakfast. My favourite part of hotel living and what a spread at the Rydges, numerous types of cereal, yoghurts, milk, and loads of tasty toppings. Bircher muesli, porridge, eggs, bacon, sausages, baked beans, mushrooms, hash brown, bread, toast, pancakes, croissants, fruit, smoothies, coffee, pastries and more. I did my best to hold back but did have quite a large breakfast, vowing to take it easy on the food for the rest of the day. I could have eaten more though if I didn’t have a race looming large. Morgan managed to pack away quite a bit as well which is highly unusual for him!

Next on the list of activities for the day was a recce of the bike course with a group of other athletes from Team GB. It was windy and threatening rain – and rain it did, torrential rain at times. The course was OK though, fairly easy with a few little rises, one or two short steep climbs and a few interesting descents too. Longer on the way out than on the way back and it would be on nice closed roads. Here’s the Garmin data from the ride.

As soon as that was over it was time for a swim familiarisation as well. So, it was back to the hotel, change and then walk down to the waterfront for a quick but easy swim around the course. The swim was held within the waters of Auckland harbour. These were at about 15ºC so were fairly warm for us but people from countries such as Australia thought that it was freezing. The water was calm too so nothing to worry about there and the course was an easy rectangular course around some huge, easy to see buoys. The 750m swim only took me 12:30 despite the fact that I was swimming as slowly and easily as I could. Anna and Morgan came down to watch as well and took a few photos. I was feeling a little better after the swim, still wondering quite what I was doing competing in a World Championships but feeling a little more confident now. 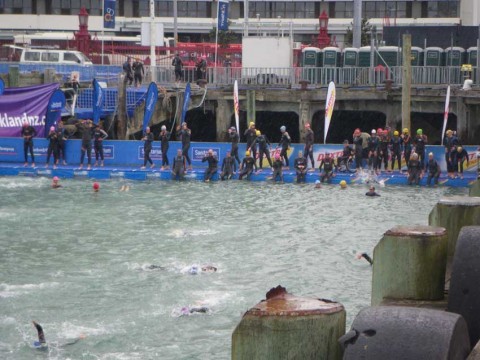 The swim was followed by a family lunch in The Cloud and a wander around the Expo with it’s various stalls and goodies to buy. I think we pretty much managed to resist temptation though, although I did get a CO2 canister and Morgan got lots of freebies. I may have popped a couple of energy bar tasters whilst no one was looking as well… Surely if no one sees then the calories don’t count?!

I then had to attend a team meeting in the hotel, which was just a formality really. The team manager read through the info that we’d already had in various athlete information packs. Mind you, then number of ‘stupid’ questions from other people in the room was astounding, you’d have thought some of them had never competed in a triathlon before. Anna popped out to the supermarket whilst I was in the meeting and had some fun trying to find something for dinner. Although food is fairly similar in New Zealand, and Auckland is a very cosmopolitan city, brands are different and there seems to be a lot more choice. A visit to the supermarket became a daily occurrence during our trip and there was always plenty of tasty looking goodies to try.

We then got a taxi to my parents new hotel and went there for a dinner of pork chops and salad, that we cooked for everyone, before returning to the Rydges for an early(ish) night. Day four of the trip over with already and our first full day in New Zealand. The race was getting ever closer and our days were packed full.