Friday evening they said, it’s only an hour or two each week – so we signed up and became Scout Leaders for Borth 2nd Scouts. They forgot to tell us that there would be several planning meetings a month, tonnes of emails to read and respond to and phone calls galour! On top of that we have to organise various camps, hikes and such like and each of those involves days of planning and even having to walk the routes ourselves to make sure they are suitable.

That’s exactly what we were doing on Saturday. Thankfully it was a gorgeous day, cool, sunny and clear. Anna, Morgan and I set off from Tre-Ddol on a route that I sometimes run. Or at least it’s a route that I run when I don’t have a stress fracture! When I run it I add on a few extra 1 mile loops and it takes me about an hour. For this route we wanted to cut it down to around 4-5 miles in length (not the 7-8 that I run) and I estimated that it would take us, and hopefully therefore the Scouts, about two hours.

The route is fairly simple and took us up through the wood behind Tre-Ddol, heading north towards Artists Valley. It crosses a road, goes through a field and fords a little stream before heading along a muddy track towards the main fire-road that goes all the way from the main road up the Angler’s Retreat. We join the fire road and followed it uphill for a while before turning right and heading along a rocky track that passes one of our geoachaches and has amazing views out over the Dyfi Valley.

Morgan was picking and eating blackberries as we went – There were loads of the tasty treats along our route. We were therefore going at a slow pace and stopped now and then to shake stones out of Morgans’ shoes, have a drink and eat some snacks. We stopped to check on our geoachache too – all was well.

At the end of the track we join a quiet country lane that takes us up and over the hills behind Tre Ddol before reaching the high point of the route with some nice views over Borth. It is then a steep descent down the road into Tre-Ddol to finish the walk. Despite all of the stops we got back to the car 1 hour and 56 minutes after setting off. My estimation of 2 hours was pretty good!

The Scouts should be a little quicker at it than Morgan as they are of course older, but they’ll be doing it in the dark so will miss out on the views and the darkness should slow them down a little – 2 hours should be spot on though, assuming the various logistical problems that always seem to be an issue actually allows them to do it. Now we just have to spend some time creating route cards for them to follow and drawing maps to give to them so that they don’t get too lost! 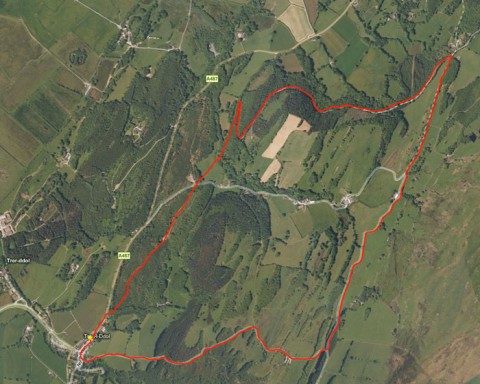