You’ve probably already read that I had a good race in the Pwllheli Triathlon on Sunday. I’ve now had chance to look through my data and I’m quite pleased with my run in particular.

I know you really shouldn’t try new things in a race, especially something such as new shoes, but that is what I did. I wouldn’t recommend it, but my excuses were that they are shoes specifically for racing in, not for training in, and this was a training race, not an important race. So, although ideally I would like to have had chance to run in them beforehand, I was using this as training and was trying out my new shoes in the type of situation that they are meant for. They seemed to work as well.

They went on nice and easily in transition and although they felt a little weird for the first few hundred metres I soon forgot about them completely and just got on with my running – just what you want from a pair of running shoes. They are a super lightweight pair of “Brooks T7 Racer” shoes, and a pretty nice colour too! 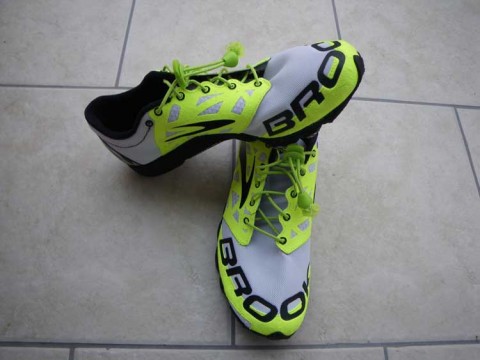 I also tried out a slightly new strategy. In a 5km race I usually do one of two things. I either:

1. Start off hard, decide after the first mile that I won’t be able to keep that up, so ease up a little for the next mile or so and then pick the pace back up towards the end, or

2. Start off easy and then gradually pick up the pace throughout.

OK, it’s not fast in comparison to many people, but it’s a PB for me and under that magic 20 minute barrier. It’s also shown me that I’m still capable of a sub 6 minute mile – If only I could keep that pace up for the whole 5km.

I had this 5:58 for a single mile in the back of my mind on Sunday and wanted to try to keep it up for the whole 5km. So, the plan was to start off hard but not too hard and try to keep up a steady pace for the whole run. This would require picking up the effort throughout the race as I started to tire but would hopefully give me a good time. The aim was to stay at a constant pace throughout.

It always takes a bit of time to get into your stride as you come off the bike and out of transition, and the route had a few little twists and turns at the start, but by the end of the first mile I was well into my stride, feeling as though I was running within myself and it was despatched on target in 5:58.

The second mile felt good, I was now running well and completed it in 5:55.6 – Yes, I’m being accurate here, right down to 6 tenths of a second and the reason for that is that the third mile was also ran in exactly the same time 5:55.6. Admitedly the third mile required more effort and I was starting to push hard, but as far as even pacing is concerned you can’t get better than that.

I then picked up the pace even more for the final quarter of a mile and sprinted for the finish line, running the final part of the race at 5:40 pace to give me an official time of 19:19. The run was slightly over 5km, but looking at my data and the auto 5km segments on Strava.com, my time for the 5km was a huge new PB of 18:28 at an average pace of 5:56mins/mile. I’m pleased with that.

Was it the new shoes? Was it the new pacing strategy? Or am I just getting faster? Probably a combination of all three and the race aspect obviously helps too. As always it feels as though it’ll be hard to beat that time anytime soon, but hopefully there is better to come.