I used to be a fairly good cyclist many years ago. Nothing amazing but I held my own on club runs, put in some decent Time Trial results and did well in quite a few triathlons too.

Other things in life then took over and I barely swung my leg over a bike for about 15 years, until I bought a new mountain bike a few years back. At the time I decided to get a mountain bike as it was clear that my cycling prowess was long behind me so I wanted to enjoy myself on my new bike rather than get disheartened about how much slower I was now. At least on a mountain bike it wasn’t all about the speed.

Things went well, I enjoyed riding in the hills and even started entering events so regained a bit of my lost fitness – Although I’m never going to be 21 again. Then last year my sister talked me into doing a triathlon for charity so out came the 20 year old road bike and I did a few rides on the road. Once again I wasn’t fast but I enjoyed it and soon thoughts turned towards a nice shiney new road bike.

And there the dilemma began – What bike to get. I could get something not too expensive that would have been fine, certainly better than what I had, would have made me a little faster, more comfortable and would have probably been the sensible thing to do. But you know me, only the best will do. Unfortunately I can’t quite afford ‘the best’, so I eventually plumped for a bike from Ribble. Now, some people hate Ribble bikes, but they do sell good quality bikes at amazing prices. They may not quite have the kudos of the big brand names and the frames maybe generic carbon jobs from China, but they can’t really be beaten as far as ‘bang for buck’ goes. The technical specifications all weigh up and the savings over the likes of Specialized, Trek, Giant and other big names brands are substantial.

I ordered a Ribble Stealth with Ultegra Groupset just after Christmas. It may not be quite as classy, have much pedigree, or as much roadside appeal as some of the more exotic bikes out there but it’s a modern, lightweight, stiff speed machine that would have been more bike than I’d ever do justice. Unfortunately Ribble had issues with the frames, so delivery times kept getting put back by a month, so I still don’t have it. Then earlier this week they discovered that the new batch of frames had been sent by sea rather than air so they would be yet another month and I’d be unlikely to actually have the bike until mid-late April.

I couldn’t wait any longer so cancelled my order and started shopping around again.

After a while it looked as though I was going to have to go with a bigger name brand and pay that extra for the class and pedigree of a bike used by the pros. In this case, a bike used by Mark Cavendish to win several Tour de France stages last year! Yes, I know it’s a little over the top and I’ll never again have the legs or lungs to really make this bike fly, but it will be nice just owning such a nice bike let alone riding it. Some people buy Ferarri’s or Aston Martins as part of their mid life crisis – I bought a Scott Addict R2 road bike instead. Surely that’s better? It’s certainly cheaper than a sports car and has to be healthier too.

Don’t worry though, I haven’t gone completely mad and it isn’t really the bike that Mark Cavendish used – That one (or as close as you can get) costs around £7,000, the one I’ve ordered is actually a couple of models down and doesn’t have nearly as good components. It also, thankfully, cost quite a bit less than that! 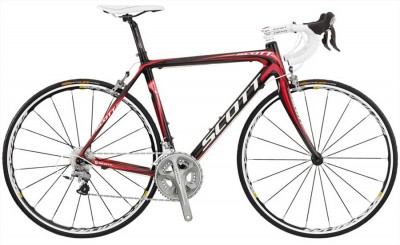