That didn’t quite go to plan

The conditions this morning looked awesome for windsurfing. A rare strong SE wind and some decent waves to give us 30 knots of cross-offshore winds and super clean, head high waves to play on. Perfect for down-the-line wave sailing and not conditions we normally get here as it’s usually cross-onshore so the waves are never so clean.

The wind was forecast to ease in the afternoon, but as Tom (a student from the university) was planning to come out for a sail at around 11ish I thought I’d leave it until 10am to head over to the beach so that I’d have someone to sail with later on in the session. I therefore spent the early part of the morning working hard and then twittering about how good the conditions were before heading over to the beach.

I rigged my Naish Hybrid Freewave board and 4.5m sail and got out there. The first run out was a little sketchy as the waves were pretty big and I was a little underpowered on the inside. I managed to punch out through them though and then headed upwind out the back where the wind was a little too much if anything. I was a little overpowered so dropped my gybe on the outside (a rare thing these days), but then the wind just switched off. There was barely anything left, not even enough to waterstart and as the wind was offshore I didn’t want to float around for too long trying to waterstart as I would have drifted out to sea. I therefore swam back in towards the waves where I got mashed by a big set, had a huge helping of ice-cream headache for good measure and eventually managed to get washed back to shore by the waves.

I rigged my 5.6m sail and gave it another go but by now there was no wind at all and I couldn’t get anywhere, although I did manage to get out far enough to get another rinsing and another good helping of ice-cream headache.

Not quite what I’d expected but I should know better really. There’s no point waiting around for others to sail with. When the conditions are good I should just get out there and make the most of it as they won’t be around for long.

Here’s the wind trace from my Borth Weather Station showing the exact moment it all went wrong for me! 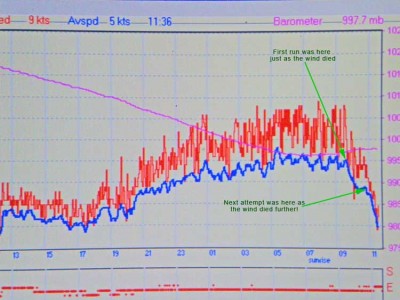