As mentioned before, things are looking goos as far as windsurfing goes this weekend and I’ve been hoping to have an attempt at my “Life Begins at 40 knots Quest“. The first of the winds arrived today but it wasn’t quite as good as hoped.

I headed down to the estuary just after high tide, it was huge tide so the entire estuary was full of water and with a 30 knot wind blowing it was choppy as expected. I thought I’d go out for a nice play in the chop on my wave kit as a warm up for the main event. I’d then rig my Speed Kit and have a proper attempt at some speed sailing.

I went out at first with a 5m sail and my little JP Wave board which was perfect. Well powered and I was having fun sailing around the estuary. It was never going to be fast though with all the chop and after an hour or so I’d hit a top speed of only 22 knots. Shem was out having fun trying to go fast on his kitesurf kit too.

Dave and Sarah joined us as the wind eased off so I had a few more runs on the wave board and then came in and rigged my biggest speed kit. A 6.3m North Warp and an 80 litre Mistral SL Red Dot. The tide had dropped by now and the speed channel was looking good, but there just wasn’t really enough wind. I had a few runs but it never felt fast and I was never properly powered up.

My top speed was actually 32.2 knots in the end which although it is a long way off the target of 40 knots is quite reassuring as that felt really easy and there will certainly be a lot more speed to come once the winds and tides come together. The tide was OK today and the wind was fine first thing but I need to get them both at the same time now. 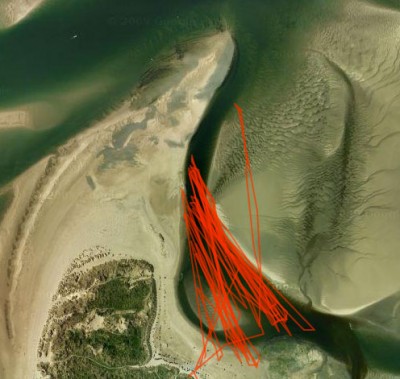