What a dreary old day that was. Mind you, a dreary day on the Wales Coast Path has to beat a sunny day at work so I can’t complain. Tuesday was my day for running along the Coast Path and this week I was running from the Menai Bridge to Conwy. An early start allowed me to leave home at around 4:30am for a drive through the mist, murk and rain of North Wales. Visibility was pretty low in places but it was a comfortable drive in my VW Touran hire car.

Running in the Dark

I arrived at Menai Bridge at around 6:30am and got changed but it was still completely dark. I hadn’t brought a head-torch with me and according to my Fenix 3 watch the sun wasn’t set to rise until 7:11am. I had a choice of sitting there waiting for it to get light or give it a go anyway and hope that the first few miles had some street lights. Judging by the pouring rain and low cloud it wasn’t likely to get light for about an hour… Anyone who knows me will know that I decided on just giving a go anyway. I had 22 miles ahead of me today so had to make a start and even if I ended up walking at least I’d be making headway. I did take a photo of the Menai Bridge as I set off as it was unlikely I’d be taking any other photos for a while. 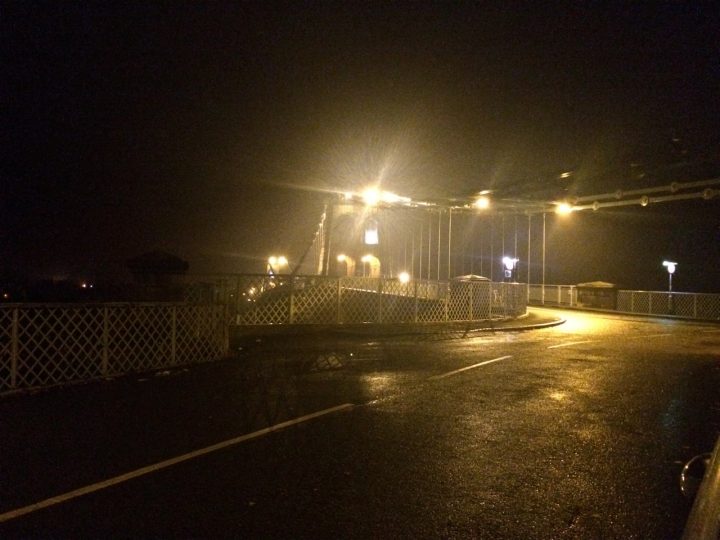 Street Lights at the Menai Bridge

The first half mile was fine as it was along a street lit road, but then the Coast Path took a left turn and headed along some paths that bounded fields. I was forced to walk here as I couldn’t see the path at all and making out the fence was difficult. Overhanging brambles kept hitting me in the face too as I simply couldn’t see them coming. Time for a selfie in the dark. Sorry it’s not the greatest of photos but no light and heavy drizzle aren’t the best of conditions for camera phone photography. 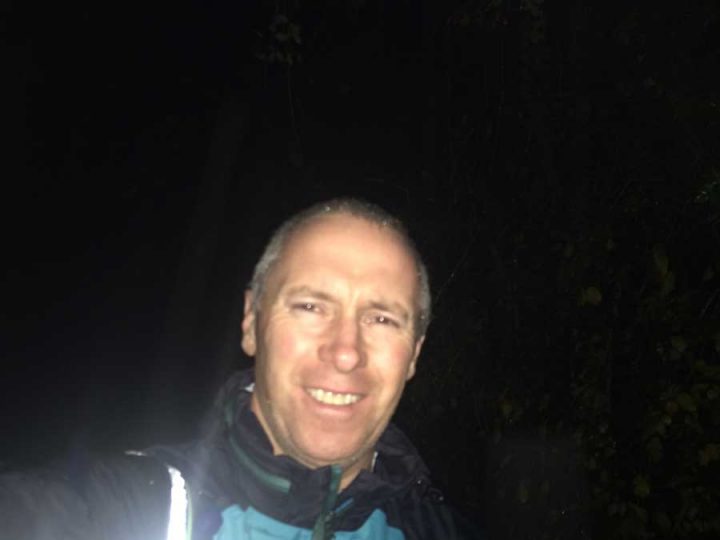 Selfie in the Dark

This was bad enough but then the fields turned into woodland with lots of steep descents and climbs. There were loads of steps down into dips and back out of them again. My pace slowed to a crawl. The steps were covered in slippery leaves and I could barely make out each step let alone what the footing on each was like. I tentatively made my way forward, testing each foot as I went and straining to see anything at all. Needless to say the going was very slow indeed. I was more concerned with staying upright than my pace. At least I was making some sort of progress. I could have been anywhere as I certainly couldn’t see what was around me, but the telltale calls of plovers and oyster catchers to my left revealed the presence of the Menai Straits.

Eventually the woods were left behind and I was once again able to run as I made my way through the streets of Bangor. There was now just enough light to see where I was going although it was still pretty grey and miserable. The rain was still falling and I was soaked through already. I could at least make out some of my surroundings now as a long pier extended out into the Menai Straits. As you can see, it was still pretty dark. 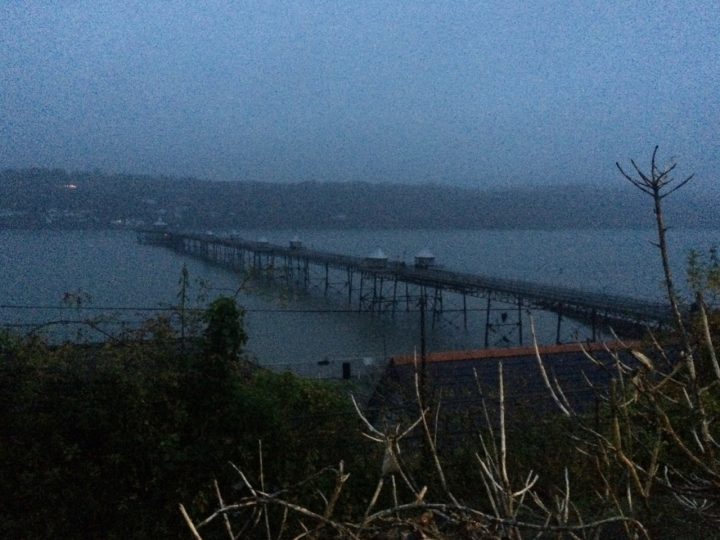 The Coast Path continued around towards a harbour and then dropped down across a little bridge at Abercegin. Here it turned right, under the road bridge and followed what once was probably  a railway line. The path headed quite a way inland here following the Afon Cegin. It seemed as though I was heading in the wrong direction and there were very few signs so I checked the map just to make sure. Sure enough, this was the right way as the Coast Path heads inland for quite a mile or so before turning left towards Talybont. The path took me under some impressive viaducts and bridges. As the light improved I could finally see the reds, oranges and yellows of the autumnal trees too. 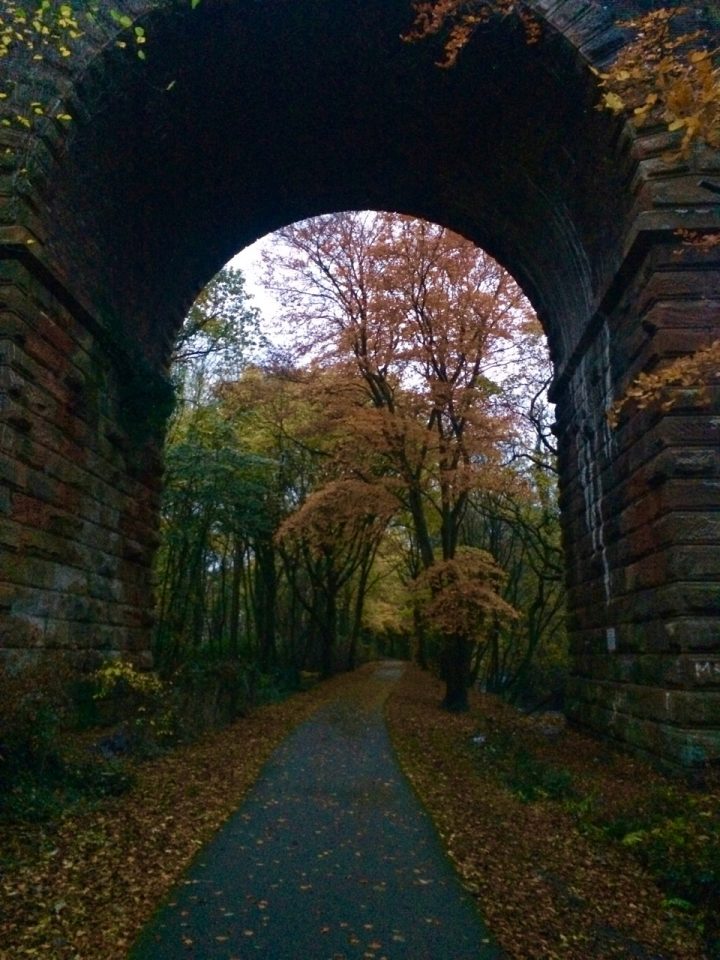 Eventually the signs took me left up onto some roads and then weaved its way across to the village of Talybont. Here the path followed the railway line for a bit and then went around a field before emerging out onto a small country lane. It crossed the A5 and then headed along another country lane heading once more for the coast. I followed this road and was now making better time. It took me past the Spinney Nature Reserve and finally emerged back out onto the beach at Aber-Ogwen.

The path was once again feeling like a Coast Path as it made it’s way for mile after mile along the shoreline. Sometimes the path was sandy, sometimes a muddy, grassy track and at other times it dropped down onto the pebbly shingly beach. There were at least occasional signs to prove that I was following the right path. 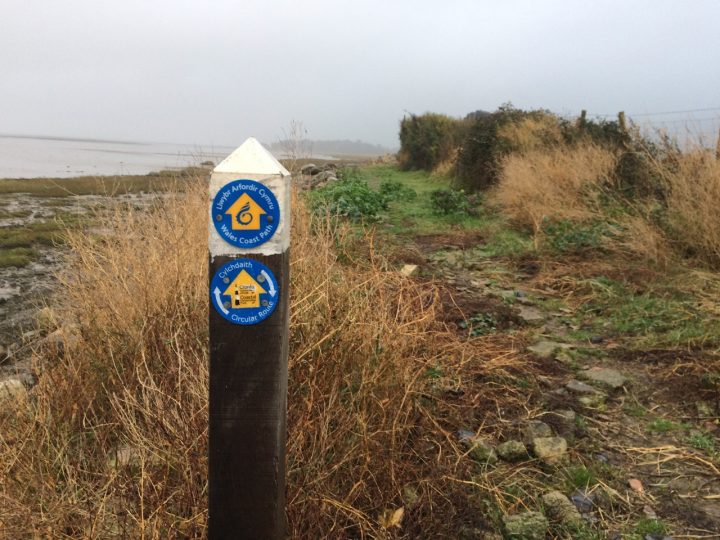 The going was flat as the path clung to the shoreline. As I approached Llanfairfechan it routed me around the marshy reserves of Morfa Madryn and Glan y Mor Elias and then emerged out onto the promenade of Llanfairfechan. There were very few people on the prom as it was still a very grey and very wet day. The Coast path then turned right and took me through the centre of the town before heading left along the main road through town and back towards the coast. Here I started following the A55. The landscape was suddenly dominated by transport. The busy railway line to one side, the busier road to the other and the huge dominating buttress of rock through which the Pen-y-Clip tunnels plunged. 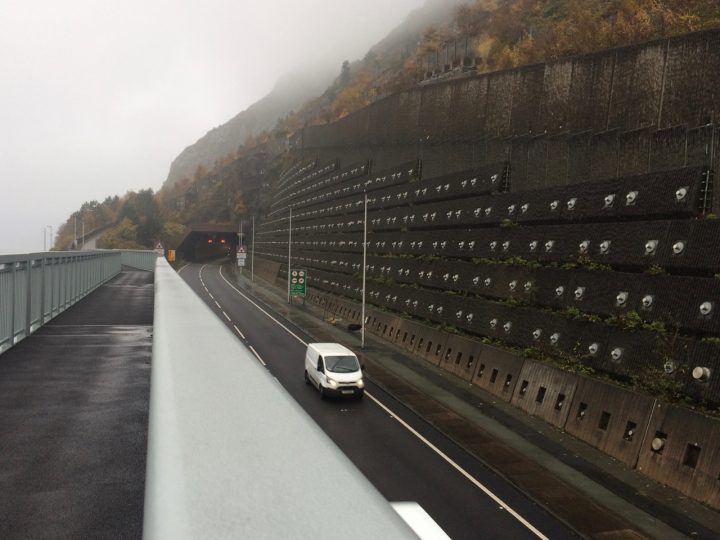 The tunnels opened up ahead of me swallowing the road and the cars upon them. My route took me up and over though, climbing up along the cyclepath and footpath and then descending once again towards the town of Penmaenmawr.

The path followed the road. I Crossed over it at times and at other times crossed underneath it as it made it’s way back down to the coast. The grey pillars and concrete jungle under the road were pretty dreary places. The path then ran between the busy A55 and the sea. To my left there were gently lapping waves, to my right speeding cars and trucks. The sea was grey, the skies were grey, the road was grey, everything was grey. It was still raining, visibility was low and there was very little to look at. My pace was slowing too as I continued to slog my way along what has to be one of the most uninspiring bits of Coast Path so far. Looking on the bright side, at least I was ticking off this section on a grey miserable day and wasn’t wasting a glorious sunny day on it. The views wouldn’t have been great whatever the weather.

There was at least some nice graffiti on a wall as I made my way along the prom of Penmaenmawr – the first bit of colour I’d seen all day.

Graffiti – Some colour at last

As I edged ever closer to Conwy the clouds began to lift a little out to sea and I could finally make out the silhouette of the Great Orme. This will be making up most of my route next time. 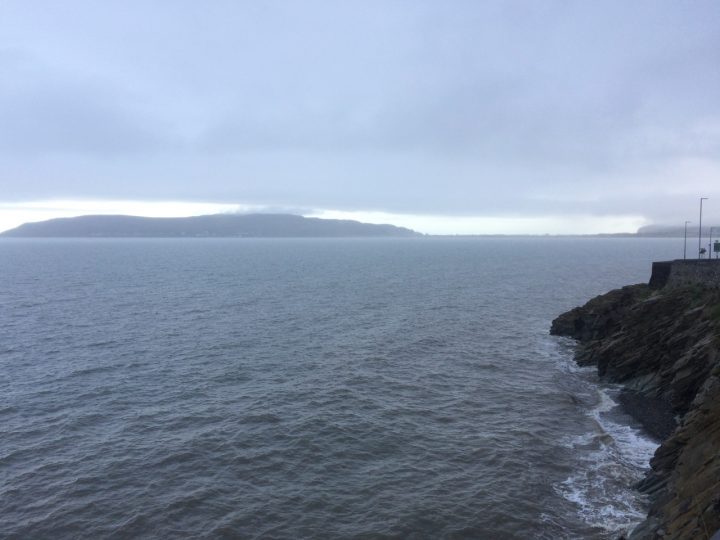 Conwy Bay and The Great Orme

There was still a long way to go though and it was comprised of endless miles following a tarmac cycle-path alongside the A55. Once again I was sandwiched between the rushing cars and the railway line as I made my way up towards yet more tunnels and around the point at Penmaen-Bach. Finally after miles of tarmac and seemingly endless streams of cars and lorries the path turned left onto some sand-dunes and I finally left the transport system behind. My legs were quite tired by now and the soft sand reduced me to walking now and then as I made my way around the edge of a Golf Course and then onto the banks of the Conwy Estuary. 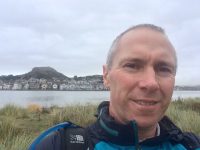 The path took me along the shores of the river around a Marina, through a housing estate that surounded the Marina and then into the outskirts of Conwy. 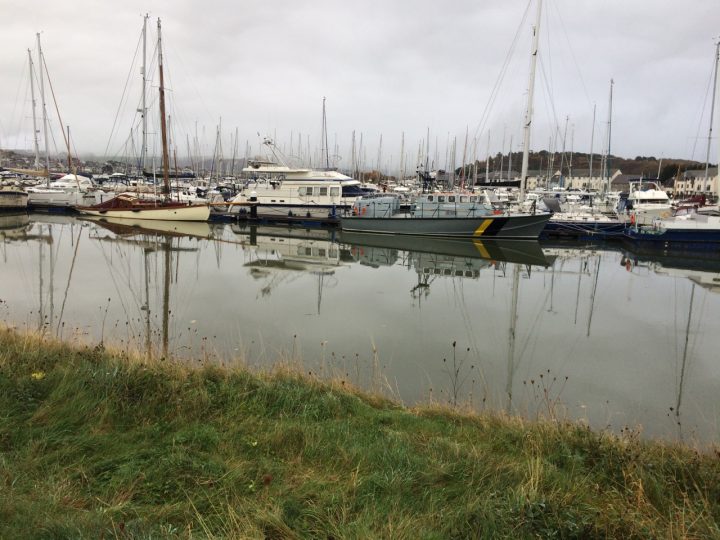 From here it took me back out to the river banks, around Bodlondeb Woods and along a pleasant river-side path towards Conwy. The castle could be seen ahead of me as I approached my destination for the day. 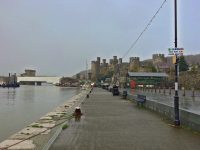 Once in Conwy I soon found the bus stop and had a short wait for the bus back to Bangor. I sat on the bus soaking wet and cold as it made it’s way back to Bangor. The bus was busy at times and I sat there soaking wet in my shorts as people got on and off. No one sat next to me though – I guess I looked like some bedraggled madman in skimpy shorts! The bus stopped in a number of places in town and then eventually deposited me at the hospital from where I had a freezing cold walk of a mile or so to my car. I got changed into some dry clothes, jumped into the car, put the heater on and made my way home. I stopped for diesel and then stopped again at McDonald’s for a ‘Mexican Stack’ burger meal and a coffee. The drive home was a relaxed affair through the rain once again.

Not the most exciting of Coast Path sections, but that’s another 22 miles ticked off on my quest to circumnavigate Wales. Next time it’ll be a run from Conwy, around the Great Orme, through Llandudno and on to Conwy Bay. 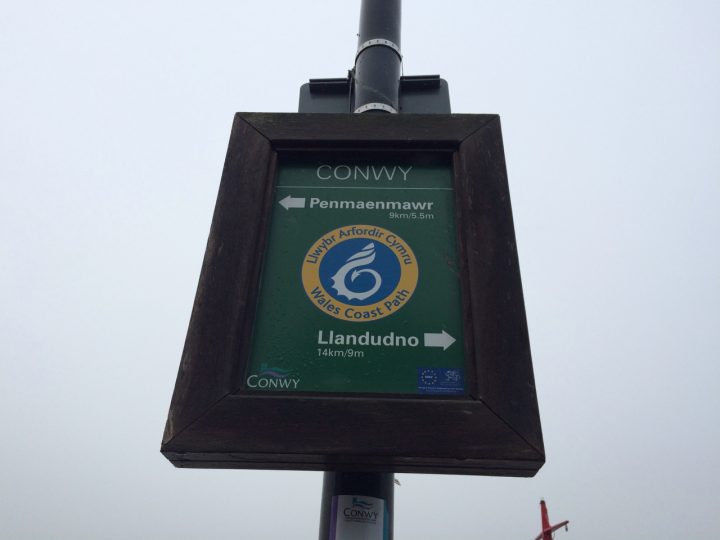