As it fell on Halloween this year, we left the pumpkins out on the deck to ward off the evil spirits before driving into Machynlleth.

We hadn’t planned to meet anyone there but knew that a few people were going and as usual we bumped into a whole load of people we know. As seems to be the case these days most of them are actually Morgan’s friends and of course their parents. It’s almost as if Morgan has more of a social life than we do and the children just take their parents along for the ride. We met up with Cameron, Eva, Jackie and Peter, Taniel,  his baby sister and Mum and Dad, Cameron Jamie, Mike and Rachel, Kerry-Anne, Sahara, Lotti, Emma and Armand and then also Dave, Sarah, Teresa and a few other people from Borth. It is becoming quite a social affair each year! 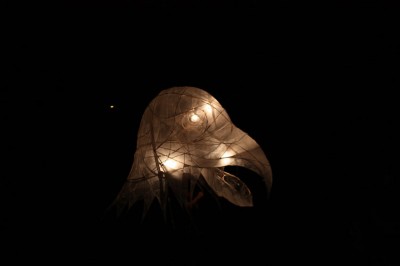 The lanterns were good, although we stood in the wrong place really. We had expected them to come up the road from the Clock Tower and then down through the park as they did last year. This meant that we were able to stand towards the clock tower end of Maengwyn and once the last lantern had passed, cut through the car park towards the field and see them coming back down through the park again. As it was, they went in the opposite direction this year. It didn’t matter though as we could still cut through and had plenty of chance to see them once we were in the field for the Festival of light. 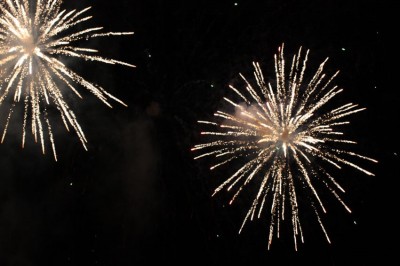 The fireworks were good too. The children all enjoyed them (except ‘big’ Cameron that is) and the adults had a good time. It seems to be getting bigger each year as far as attendance is concerned and the take-aways and pubs in Machynlleth seemed to be doing a roaring trade as we left. Entry to the Festival of Light was £3.50 for adults and £2.50 for children.

I did of course take some photos. It is fairly difficult to take photos hand-holding a camera in the dark but I simply put it on manual setting, made up a completely arbitrary exposure setting using a shutter speed and aperture that I wanted and it seemed to work. The camera was asking for much longer exposures and was continually telling me that everything wold be under-exposed but I ignored it and seemed to get it right. Some of the images suffer from motion-blur and camera shake but I think that actually adds to them in a way and captures the movement and life of the event. Hope you like them.