Our family holiday this year was a week on the Rame Peninsula. We were camping in Ramsey, our VW campervan after racing at the Pivot 24/12 MTB races near Plymouth and had no real plans for the week.

Typically after months of long hot summer with blue skies, hot still days, warm nights and no rain in sight, the weather broke as soon as we had our camp set up. The following night a major storm hit. It brought down trees, cancelled the MTB races and ripped our awning out of the ground. Our plans to stay at Newnham Park on Sunday after the race were scuppered and Anna had booked us into a Travel Lodge instead! The camper was now full to the brim with soaking wet, smelly, muddy and possibly broken camping kit. We ourselves were muddy, wet and smelly too. Instead of a chilled day watching everyone else leave Newnham Park we started the day with breakfast in McDonalds and then headed into Plymouth and the National Marine Aquarium which would at least be indoors and dry.

I definitely took at least one photo whilst in the aquarium but somehow it seems to have gone missing so you’ll have to imagine it for yourself. It’s quite impressive though with some huge tanks. Some with lots of British species in and another even larger shark tank. Pretty impressive stuff and a nice day out. We of course weren’t the only ones with the bright idea that it would be the perfect place to spend a wet and wild Sunday so it was quite busy in there. There probably weren’t quite as many tanks as we were expecting and of course it wasn’t cheap but it was nice to see. We’d seen everything and watched the fish enough by lunch-time though so headed off towards the Hoe. I have now found the photo though! 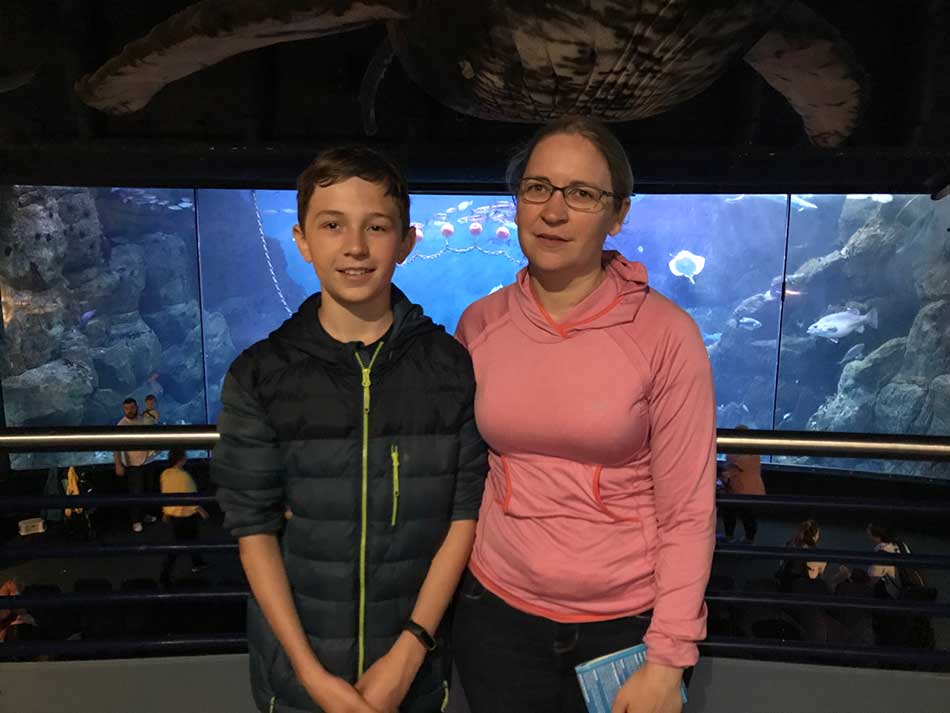 Lunch on the Hoe

It wasn’t the nicest of days for wandering along the Hoe and my foot was now killing me so I couldn’t walk far anyway. I did manage to hobble from the road down to a cafÃ© for lunch though. I know the weather wasn’t the best, but we were surprised at how deserted the Hoe was today. There was hardly anyone around. We chilled in the cafÃ© for a while, watching a large navy ship being escorted into the Sound by two tugs and a small pilot boat.

We then headed off towards Saltash and the Travel Lodge we had booked into where at last we could shower and feel human again. We didn’t feel like doing a huge amount so chilled in the room for a bit, got comfortable and planned where to go for dinner.

Our plans came to nothing though as we soon ended up on something of an adventure through the narrow Cornish lanes. Road closures and pub closures soon put our plans out of the window and we ended up in a nice little pub called the Weary Friar in the village of Pillaton where we had a delicious roast dinner. 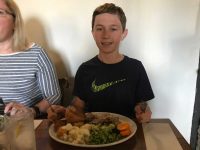 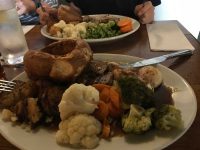 It was then back to the Travel Lodge for a nice comfy nights sleep in a large double bed – bliss!

Yep, that’s right, Monday, the first real day of our holiday was brought to you by the letter ‘P’.

My foot was getting worse and I could barely walk by now so it was decided that I should visit a podiatrist. Not quite what we’d be expecting to do on our holiday but I wasn’t very mobile and was in constant pain so it seemed sensible if not planned. A few phone calls were made and I soon had an appointment booked at the ‘Feet First Clinic’ in Plymouth for 3:30pm. We couldn’t book into our campsite until 2pm though so there wouldn’t be enough time to set up camp before the podiatrist visit. This meant that we had something of a non-day waiting for a podiatrist appointment.

We didn’t completely waste it of course. Breakfast consisted of pastries from the Greggs shop in the Travel Lodge. No almond croissants as I was hoping for though. Lunch was a picnic purchased at a nearby Lidl where I think we had a second pastry-powered breakfast too. We then headed across the Tamar Bridge again and back to the other side of Plymouth where we re-stocked our camping gear at a Go Outdoors. We needed gas for our stove and some new tent pegs as most of ours had been bent or thrown across the campsite when our awning made a bid for freedom during the storm on Saturday night! We did our usual messing around and getting a little over-excited whilst in a ‘super-store’ as well. Well, me and Morgan did, just to amuse and annoy Anna!

We then headed back to the Hoe for a picnic over-looking the Sound. We made the obligatory walk (hobble for me) to Smeaton’s Tower. I took a vertical pano photo of Morgan too which is always good for a laugh! 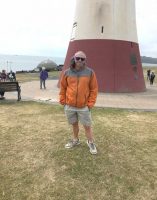 Looking out over Plymouth Sound 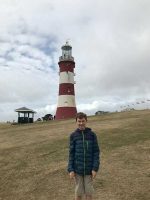 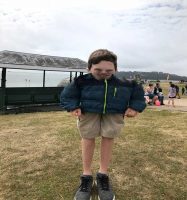 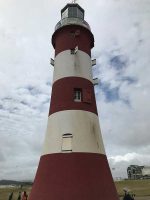 We then wandered along the seafront a bit and popped into Tinside Lido to find out the prices. Amazingly the Hoe was really quiet again today with barely anyone about and plenty of places to park all along the seafront.

It was slow going thanks to me limping along but I think Anna and Morgan were secretly happy about that. It meant that I had no outrageous plans for mad adventures and that I was going at a more sedate pace for a change. We watched another Navy Ship come into the Sound and then headed off to the podiatrist. 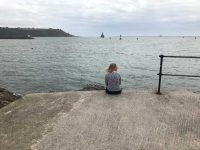 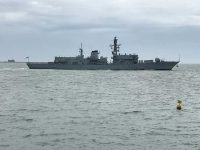 The podiatrist seemed to think that my corn was indeed a verruca (which is what we thought in the first place, only to be told by the GP that it was a corn). She also said that it was so inflamed that there was little she could do to help. The advice (as always) was to rest it, keep my weight off it and not to do 12 hour mountain bike races while it hurt! She didn’t actually say the latter but we could tell that she thought I was some sort of idiot for even thinking of doing such a thing that let alone already having actually done it!! She padded it so as to help me keep my weight off it and gave us some padding so that we could re-apply. She did say that I could go swimming if I wanted. 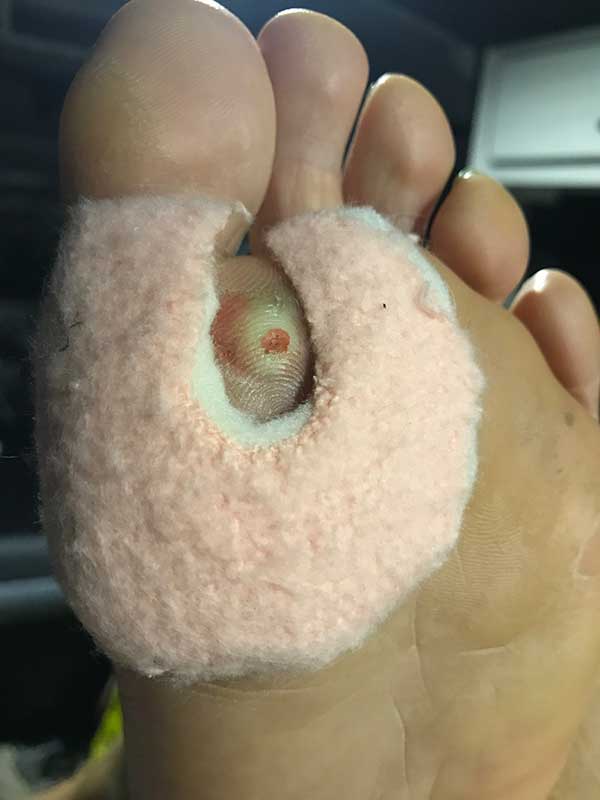 Things weren’t looking good. I had a holiday packed full of coast path runs, MTB adventures, Stand-up Paddle-boarding, walks along the coast, surf-skiing and playing on the beach planned. It looked now as though even walking around our campsite was going to be an issue.

We then made our way over to the Rame Peninsula via the Torpoint Ferry. We found the campsite at Whitsands Bay Fort and got set up. Our pitch was a little weird as it had no grass, just hard granite gravel over a rock solid surface. It took a while to get the awning fixed to the ground and we were glad we’d bought some new heavy duty tent pegs. The sun had come out by now and the awning was still in one piece so soon dried out in the sun. 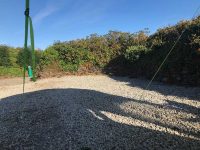 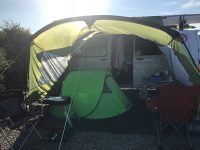 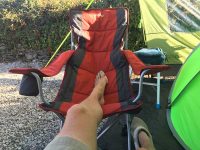 I was finally able to put my foot up and relax while Anna cooked pasta for dinner.