We’re getting used to this heatwave now. It’s once again 28.1ºC out there at the moment and it doesn’t even feel that hot now as we’ve seen temperatures up above 30ºC every day for the last week. Before that it was up into the mid to high 20’s for a while and we haven’t seen a drop of rain since June 20th. Mind you, when I say it like that it doesn’t seem that long, 12 days without rain, it feels much longer than that. I guess anything longer than a day or two without rain in Wales is slightly unusual. There’s not much let up in sight either with the forecast looking warm (mid 20’s) and dry for at least another week. I’m loving it!!

OK, the grass is brown, the water butts are running dry and we’re using bath water to keep the plants alive but there’s just so much fun to be had on the beach. The sea is lovely, the days are long and hot and the evenings gorgeous. So much so that we kind of lose track of what was post-work fun on weekdays and the weekend itself.

Playing in the Heatwave

We got plenty done this weekend though despite (or because of) the heatwave. I’m sure Morgan and I must have gone snorkelling after work on Friday as we were exploring the crystal clear water of the reefs everyday last week. I then headed off for a Cyclocross bike ride exploring some new trails in the hills not far from here, followed by a quick run in the blazing sun and 30ºC heat.

Saturday then started with a long 3½ hour MTB ride for me.

I was back at home not long after 9am though. Anna had headed off to Newcastle Emlyn with the Aberystwyth Silver Band. They were being filmed for a TV program and had to spend all day in the middle of a field with the sun blazing down playing to a herd of cows!

Morgan had a friend over so they’d played Xbox all morning while I got some chores done and did some work in the garden. Morgan also has a Saturday job now working in a local chip shop, so I dropped him off at the chip shop, dropped his friend off at home and then did some more chores. A couple of hours later I had to head back into Borth to collect him so I took the snorkelling kit with me and we had another lovely snorkel around the reefs. Morgan only got in for a quick dip but I went all the way around the reef where I saw lots of mullet, wrasse and plenty of other fish too.

After that there was time for a quick paddle on my surf ski and by best dolphin encounter so far. A big (probably male) came right up to me. I’d seen them surfacing a little way off not far out to sea, then I saw one heading straight for me. I could see it from quite a way off thanks to the clear water as this huge dark grey shape approached me at speed from my right hand side. I thought it was going to knock me off my boat but it swam right under me, came to a stop and then swam alongside on my left hand side, popping up about two feet away from me to take a look. It stayed there for a while, so close that I had to lift my paddles out of the water so as not to touch it. Then, it decided that I wasn’t that interesting after all and sped off. It did come back briefly but then disappeared off down the beach. All the while two other dolphins that looked like a mother and baby swam about 30m off to my right hand side. So Cool! 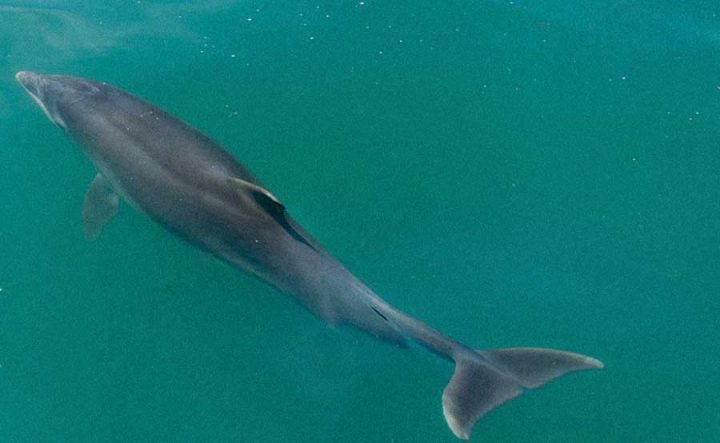 Sunday saw me heading an hour up the road to the Mawddach Marathon Surf Ski race in Barmouth. The race went pretty well, I had planned for it to be more of a recreational paddle but found myself mixing it up with the leaders at one point so had to push hard. The 30ºC heat and the headwind on the way back didn’t make things easy either.

I was back at home mid afternoon though and had planned to take Simon and his son (Morgan) snorkelling on the reefs. They hadn’t been before and typically just as we planned to go the northern edge of a band of thunderstorms rolled through. We had no rain or thunder but the skies clouded over, a SW breeze filled in and temperatures dropped by 10ºC. Normally 20ºC would feel warm but after getting used to 30ºC in this heatwave, it suddenly felt a little chilly on the beach in just a pair of speedos. We went in for a snorkel anyway but the wind had stirred things up and visibility was dramatically reduced. They still enjoyed it though and Simon can’t wait to go again.

The sun soon came back out though and I extended the weekend somewhat with an early morning sea swim on Monday morning and a Surf Ski paddle into Borth and back. It’s now 28.8ºC again as the heatwave continues, the sky is blue and it looks likely that we’ll hit 30ºC once again today. I’m sure I’ll be back in the sea again after work.