Another gorgeous day in Wales with temperatures up around 30ºC and glorious sunshine. Thankfully Barmouth is only an hours drive away so I wouldn’t be spending too much time on the road today. I set off early anyway as I’d prefer to be on the beach in the sunshine than driving in the van. I was soon in Barmouth ready for the Mawddach Marathon kayak race and I wasn’t the only one. With time to kill we chatted, headed off for a coffee and took in the atmosphere on the harbour-side.

We then got ready and had the entertainment of watching a van get stuck in the sand as the tide was rapidly rising. It was soon well and truly swamped. The coastguard Landrover, mountain rescue Landrover and another 4×4 from the harbourmaster tried individually and in unison to pull it out but to no avail. Eventually, as water lapped into the footwell three 4×4’s and a whole lot of man-power (including me and most of the people about to paddle in the race) managed to free it. I’m sure it’ll never be the same again but at least we got it out.

As with last years Mawddach Marathon, this race was part of the Mawddach Paddlesports festival. There were have a go SUP sessions, raft races, guided paddles, dragon-boat paddling, celtic sea rowing sessions and much more going on. The actual race is quite a small part of the whole event and not very well attended. There were however more people here today than last year and some fast people too. Richard who I had been chatting to already told me that Ben was likely to win as he was apparently a ‘bit good’, but David Hatton in his K1 kayak was supposed to be quite fast too.

It’s quite a relaxed laid back affair in some sense, but once the whistle blew there was no holding back. David, Ben and Stephen sped off, as did Richard. I always start a little slowly but as we left the boats of the harbour behind and headed towards Barmouth Bridge I was in 5th place. The others were behind me somewhere but obviously I couldn’t see where they were.

After paddling under the bridge I started to settle into a decent rhythm and started to catch Richard. It wasn’t long before I pulled up alongside of him and said hello. He commented on the fact that as he had predicted the three podium finishers were clear to see pulling away ahead of us. I picked up the pace a little and left Richard behind. I did think about trying to catch and get onto the wake of those ahead but by now they were a little out of reach. Instead I decided to concentrate on my own race and in trying to keep Richard (and the others) behind me.

It seemed to work as the three up ahead weren’t increasing their lead over me by much. By the time we got to the turn around buoy at Penmaenpool, the three of them were still in a tight bunch working together with about a 200m lead over me. Richard was another few hundred metres behind me.

As we left the confines of the river behind us and started heading back towards the coast I decided to put in a bit of an effort. I was clawing my way back up to the three ahead of me which only made me paddle harder. Before long I had caught them and overtook them a little way off to their left. I moved into 1st place on the water and they started to panic a little. They scrambled like mad to catch me and get on my wake. David and Ben managed to do so but the effort dropped Stephen. So, now there was still a little group of three in the lead but this time it had be out in front. David and Ben sat on my wake for a while but as we headed further towards the coast we hit something of a headwind and I paid for my earlier effort to overtake them.

It doesn’t help that I paddle with zero feather on my paddles either as this means they really catch the wind when paddling into a headwind. That’s just an excuse though as David and Ben soon dropped me as I was beginning to tire. There was still quite a long way to go and eventually, Stephen Caught me back up and overtook me too. By the time we headed back under Barmouth Bridge, the tide was once again in our favour and I was back into 4th place, back where I belong. That’s how it finished. David won, Ben 2nd, Stephen 3rd, me 4th and Richard a little way back in 5th. I’m not sure of the position of the others but everyone finished what turned out to be a hard couple of hours of paddling.

I was pretty pleased with my performance, especially having mixed it up with the leaders for a while. Two people did comment on the fact that they don’t know how I make the boat go so fast with such bad technique. Kind of a compliment in one respect but also some advice that I really need some coaching and really need to develop a proper paddling technique rather than relying on stubbornness, fitness and pure effort. I imagine I could get quite good with some actual finesse rather than just fitness.

We stood around in the sunshine, trying out each others boats, talking surf ski and then watched the presentations. 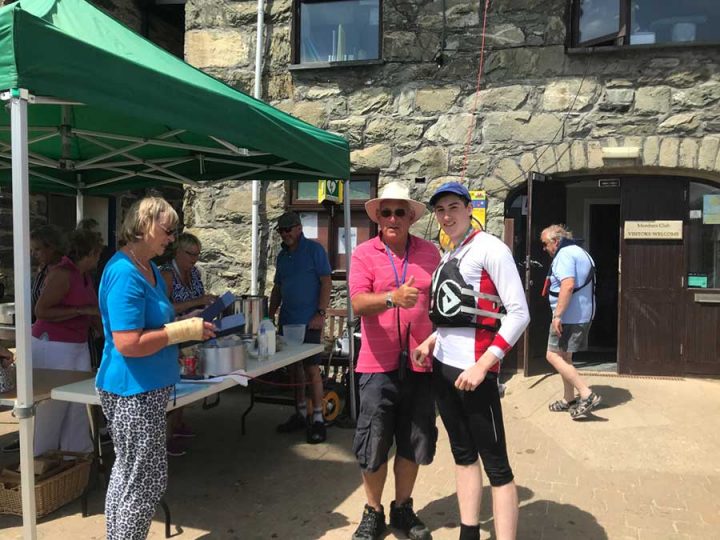 I didn’t hang around long after that but instead joined the holiday-maker traffic back to Borth so that I could head out for a snorkel on the reefs. Another good day out and a good race at the Mawddach Marathon too.