Thalassotherapy – Oh I do Like to be Beside the Seaside

Oh I do Like to be Beside the Seaside

I guess that’s no secret, I not only like ‘being beside the seaside’ but being in the sea itself too. There’s just something about it, and not only for water-sports lovers such as myself. Take Anna, she barely ever gets in or on the sea but she still loves living next to it and couldn’t really bare to be away from it for too long. As ‘scientists’ we don’t really go for the ‘hippy, spiritual, positive vibes’ kind of thing but there is something to it and being by the sea or even better in the sea is just good for you.

How’s that for a word? Thalassotherapy (from the Greek word thalassa, meaning “sea”) is the use of seawater as a form of therapy. Apparently it’s a term coined way back sometime around 400BC by Hippocrates who is often known as the father of medicine. If the Father of medicine was onto the health benefits of the sea then who am I to argue with him. Proximity to the ocean can have a positive impact on your health: the closer you are to the sea, the better you feel. We may not know the exact mechanisms behind this, but doctors have been prescribing curative trips to the shore from as early as the 18th century, and recent studies suggest that the link between the ocean and health is a scientific fact.

And that’s just the beginning there are loads of health benefits to being near the sea.

Maybe I should start thinking of my sports sessions in the sea as therapy.

The last of the wind for a while was blowing yesterday. A strong Northerly with glorious blue skies and sunshine. It was pretty chilly in the wind and I was at work all day so was dying to get out. It was still blowing when I got home but was forecast to ease off so I rushed over to the beach.

I rigged my 5.7m sail to start with and my largest (104ltr) board. I got going OK but was a little under-powered so I rushed back in and changed up to my 6.7m. That may have been a mistake, maybe I should have been more patient. The 6.7m was way too much as I think the wind had filled in again. I was now overpowered the whole time and barely in control. Keeping the board on the water was quite a challenge and once in the air I was completely out of control. It was good fun hanging on for the ride though and hoping for the best. 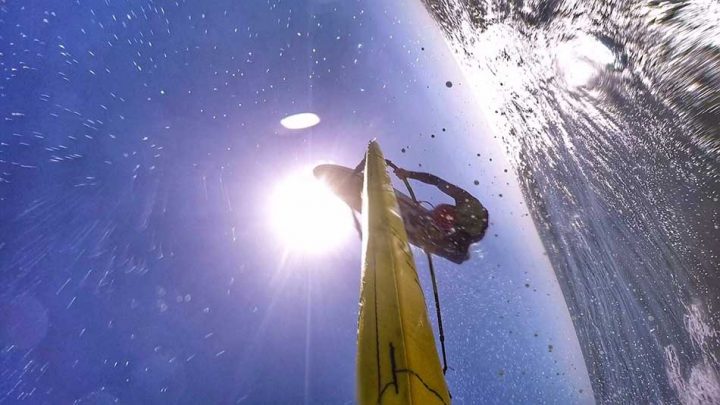 Jumping into the sun

It did of course result in a few big crashes and probably a few bumps, bruises and strains too but it was all good fun. I don’t quite know if it could be classed as thalassotherapy as it felt more like being beaten up in a wrestling match at times, but I’m sure the adrenaline rush was good for me.

The wind eased off overnight and I was soon back into much calmer waters for a 6:30am swim with the Aberystwyth Aquanuts. This was much more like therapy. There was still a little bit of swell out there and the clear skies overnight had the air temperature down into low single figures. The sea was lovely and the conditions were perfect for an easy, relaxing open water swim. It was a little murky thanks to the recent rougher conditions but warming up nicely. I do sometimes wonder what it would be like to live somewhere where the sea was always warm, I’m sure it would have its benefits. That said, the invigorating nature of the UK seas has it’s benefits too. There is no better way to activate your body and start the day than an energising dip in the sea.

We swam from Consti to South beach today. At the end of the swim were joined by a couple of dolphins off south beach who put on a show for us. The younger dolphin of the pair was jumping and chasing fish and looked to be generally having a ‘whale’ of a time. The sun was shining, the day was still young and we’d already had a good chat, a good swim and watched the dolphins at play. Topped of with chocolate twists, croissants and coffee all before work… No matter what the 9-5 throws at us we’ll be up for it.