Springtime in the Garden

Nothing much to report from the weekend really, except for the fact that the thick sea fog that we had to contend with on Friday did clear on Saturday to leave a glorious day. Perfect for a surf ski paddle and then a Gravel Bike ride in the hills. The enforced rest of the previous week thanks to an inflamed achilles tendon seemed to have done me the world of good though with some decent times on several segments of the ride, including the huge ‘Leg Burner’s Big Brother’ climb.

Time in the Garden

It was then time to mow the lawn and continue getting on top of the garden. This continued on Sunday – after another surf ski session and a sea swim. The weather wasn’t so good until I’d finished in the garden and started cooking dinner but I managed to get plenty done under grey skies anyway. Weeding, mulching, trimming and tidying. I’ve nearly removed enough compost to dismantle the old compost bins. I’ll then have to build some new ones. I also planted out a few cuttings that I took last year and checked up on a few old friends that are beginning to show their faces for Spring.

Things are now under control and looking good out there. With a  the nice layer of mulch I’ve given them and the sprinlking blood fish and bone they should start to grow like crazy. 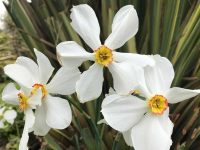 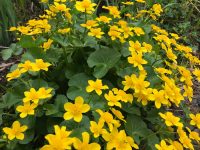 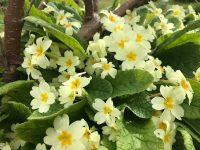 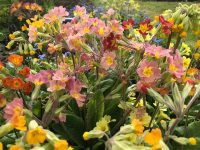 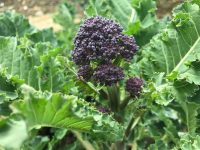 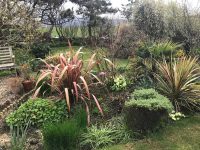 Next it was time to cook up a delicious curry for dinner. We didn’t use any ingredients from the garden for this, but we have been eating the purple sprouting broccoli from the garden and I’ve just made a rhubarb and ginger tart using rhubarb from the garden too

With dinner ready it was finally time to sit down to eat it whilst watching Pearl harbour on TV. The ambience of the film was added to somewhat when the bomb disposal team detonated a bomb on the beach opposite our house. This is a fairly common occurrence but it shakes the house and always makes us jump. It did enhance the special effects of the explosions on the TV though. The second bomb a few minutes later made us jump too.

Our new cats Cosmo and Luna have now been allowed out too. We’ve kept them in until now so that they feel at home here. We also waited until most of the work on the drains was completed. We then opened up the cat flap and let them out.

Parkin, the ginger cat that seems to have adopted us came straight in and ate all the food. Luna went out and never came back again. Cosmo went out and then came back for one night. She then went out and she too disappeared for 36 hours or so.

Eventually and thankfully after a couple days once the weather turned wet they did both come back. They now seem to have settled into accepting this as their home and coming and going as they please. It is now a little difficult to feed them before Parkin hoovers it all up though and I think they’ll spend more time outside than in once the weather is better. Cosmo is at least a little friendly now and lets us stroke her – but only really when there are treats on offer. Luna is much more adventurous but still doesn’t let us near her.

One day, just one day we might have normal pet cats!