My home for the night was a quiet road in Windermere, along with a few other camper vans. I soon settled down to sleep in the van after a busy day in The Lakes.

The following morning I was up early and in search of a toilet. Despite the fact that there were loads of public toilets in Windermere and that they cost 40p none of them were open. In the end I had to hang on as long as I could and finally popped into Costa Coffee to use their toilet when it opened at 8am. I felt obliged to buy a coffee while I was there and then headed back to the van to drink it along with a couple of eccles cakes for breakfast.

Lake Windermere was looking lovely in the early morning peace. 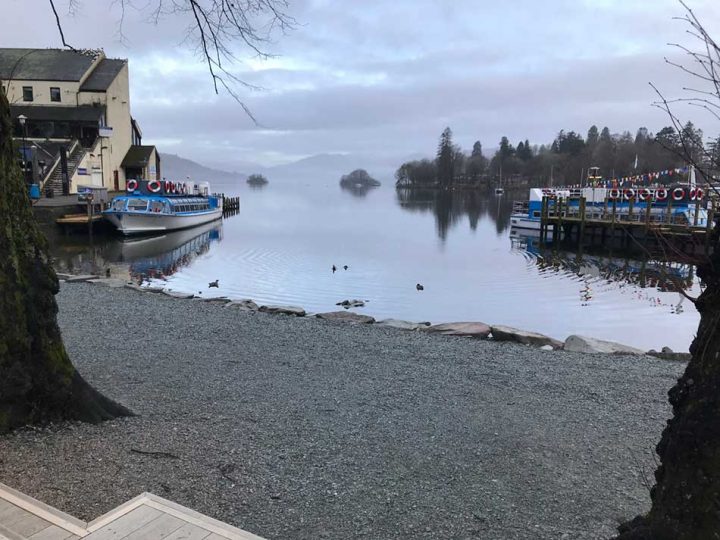 Alan soon arrived and parked next to me so we chatted for a while waiting for the others to arrive. Once again he had the lovely looking Revo Ski’s with him. 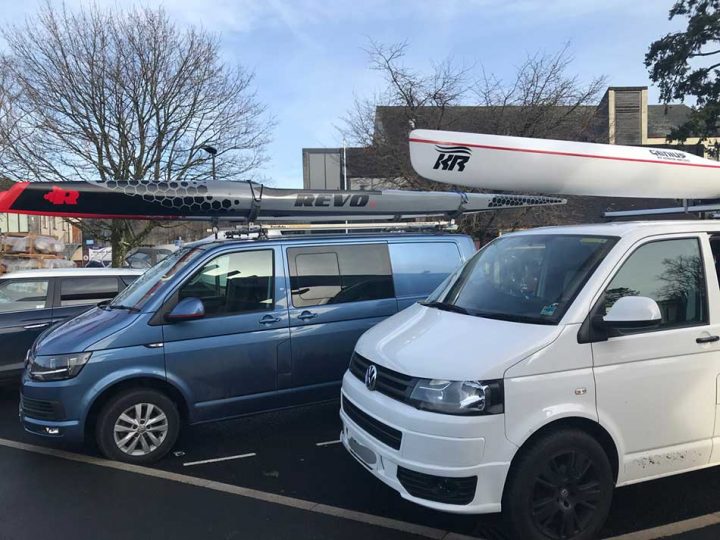 I think they do 4 different Surf Skis. The beginners stable R4. A beginner / intermediate R3 which he had with him in black and grey. 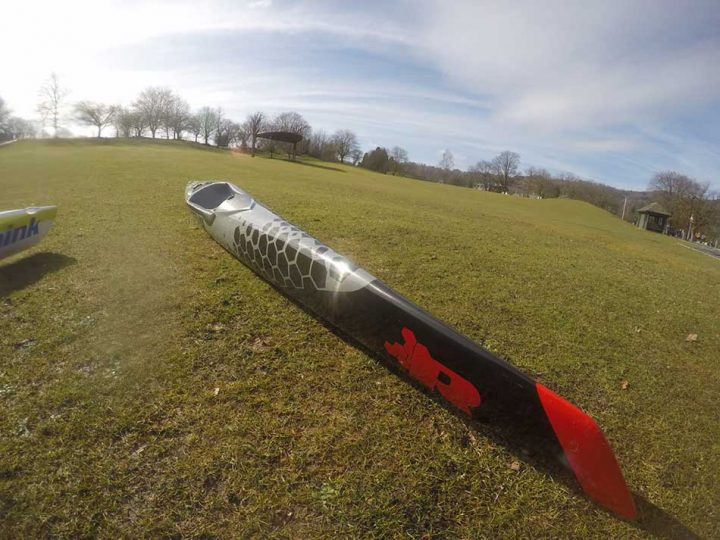 He also had the more advanced, less stable R2 in black red and silver. As I was getting my surf ski off the roof I suddenly decided that I should try out the R2. I wasn’t sure if I was quite up to a more advanced ski but it was worth a go. Windermere was looking calm so what was the worst that could happen!

There were 5 of us paddling today, I was in the Revo R2, Mark took the R3, Alan was in Marks Knysna CLK, Stuart was in his Epic and Dave who had organised the weekend was in his Think. A good selection of boats on the water as we set off following in the wake a little hire boat. 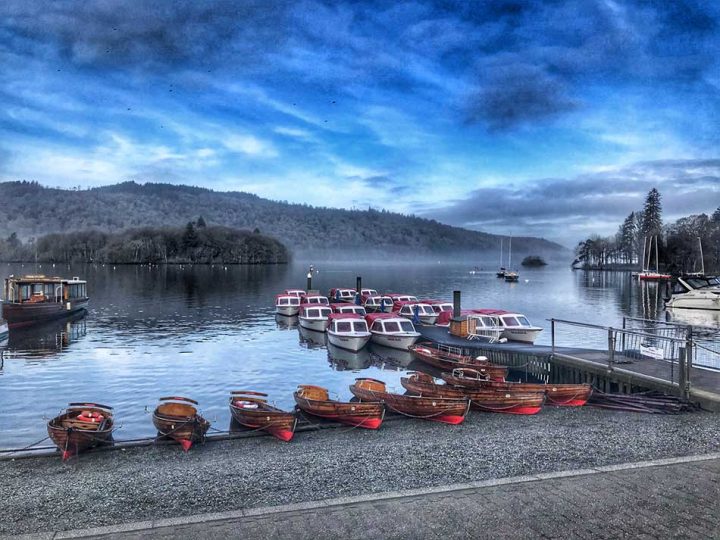 The Revo R2 felt lovely. It wasn’t much more unstable than my Knysna Blu if at all and I soon felt at home in it. The bucket seat seemed to fit me a bit better and felt more snug than my boat which possibly gave me more control. It felt pretty responsive too. The colours are lovely and it’s certainly a nice looking boat both on land and on the water. 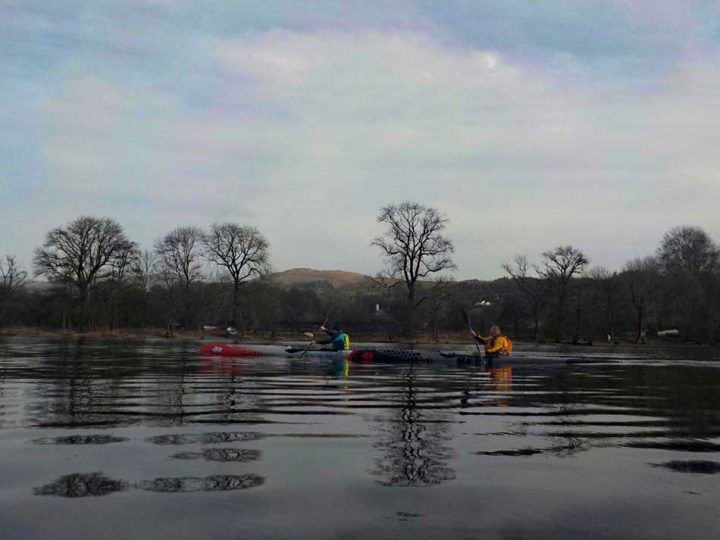 We left the couple in the boat that we’d been following alone after a while and continued on our way up the lake. It was now a glorious day with the sun shining and sparkling off the calm waters of Lake Windermere. Sailing boats were out as were other groups of kayakers and the occasional ferry or pleasure cruiser motored about on the water. We turned around and headed back into the sunshine. Spring had sprung for a while here in the Lake District. 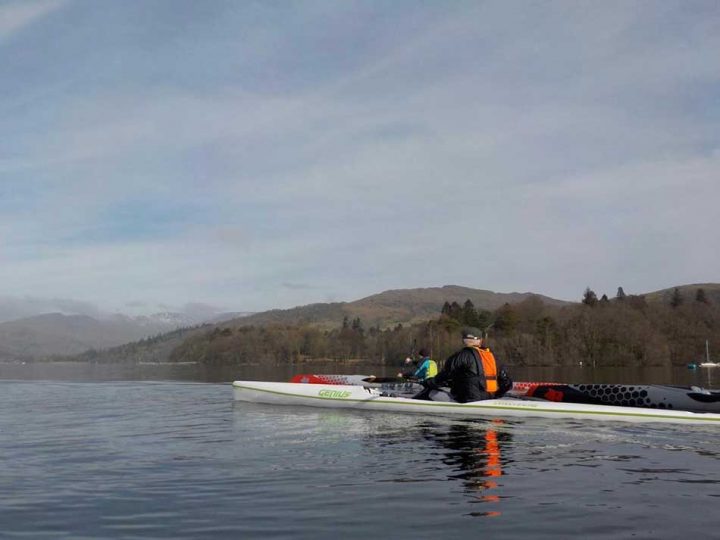 I put in a bit of an effort on the way back and got the ski up to speed. It felt good! I don’t think I can afford another boat just yet though!

I’m not really expert enough to review it fully but it was good to get a whole session padding in it. Usually, after an hour or so in my Knysna BLU I’m beginning to get quite uncomfortable in my sit bones and piriformis. It’s hard to say if the Revo R2 was better in this regard but I did still feel quite comfortable after 90 minutes on the water.

It also makes the Knysna feel a little cheap and cheerful. That’s not necessarily a bad thing as the Knysna is indeed half the price of the Revo but comparing the two side by side you can see why. The Revo has a much better finish and more attention to detail as far as fixtures and fittings are concerned. Not to mention the stunning graphics.It also feels more robust and likely to stand up to a little more abuse. Yes, I’d love one, and were I in the market for a new ski then I’d certainly spend the extra money to get a better boat this time. I’d try a few others first of course but the Revo would be up there on my list. I couldn’t fault it on or off the water, but I couldn’t justify spending quite that much money on another Surf Ski at the moment. It might be better, but the Knysna BLU is still giving me plenty of enjoyment, gets me out on the water and is still a good boat that does what I need it to. It was good value for money too and I’m making the most of it. It was nice of Alan to let me have a proper demo in the Revo R2 though especially as he knew I wasn’t in the market for buying one. You can’t really get the feel for a boat in a 5 minute paddle but after 90 minutes in it I didn’t want to get out.

Back on land, Windermere was now alive and bustling with people.

We packed up, others had a go in the R2 and I got changed ready to head home. Just a small matter of a 4 hour drive back to Wales. It was worth it though as it had been a good weekend packed full of surf skiing, mountain biking, running, camping in the camper and some lovely Lakeland scenery. Everyone enjoyed themselves and I think we’re all looking forward to something similar again soon.