Well, just after getting settled in the van it started raining. The constant hammering on the roof kept me awake all night. Oh well, not much I can do about that. I was therefore up early, had a pot porridge and coffee and set off towards Ullswater. My route took me up an aptly named road called The Struggle and the up over Kirkstone Pass and back down the other side. Kirkstone Pass, at 1,489 feet, is the Lake Districts highest pass open to traffic and can have some amazing views. It was however still raining and the clouds hung low over the hills. With big snow drifts along the side of the road and the pouring rain there was little to see and no chance of taking my eye off the road to see it either. 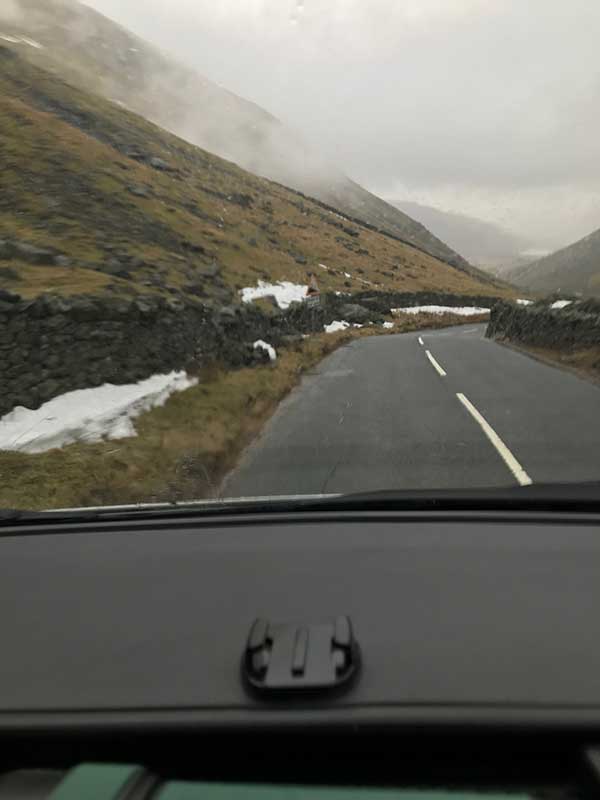 I found the designated parking spot at Stybarrow Crag, parked up, had another coffee and chilled waiting for the others to turn up. I was first there as usual! 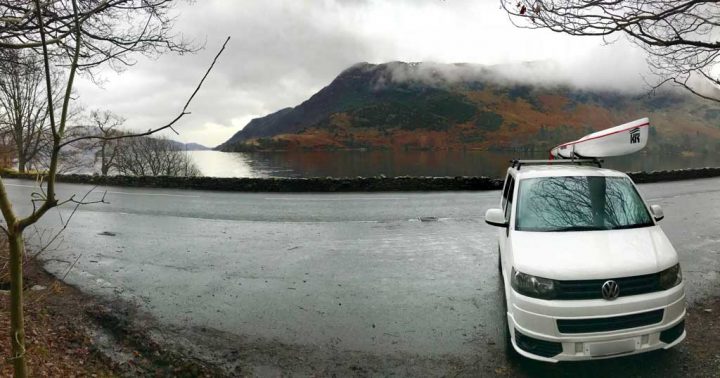 By 10:30am not only had about 10 people headed off in canoes but 9 of us had congregated ready for a surf ski paddle on Ullswater. It was good to see so many there and good to see the selection of skis too. 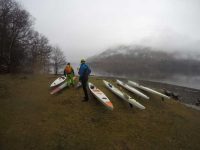 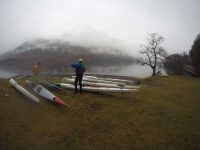 Alan had brought a couple of lovely looking Revo skis song for people to try. They certainly turn heads on the beach with their distinctive graphics. Ullswater was looking lovely with barely a breath of wind and surrounded by dramatic looking Lake District scenery.

We soon set off en masse first heading south to an island at the bottom of the lake and then we paddled the full length of Ullswater to Pooley Bridge. 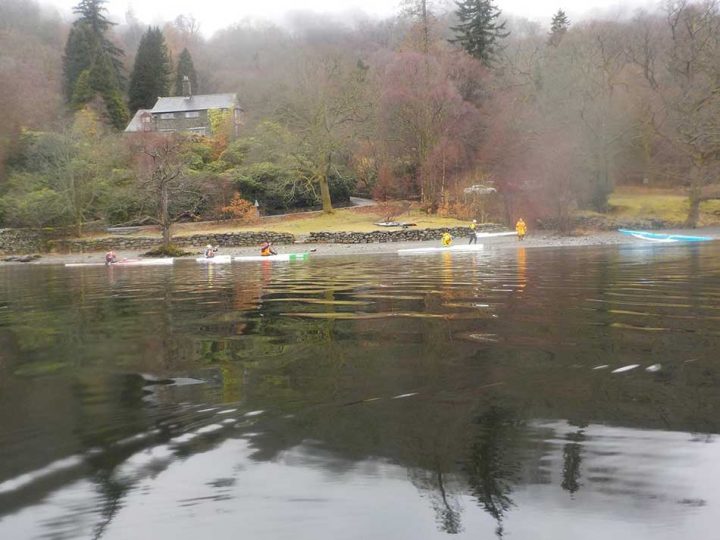 There was barely a breeze as we glided along over the silky smooth water. Clouds shrouded the hilltops which were still clothed in the white of snow. The hillsides surrounding us were coloured orange, browns and green with the occasional splash of a more garish colour just visible as waterproof clad people walked along the lakeside. 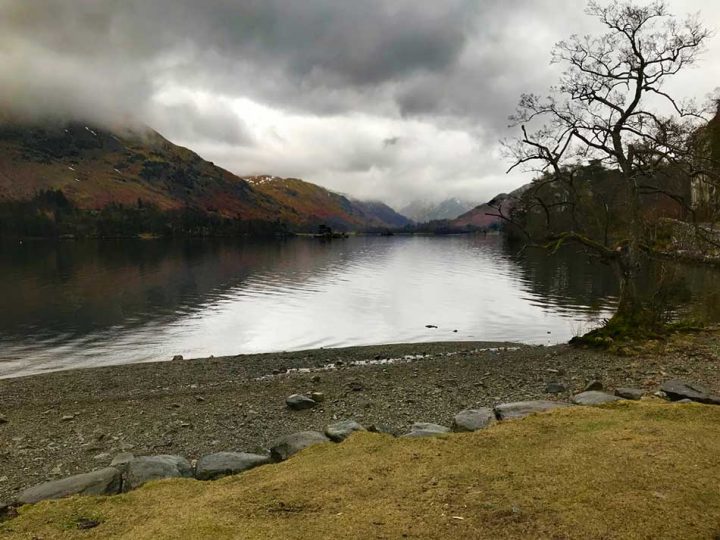 Swans, ducks and a large flock of cormorants scattered as we approached. Other than that the only sound was the steady splosh and swoosh of paddle strokes and the occasional quiet chatter.

The five of us who arrived first paused briefly at Pooley Bridge before turning around for the 7 mile paddle back. 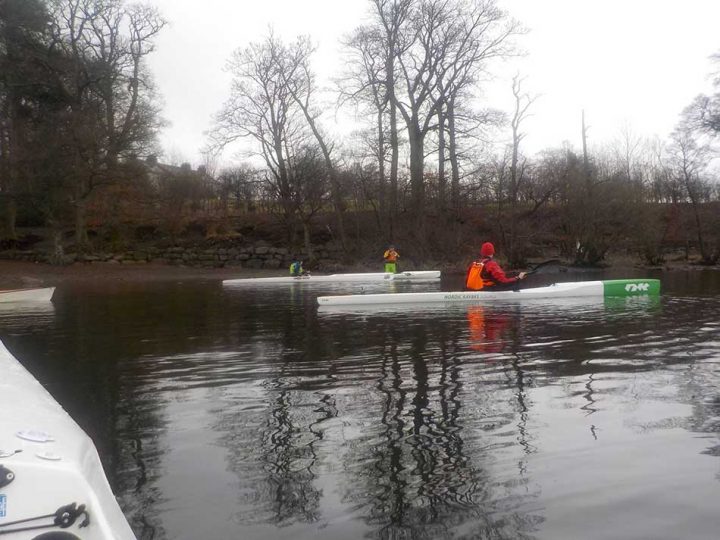 We rejoined with the others on the way back then pushed on a little harder towards the end. Now the sound of paddle strokes was accompanied by some heavier breathing as the work rate increased.

Back at Stybarrow Crag, we packed up, chatted and got changed.

The others then headed off for coffee and cake. I meanwhile had a quick lift to Pooley Bridge from Alan and then set off to run along its eastern shores. It was as now raining heavily as started running at a slow but steady pace. The first couple of miles were along tarmac roads – well they were once I found the right road. The first mile or so was actually spent running around muddy fields going the wrong way!

Once on track and having already run a mile or so I started my Garmin and plodded on into the rain and gloom.The road soon gave way to track. Track gave way to trail and soon I was on a very rocky, rooty path. The going was tough, the rocks and roots were slippery and there were lots of short climbs and descents as the path hugged the shoreline of Ullswater.

Looking back to Pooley Bridge

A mountain biker overtook me at one point, effortlessly bouncing his way down the steep rocky path. I’m not sure I would have made such slick, rugged descents look quite so easy. I did re-catch him several times along the way though as he slowed for the tricky climbs. I stopped to chat briefly at one point before we carried on our way. 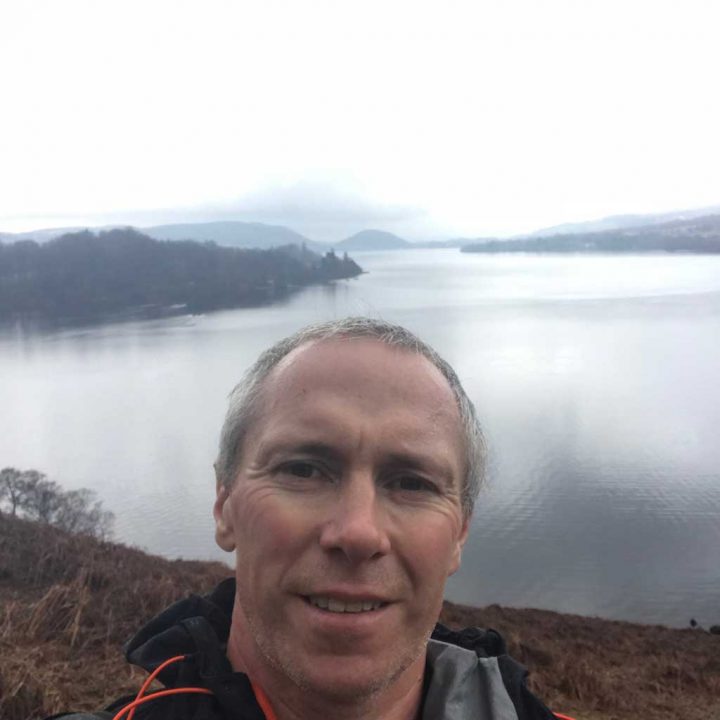 Eventually, with the rain getting ever heavier and 10 miles after starting my watch I made it to Patterdale at the southern end of the lake. I ran from a here into Glenridding where I spotted the guys I’d surf skied with earlier. They were still in a cafÃ© warm and refreshed. I continued on, soaking wet and looking forward to a hot drink. I followed the Ullswater way for a couple of miles back to Stybarrow Crag where the van awaited.

Wet and tired I decided the best way to clean off the mud and sweat was a quick dip in the lake. I undressed in the van, put my swimming shorts on along with a toweling robe and headed over to the water.

I didn’t hang about for long in there, just a quick dip, a quick dunking and some splashing around to rinse myself off before running back out and into the relative warmth of the van.

Once dressed and re-warmed I headed off into thick mist and very low visibility over Kirkstone Pass once more. This time the warning lights at the bottom were on warning if â€˜winter conditions’ on the pass. It was pretty low vis up over the top and very wet elsewhere.

I made my way into Windermere, let Anna know I was still alive and found somewhere to park up. I then had a phone call from Dave telling where they were having dinner so set off on a 2 mile walk through the bustling streets of Windermere towards the Lamplighters restaurant.

I didn’t realise Windermere was quite so big, but to a village idiot like me it felt like a big bustling city with people everywhere. The place is packed full of upmarket pubs and restaurants and all seemed to be doing a good trade even though it was out of season in early March.

Dinner was nice and it was accompanied with a good chat too, and a beer of course. The burger was good, but the venison looked pretty good too. We then went our separate ways. Mine was a 2 mile walk back through Windermere with a stop in a shop for a packet of Eccles cakes. These were eaten on the way back to the van followed by hot chocolate and a while packet of triple chocolate cookies. Mmm mmm. I think I’d earned them today though.