A Tasting Menu at Ynyshir Hall

Note: We have been back again and things have changed a little. The food is just as delicious though so click here to read about our latest visit to Ynyshir Hall as well.

We had an exciting day out on Saturday. Lunch with the tasting menu at Ynyshir Hall.

That’s the motto of Gareth Ward and his Michelin starred restaurant at Ynyshir Hall. Not our usual Saturday lunch admittedly and quite out of our price range usually, but this was my birthday present from Anna so I’m obviously worth it!

It was a pretty grey miserable day but we were greeting by a smoking fire-pit on the drive and deep sheepskin rugs everywhere as we entered the cosy confines of Ynyshir Hall. The mature grounds looked nice, but today wasn’t a day for wandering around them. The sheepskin rugs, warm bar and glass of chocolate vanilla stout were much more inviting. 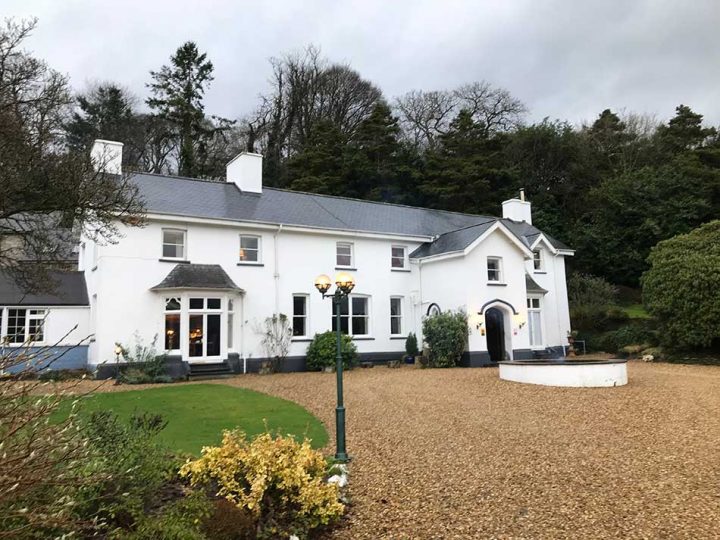 Having never been before we were of course a little apprehensive as to what we’d find but we were soon made welcome, our coats were taken and we sat in the bar area as drinks were brought out. We were the only ones there so far and I should point out that morgan was at home. This was a romantic meal for the two of us. Hopefully it would be an exciting, taste-bud tingling experience. For Morgan it would have been more like a bushtucker trial as he’s not at all adventurous with his food! We were presented with today’s menu which didn’t give a huge amount away, and wasn’t quite what we got either. 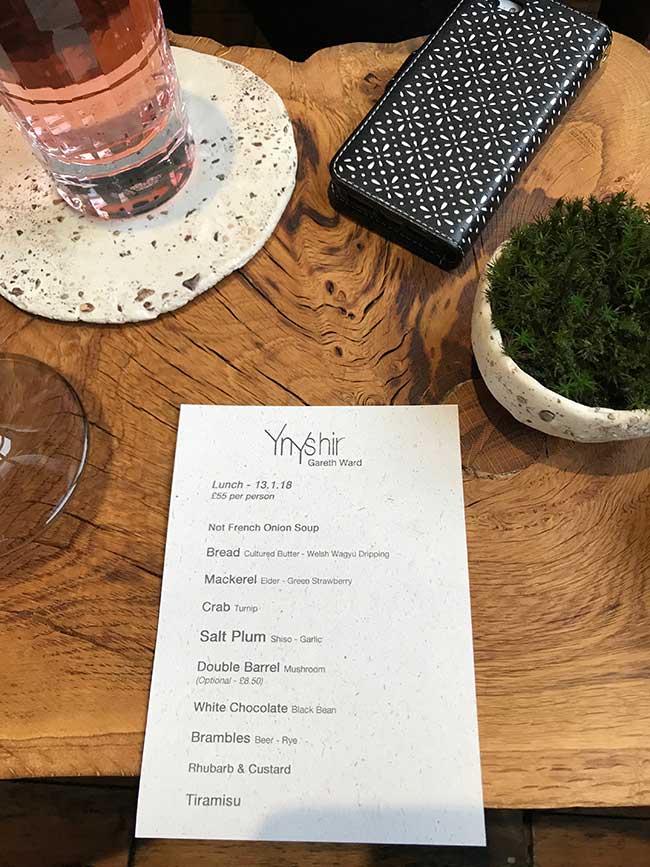 We relaxed in the bar sat at the window looking out over the hills of West Wales. The brown bracken and green grass glowing against the dark slate grey rocks despite the rain.

We were soon moved into the restaurant which was set out with large tables. Plenty of room but still quite intimate. The kitchen is open to the restaurant area as well so we could see everything that was going on. The decor was minimalist and rustic with big slabs of oak perched on simple welded metal legs as tables. As well as the tables where we were sat there is also a ‘Chef’s shared table’ which looks down onto the kitchen and a ‘Pass Bench’ which is situated right in the kitchen itself.

“decided to serve set menus making the best of our seasonal ingredients – our philosophy is translated into every small dish taking you on a journey of flavours, textures and ingredients.”

We started that journey with what seems to be one of the chefs signature dishes, ‘Not French Onion Soup’. The kitchen staff bring the dish out to you, all served in what looked like locally made rustic crockery. They tend to assemble the last few parts of the dish at your table and talk you through what you are about to taste. I won’t be able to remember the exact constituents of each dish but the Not French Onion Soup was a flavour sensation brought alive with fresh ‘coastal salad’ gathered from the Dovey Estuary. There was onion puree, pickled shallots, tofu and miso all brought together in a very oriental tasting starter. What a way to start! 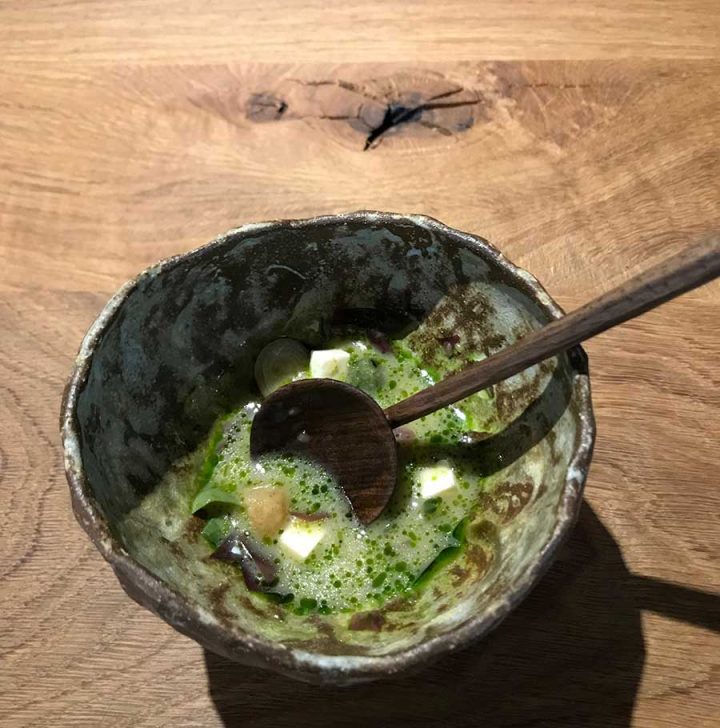 The portions were of course small, as is expected of Michelin quality dining but the flavours were big. There were also eleven courses in total so the whole dining experience takes a couple of hours.

Next out was Aylesbury Duck from Fishguard which was Anna’s favourite of the whole day. Delivered complete with a pair of forceps to eat it with! 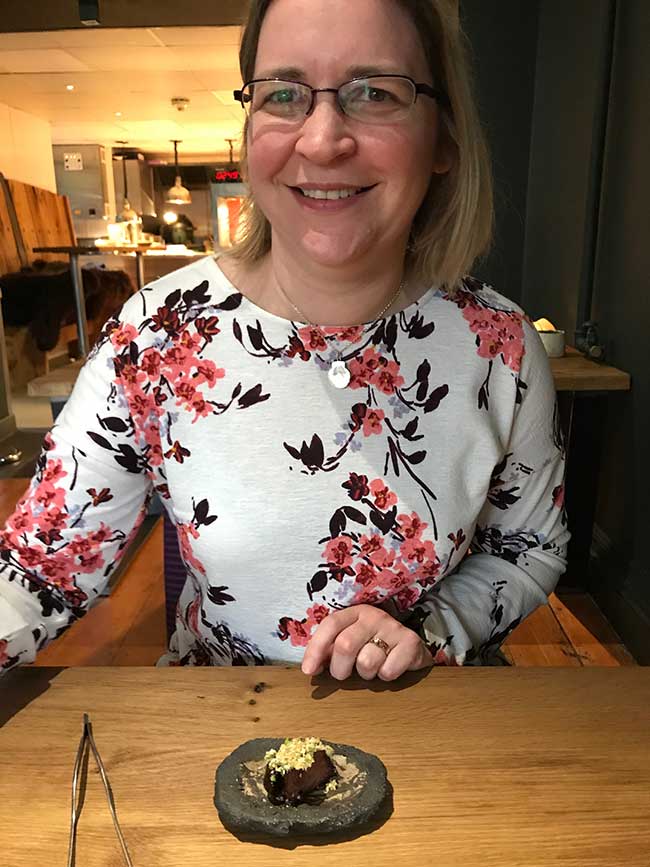 Anna and the Aylesbury Duck

It was indeed tasty. We soon started to lose track of what was next, but we had sourdough bread with cultured butter and Welsh Wagyu Dripping. This was particularly interesting as it looked like it should be creamy but tasted strongly of the wagyu beef. Delicious and the black crusty bread was perfect with it.

We had Mackerel with Rhubarb and Backfat. We aren’t usually very fishy and Anna wasn’t sure about this, but the flavours were certainly full on and the super sweet rhubarb balanced the strong mackerel well as far as I was concerned. 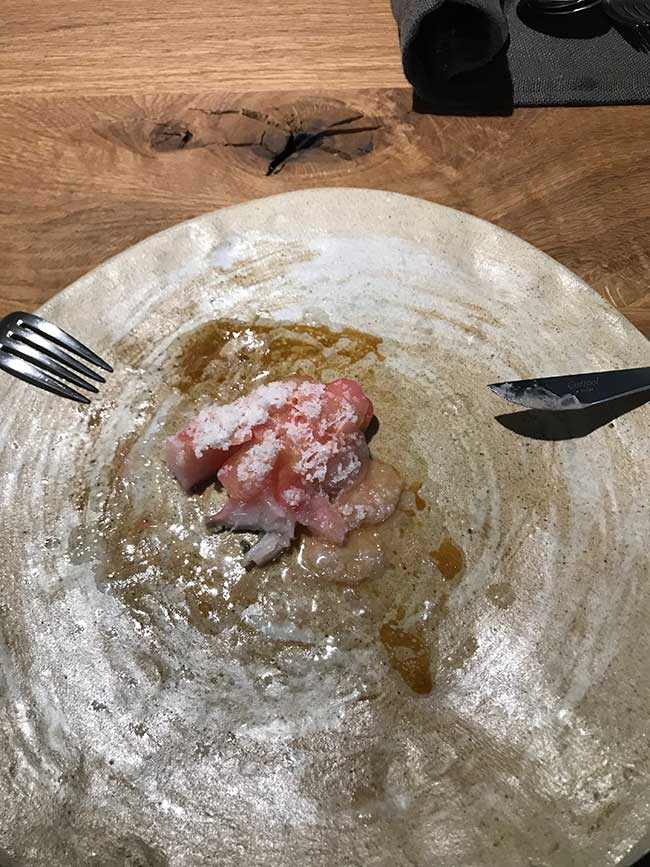 Some more of the duck next, this time some duck breast topped with a fruity glaze and that all important salty, oriental drizzle. Delicious yet again. 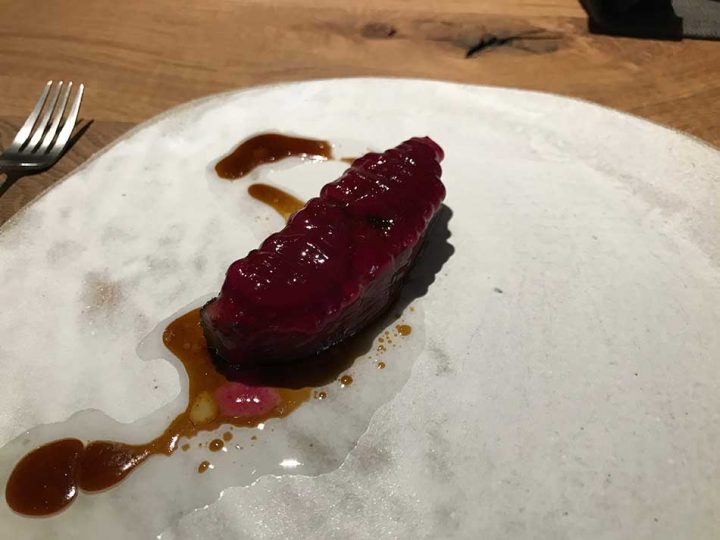 Crab with turnip was good too. The crab melted in your mouth, the turnip provided some crunch and the rest brought it all together in yet another taste sensation.

We then had a choice of an optional cheese course that we decided to go with. Double Barrel cheese toasty with mushroom. Not any old cheese toasty though. Nope, as you can imagine this one had flavours that hit the roof.

We were then onto the sweets. White chocolate with Black Bean. Unusual to have beans as a dessert as far as I’m concerned, but it certainly worked. 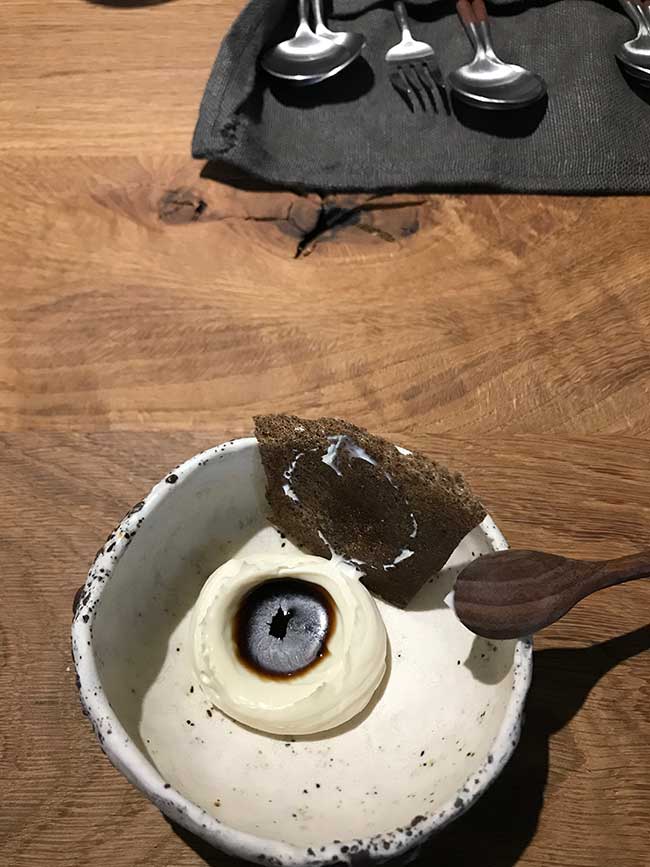 Brambles with Beer and Rye. Rhubarb and Custard and finally a delicious Tiramisu dish. 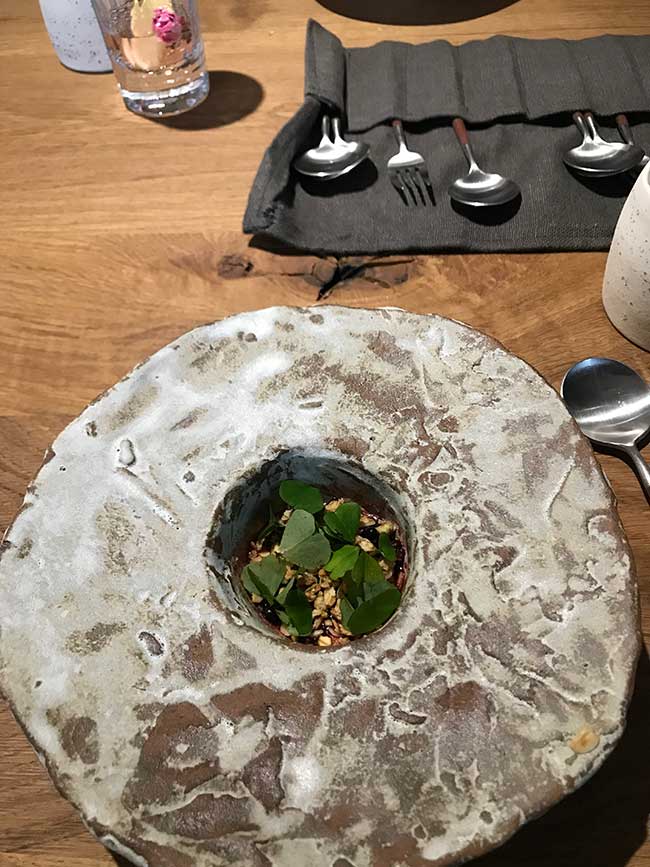 None of these were what you would expect of course. Each was again lovingly constructed at our table and described in detail. They were all very tasty too with flavours exploding from them.

The Tiramisu consisted various dots of coffee and vanilla, topped by a clear glass like shard of sugary sweetness, mascarpone granita and grated 100% chocolate. 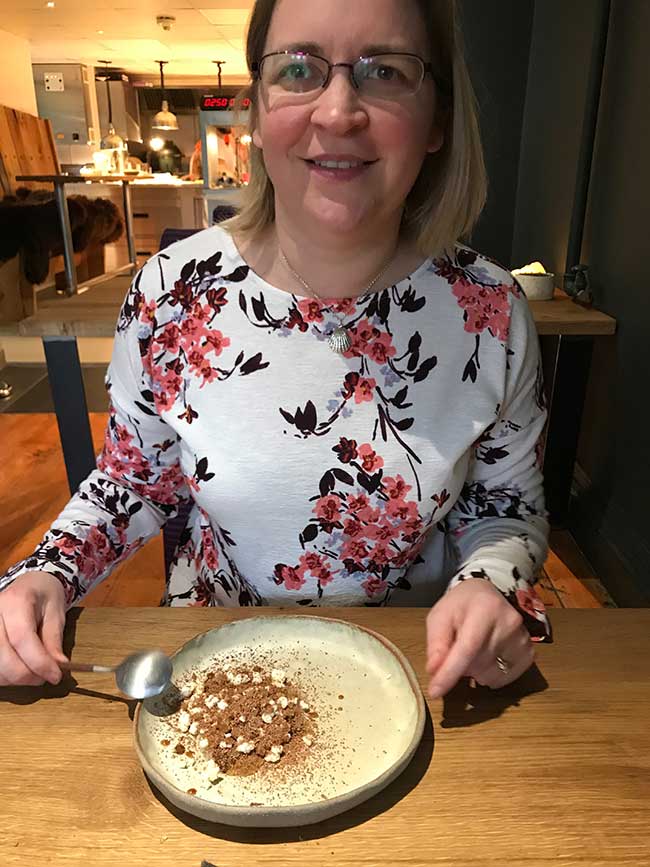 We weren’t done yet though. Next we were taken into the kitchen for a final course. This one was frozen in liquid nitrogen before our eyes. Meringue filled with caraway puree. And that was that. A journey through some amazing tastes and all in the perfect secluded settings of Ynyshir Hall just a few miles from our house.

It was all quite an experience. Not something we are used to so we can’t really compare it to anything else but it was certainly an experience to remember. The Michelin Star and the various awards the restaurant and chef have won would seem to suggest that it is up there with the best. One blogpost that we’ve read since from a seasoned food blogger at ‘Meat and one Veg Blog‘ claims that one Michelin Star is not enough. He states that:

“It is the best meal I’ve eaten, trumping all of the two and three star places I’ve been fortunate to dine at. Gareth Ward and his team at Ynyshir have created a restaurant which rivals the very best in the country.”

In fact, they like it so much that they stayed there for dinner as well!

We couldn’t stretch things that far but instead spent a bit of time sat back in the bar drinking coffee and chatting about the various courses we had experienced. It was soon time to head home having had a very nice afternoon out together. We’d love to go back and try some other menus but we may have to save up a bit before that. In the meantime we’ll just have to up our game a little on the flavour front with our home cooking!