Kitzbuhel Day 3 – I’ve got the Horn

Now that my race was over, it was time to enjoy my holiday in the Austrian Alps. This of course means starting the day with a big breakfast, and with the exceptional food on offer at Hotel Jagerwirt this wasn’t going to be a problem.

That’s quite a lot even for me, but I had plans for a fairly hardcore bike ride today and now was time to enjoy myself – and if there’s one thing that I do enjoy it is eating!

I’ve got the Horn!

My plan for the day was first to cycle up the Kitzbüheler Horn, a 5 mile or so long climb with a fairly steep gradient, peaking at around 25% towards the top I was then planning on coming back down and then cycling up the Hahnenkaam, a similarly high and long climb, but with slightly less steep gradients. 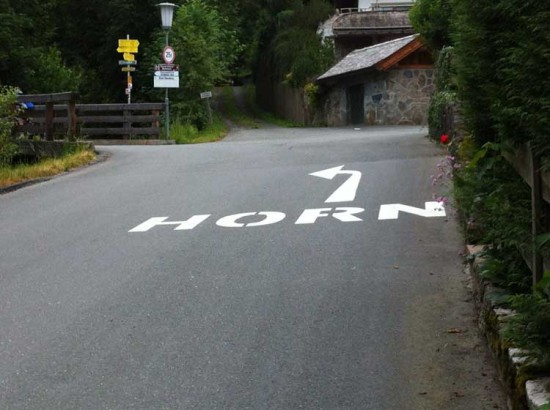 It was still a little cloudy out when I set of, but due to improve so I started my climb of the Kitzbuleher Horn in perfect conditions. No wind, dry roads but with a bit of a chill in the air. As the gradient increased and the road pointed upwards I soon warmed up though. I wasn’t the only one with the idea of riding up here today and I was soon passing people on both mountain bikes and road bikes during my ascent to the top. My smallest gear was a 39×25 which wasn’t ideal as it had me out of saddle virtually all the way up, but I kept on pushing, following the road as it weaved its way up the side of the mountain. The scenery was opening out below me and the sun was beginning to break through the clouds as I made my way around yet more hairpin bends.

Busy on the Horn

There were signs every kilometre to mark your progress up the hill although at times they seem quite a way apart. Towards the top the road did increase in gradient and became quite tough for a while but I then broke free of the trees and could see the summit up above me. Just a few more hairpin bends and I would be there. I overtook more people who all seemed to be struggling now and continued on to the top where I could survey the town of Kitzbuhel below me and lake Schwarzsee a little further away.

On top the Horn

Schwarzsee from The Horn

It was quite chilly up here so I didn’t hang around for long. I took a few photos put my windproof jacket on and started the descent. The road seemed even steeper in this direction and I was soon hard on the brakes as I approached hairpin after hairpin. I stopped again for some photos and then hit the really steep bit which once again had me grabbing for the brakes and feathering them to maintain a sensible and safe speed as I approached the bends. Then all of a sudden there were two loud BANGS and I found myself weaving to maintain control. Both my inner tubes had popped and I was now cycling on my rims desperately trying to stop before the outside edge of the hairpin bend arrived – along with its associated big drop of the end!

I managed to stop in time and saw a guy climbing out of the grass on the opposite side of the road. The huge bangs had caused him to fall off his bike and he later said that he thought he’d been shot! He was cycling up the hill minding his own business when he heard two gunshots and found himself lying on the grass at the side of the road – the only conclusion he could come to was that he had been shot! Obviously he hadn’t and he was fine, which was more than can be said for my inner tubes which were in shreds. I can only assume that the heat build up from the brakes on the rims had caused the tyres to burst in spectacular fashion and as they did the sudden release of air sent the tyres flying off the rims.

Luckily I always carry two spares so set to fixing them both. Yet again I was struggling with the tight tyres and my carbon rims. Once I had them on and started to pump them up I was quite fortunate that an Austrian woman drove by in a car and stopped, asking if I wanted to use her track pump. I did, which made things a lot easier than the small hand pump I had in my pocket and after thanking her I was soon on my way again. I’d put quite a bit less pressure in the tubes this time though and was being extra cautious. The whole event had me a little scared so I used it as an excuse to stop every few hundreds yards to check the tyres and take some photos.

Back down and into the town of Kitzbuhel, I decided against taking on the Hahnenkaam. I now didn’t have any spare tubes so would have to return to the hotel to get more, and I didn’t really enjoy the descent from the Kitzbuheler Horn so didn’t fancy doing it all again. Instead I went for a stroll up to Lake Schwarzsee to see what was going on.

Geocaching in the sunshine

The sun was now blazing as I walked through Kitzbuhel and off into the countryside near Lake Schwarzsee. It really is a beautiful part of the world with stunning scenery and amazing architecture too. The houses are all wooden and fit really well into the landscape and the town of Kitzbuhel itself is pretty too. It is certainly well looked after and very up-market with it boutique designer shops, 5 star hotels endless bars and coffee shops. I found a couple of geocaches whilst out and about, one of which required me to take a selfie!

I also bumped into Roger and Sally, some friends I made in Turkey last year. We stood chatting in the sunshine on the lakeside as we watched the Male Elites start their race in the lake. The views here at this time of year are as good as they get, with wildflower meadows in the valleys giving way to tree lined hillsides and bare rocky mountains with snow on their tops in the distance. Kitzbuhel probably isn’t somewhere I would have come in the summer if it weren’t for Triathlon, but here I was and what a perfect day. I wish I had brought my SLR camera though as the iPhone 4 camera really isn’t up to capturing such stunning scenery. I did my best with it though and hopefully it gives you an idea of just how beautiful the Alps can be in June.

I then headed around to the other side of the lake and watched the rest of the Male Elites race. Alistair Brownlee dominated at the front and came away with an emphatic win – probably just what he needed after recent races.

Once the racing had finished we headed off with the masses. I said goodbye to Roger and Sally once again and then on the walk back to Kitzbuhel got chatting to Carl who I had just beaten in the race yesterday. Most people I’ve come across whilst racing in triathlons are friendly and there is generally a good atmosphere before, during and after the races. It’s always nice to finally put faces to the names that you see on start lists and within the results and these international events always result in new friendships and of course friendly rivalry’s being formed. No doubt Carl is aiming to beat me at the next event!

Back at the hotel and it was time for the eaten to commence once again. As always I was not to be disappointed by the hotel dinner. 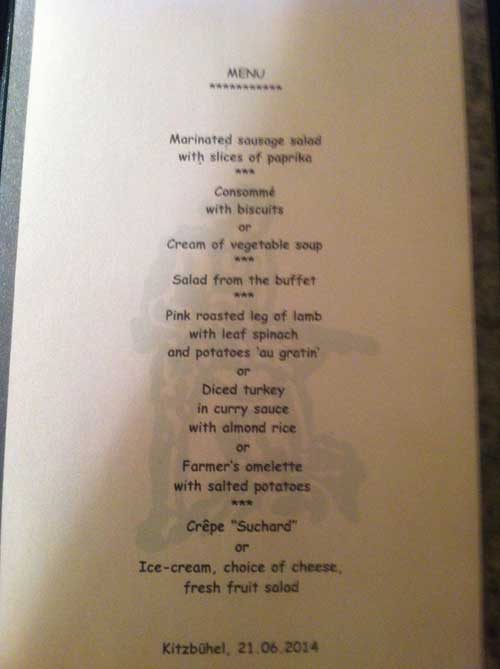