Well, that was a tough race! It all started well with just a short drive to the race venue as this week it was cyclocross Aberystwyth style. The recent 2-3 hour drive to a race was just my usual short 20 minute commute to work. No need for an early start and I should be home early as well. I still arrived at cyclocross Aberystwyth a couple of hours before my race started so that I had plenty of time to get ready, ride a few bits of the course, sign on and chat to everyone. As well as the cyclocross series regulars, many of the local Aberystwyth cyclists were there for me to chat to too.

Held in a field on Fferm Penglais at the top of Aberystwyth the course was tough. There was a fair bit of climbing, a couple of steep sections, plenty of mud and worse still tonnes of grass. The long grass had been cut but the cuttings left on the surface to clog everything up.

I rode much of the course on my mountain bike before leaving it in the pits. I couldn’t quite work out the entry and exit to the pits but assumed it would become clear during the race. Most of the course was rideable and felt OK but it was going to be hard work. I decided that I would run the steep switchbacks at the top end of the course as it would be quicker. There was a also a steep bank with a couple of little steps in it that I would run up rather than ride and two low hurdles that required a dismount for me. Unlike Gruff who was flying over the hurdles I can’t bunny-hop these days as it hurts my arthritic shoulder. That’s my excuse but it would probably end up in a crash anyway! 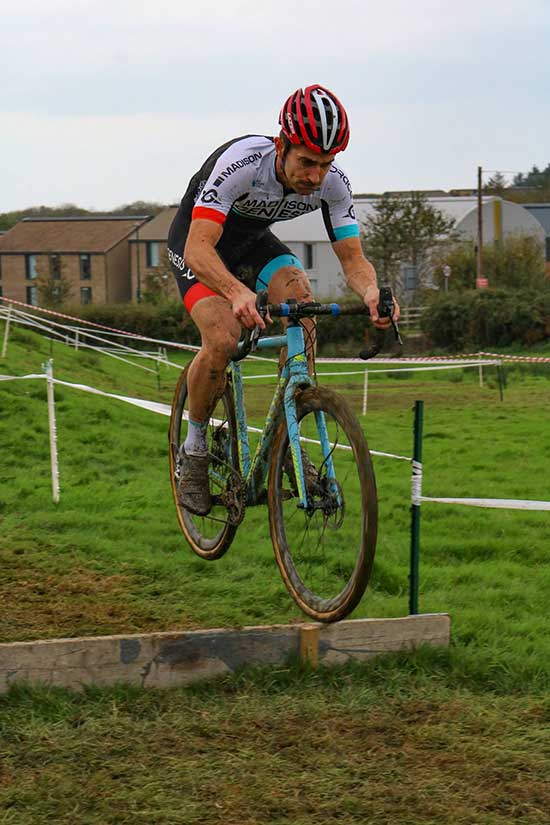 The off-camber banks were a little difficult too.

The overall seeding has me in 17 place at the moment. This isn’t a true reflection of my overall position as I’ve done every race so far in the cyclocross series. This means I have a full complement of points. Many other people have missed at least one of the races so will soon overtake me in the overall standings once they do more races. It’s 7 races out of the full 12 to count this year. So, with a few absentees I was lined up on the second row.

I had a really good start. I held my ground over the first little rise and then took the tighter line and carried loads of speed through the first sweeping bend and ended up going into the first muddy bit close to the front. I was further up the field than I’ve ever been in a cyclocross race. That didn’t last long though. 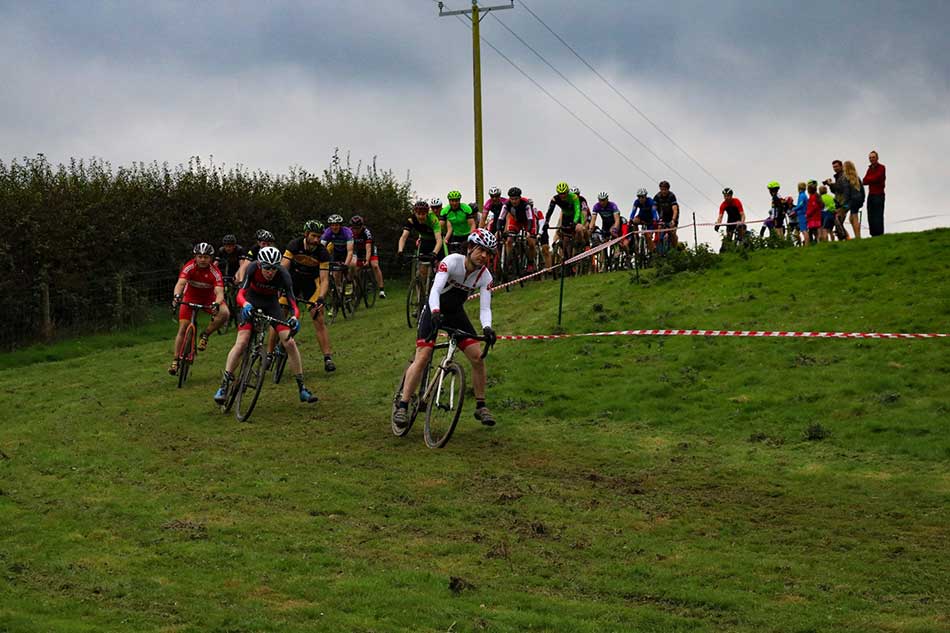 I was soon passed by quite a few people as we went into the first muddy section and then lost loads of places through the series of bends close to the start / finish line. By the time we came out of this section I was back behind where I should have been and had some catching up to do.

I managed to regain a few places over the course of the next lap or so and by the end of the second lap things had settled down and I was where I should be. I hadn’t been going too hard so had enough left to keep going strong for the rest of the race. It was certainly tough though with lots of climbing and some really thick muddy sections.

On the first lap round the thick muddy section with a slight climb was hard work and I thought that maybe it would be better to run it. On the second lap it was harder still and I decided that running would indeed be the better option. That’s what it did each time from there on in. It was a little quicker but more importantly it was a lot easier to run it as it was a lot less energy-sapping. I wasn’t the only one running here. Richie, who I had been for a ride with the day before and was a Welsh National runner was making up ground in this section too thanks to his running background. 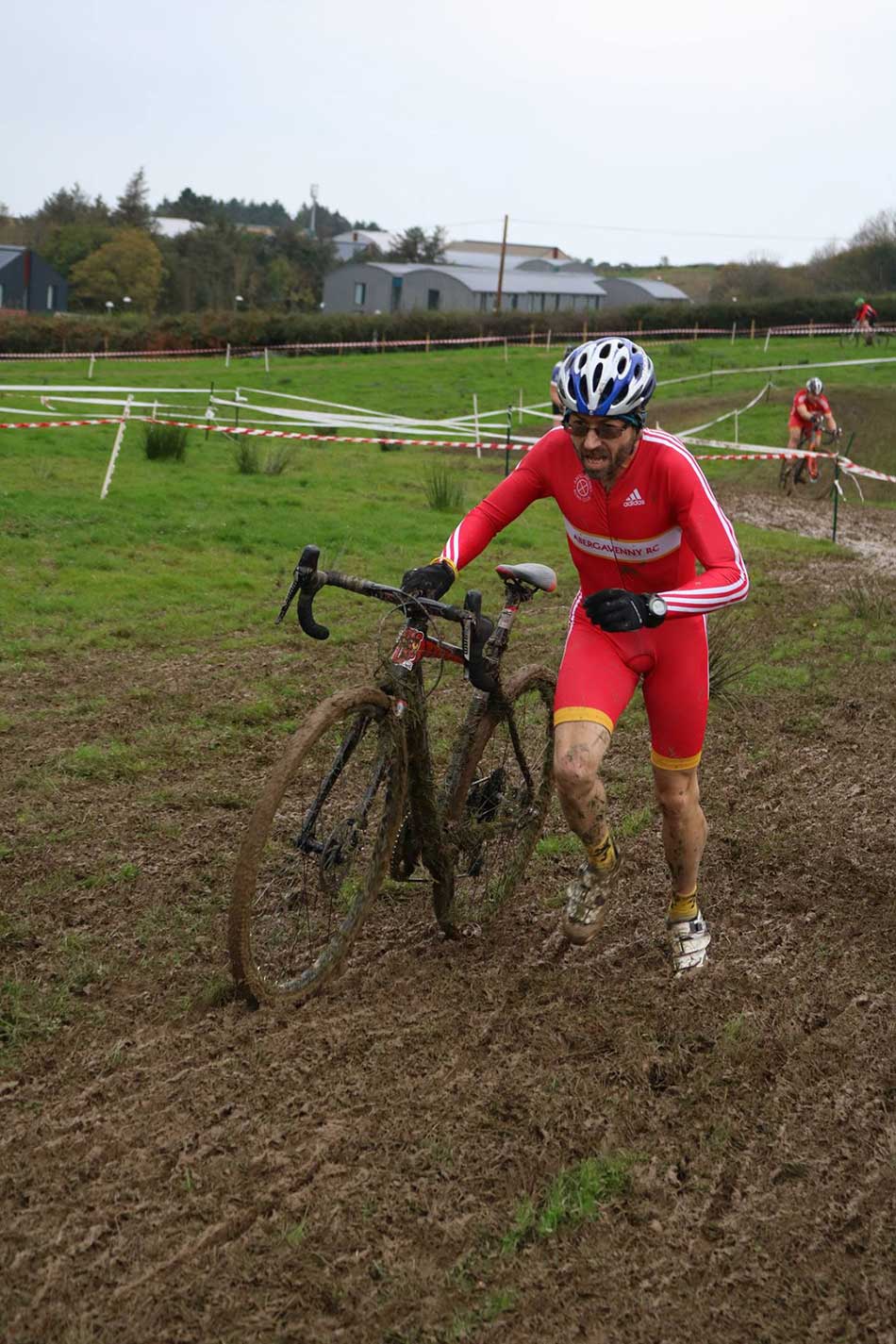 As I put my bike down after running through this the first time though I noticed that the rear wheel was locked up. Rather than spinning as it should do it was just dragging through the mud and not turning at all. I stopped and cleared out some of the grass and muck losing a bit of time and a few places as I did so. It was soon completely clogged again. There was also a strange clunking noise on every pedal revolution. I stopped again and tried to clear some things off my bike but it didn’t really help. I thought about pitting to change bikes but didn’t know where the pit entry was and was too stubborn to change bikes. Instead I just carried on with things getting more and more difficult. It felt as though my legs had just given up but in reality it was now taking quite a bit of effort just to get the wheel to turn. The last lap and a half was a proper strength workout thanks to the state of my bike. I lost a place or two but finished in one piece.

At the finish line whilst chatting to everyone else, I assessed my bike. I simply couldn’t turn the wheel with my hands it was totally seized up. There was nothing mechanically wrong as far as I could see, it was just the sheer mass of grass and mud that had built up between my frame and the wheel. The big chunky bottom bracket housing had just collected so much grass that the accumulation stopped the wheel from turning. There was a big accumulation at the top where the seat stays and seat tube meet too. It had been rubbing so much as I had been riding that it had worn away at the rims of my wheels. They no longer have any marking on them and look more like I have rim brakes rather than disk brakes. I really should have changed bikes partway through! Oh well, that’s another lesson learned.

I was a little disappointed at losing some places towards the end but a little relieved that they were bike related rather than me related. All that was left to do was pack up, a bit of shopping in Morrisons and then a short drive home so that I could spend 2 hours cleaning my bikes! The curry, beer and cakes were well deserved.