I have to admit that I kind of went into this race with the wrong attitude. It had already been a long weekend and the day before I had been giving it my all at the Bude Awesome Foursome Quadrathlon. My legs were sore, I was tired and not really in the mood for a hard cyclocross race. (All cyclocross races are hard, there’s no such thing as an easy one). I drove to Cardiff anyway as I had already paid to enter the race and duly signed on.

I sluggishly rode my mountain bike around part of the course and then left it in the pits and got ready for the race. I had pretty much decided that I wasn’t going to go too hard though. I did a couple of warm up laps again at a sluggish pace and then lined up as we were seeded from last weeks race. The course was looking quite muddy and would be a drag in places. The sand pit was rideable though and there wasn’t much in the way of climbing. There were some pretty tricky off camber bends and lots of slippery mud, both of which I’m rubbish at. I made my excuses to those that I knew around me and before long we were ready to go. At least as ready as I was going to be today.

I went off hard from the start but it only lasted a short while. I got a bit boxed in at the first bend but didn’t lose too many places. Up the steep little slope and onto the gravel sports court I gained back a couple of places. The next 90º bend headed onto a narrow section so it was time for some wide elbows to defend my line but after that bend that was about the limit of my hard effort. I eased into a steadier pace and simply rode around. Chris overtook me on the second lap having dropped his chain at the start and once he was past me I kind of gave up and just rode around the course. My legs didn’t feel too bad but I just didn’t have the oomph! The muddy sections were a real slog, I don’t know how people can ride through them in a straight line, I seem to snake all over the place. My cornering in the slippery conditions was terrible and I had no real energy for the straights either.

I got around the course though and was soon overtaking people from the V50’s and ladies race that started slightly after ours and also lapping some V40’s. I finished in 35th place down a little on last weeks position but with Michael Holwill just one place above me once again. Chris was a few places ahead this week despite his dropped chain but he seems to be flying at the moment this year. Neither of them had done a quadrathlon the day before though!

Not my finest race but I survived it unscathed. I think it’ll take longer to clean my bike than it did to ride the race. 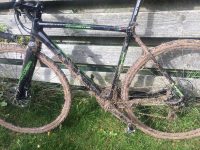 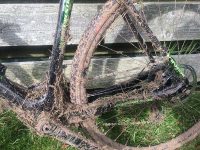