I’m still a little wobbly on it in choppier waters but feel a bit more comfortable on flat water. Getting into it is still a little difficult but once I’m going I feel much more relaxed now. It still isn’t significantly faster than my old heavy Gaisford Ski but that is partly due to the fact that I’m still concentrating on staying upright rather than concentrating on speed. And partly due to the fact that my chest is still sore so I’ve only been taking it fairly easy. The speeds are pretty comparable to my old ski but it feels significantly easier to achieve those speeds. I did however have a friendly reminder from the Aberdyfi Harbour Master yesterday. He was pootling about in his boat as I went paddling past and he warned me that there was a 4 knot speed limit in the harbour and that I was exceeded that! I have to admit that I thought it only applied to motor-craft not surf-skis!

So, onto the modifications. 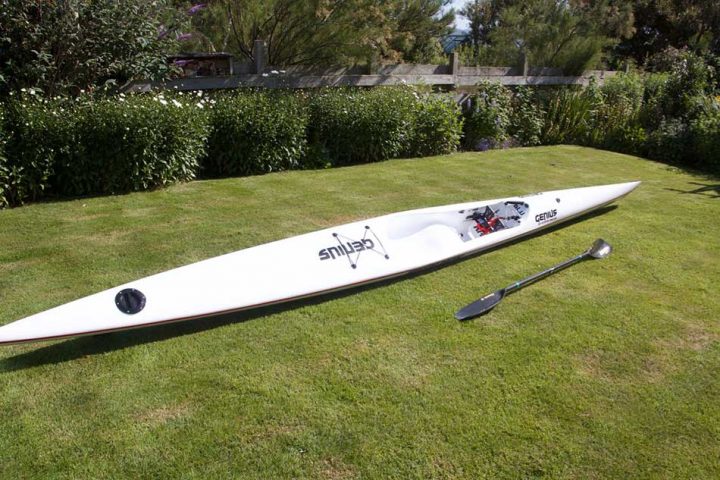 The Knysna BLU was considerably cheaper than the other makes of ski out there but it is also a little more basic. It seems quite fragile too and already has a few little scratches, scuffs and one or two little dents in it. I’m treating it like a baby at the moment but we can’t be too precious about these things as the whole point is to use them. The most likely time to damage it is carrying it to and from the beach or loading it onto the roof-rack or storage racks. I don’t think this is where the scuffs and scrapes have come from though, instead I think it is from the paddle and possible buoyancy aid buckles banging against it while I’m attempting to re-mount after falling off.

To help with this I’ve added a simple paddle leash. I actually bought two as in the link to the right as they were pretty cheap. This means I can completely let go of the paddles while trying to remount and hopefully keep them away from the ski. This stops me bashing the ski with the paddles and means I have two hands free to help with the tricky re-mount.

Most surf ski’s come with some sort of bungee cargo net on the rear deck. The Knysna Blu didn’t so I decided to add some of my own. Obviously I didn’t want to go drilling holes in such a new surf ski to add these so I used some adhesive 3M Go-Pro tethers instead. These were cheap and cheerful at £5 for 6 of them and I decided if it didn’t work I could just remove them with no harm done.

I wasn’t quite sure what I would carry in the cargo net mind you so didn’t really need it but I was hoping that maybe I could use it for stashing the paddles whilst carrying the surf ski to the water. It was also just an excuse for a little surf ski modification project. Coupled with some 3mm bungee shock-cord my surf ski cargo net turned out quite well. My paddles fit under it perfectly freeing up both hands to help with any carries across the beach. 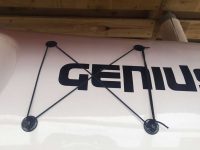 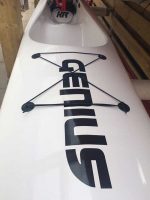 I’ve also added a GoPro mount to the front of the boat. I’ve actually added three as the first two didn’t stick well enough and got knocked off, but the third seems to be holding up OK so far. The mount is a standard 3M adhesive GoPro mount that along with the usual GoPro extensions allows me to point the camera anywhere I want. Either backwards towards me so that I can analyse my paddle stroke after  a session or forwards so that I can film where I’m going. It does place the camera too far away from me to control it so I might have to put a GoPro Remote on my shopping list so that I can start and stop it when I want rather than having to record a whole paddling session.

I do also tether the GoPro to a fixed point on the ski so that I don’t lose it should it get knocked off. I don’t know how everyone else manages to attach GoPro cameras to surf boards, SUPs etc and then use them in waves. Whenever I’ve tried this the camera gets knocked off after one or two waves so it’s always best to have it tethered as well. I simply tie one end of a piece of paracord around the camera and tie the other end around the carry handle on the ski. This brings me onto carrying the ski as the carry handle seems pretty useless to me other than as a tether point for my GoPro!

Carrying a surf ski is always difficult. They may not be too heavy but they are 6m long, slippery and tend to catch the wind. Some surf skis come with built in handles on the edge of the seat bucket to help with this. The Knysna BLU does have a handle but only one. It is however positioned at the front of the footwell on one side. It seems to serve no purpose here as it only allows you to drag the ski along from this position. So far I carry it in a number of ways.

For short distance carries when it’s dry I tend to hold it with two hands on the side of the seat bucket. There’s just enough purchase there and with both hands it’s easy to balance and manoeuvre.

When it’s wet though it’s far too slippery to hold it like this. For shorter distance carries when it is wet I tend to tuck it under my arm and rest it on my hip more like a surfboard. It is still very slippery like this but I can at least stop it from slipping completely with my thigh should I start to drop it. 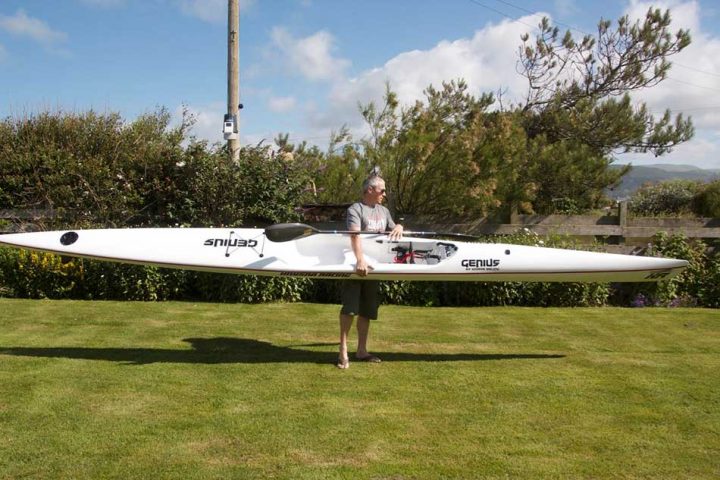 For medium distance carries I tend to hoist it up onto my shoulder. With the paddle safely tucked into my new cargo net modification I can hold it onto my right shoulder with my right hand over the edge of the seat bucket and then stabilise it with my left hand should the need arise. 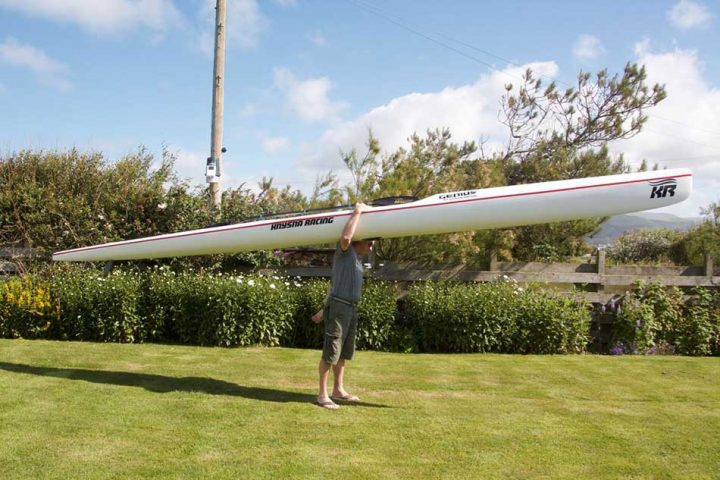 This is also the best position for sliding it onto the roof rack. Although, once again when it is wet getting the necessary purchase to slide it up and onto the racks can be tricky. And wind also make this shoulder carry technique a little more difficult as even the slightest breeze from one side tends to spin you around.

For longer distance carries such as the few hundred yards along the road, across the golf course and onto the beach I’ve been using my SUP carry strap to help out. Anything longer than that and it goes onto the clever Whispbar roofrack of the van.

The carry strap is a simple piece of webbing with two loops and a shoulder strap joining them. The loops slip over the ski and end up positioned either side of it’s balance point. The shoulder strap goes on my shoulder and the ski then rests alongside me. I can adjust the length of the strap to get it in the right position and I then have both hands free. I do generally still hook my right arm around and under the ski for extra support and if it’s windy use my left hand to stop the ski from spinning. The shoulder strap just helps spreads the weight and adds a couple of extra points of contact both on the ski itself and on me so that everything is a little easier.

The lighter weight of my new ski compared to the old one means that so far I haven’t used the little canoe trolley that we have, maybe once I progress to using it in more extreme, windy conditions then this might be a better bet for getting it to the beach though.

Proper carry straps on the ski itself from some webbing in the foot well would be nice. I don’t think attaching these with adhesive would be sufficient so it would mean drilling the ski to attach them – not something I’m willing to do at the moment. I have thought that maybe just sticking some strips of skateboard grip tape along the insides of the bucket would help. This would just add some much needed grip when the boat is wet. They shouldn’t get in the way at all when paddling and would look OK too. So far I’m getting away without this additional surf ski modification but maybe once it’s cold and my hands aren’t working as well as they normally would some extra grip will be needed.