My parents were heading home on Sunday so rathe than do something here we thought we’d drive south with them for a bit so that they had started their journey home and then stop off somewhere for a wander and some lunch. We inadvertently ended up at the Aberaeron Seafood Festival.

We decided before we left to head to Aberaeron. We warned my parents that there wasn’t much to do there but as they;d never been there before it seemed like a good place to stop. It wasn’t too far from us, just a 50 minute drive. It wasn’t quite ont heir usual route home either but they could continue south from there, towards Carmarthen and then onto the motorway so it was less of a drive from Aberaeron than from our house even if the total drive for the day was slightly longer.

Morgan and James didn’t want to join us so we left them at home and headed off in convoy with Anna and I in our car and my Mum and Dad behind us in theirs. The drive was through thick mist at points and low cloud hung over Ceredigion. When we arrived in Aberaeron we headed to the usual car park but it was packed with not a single space available. We headed on to the seafront and the car parks there were the same. We did just manage to squeeze in eventually, but we were parked on the road and my parents were parked in an undesignated spot beyond the car park itself. It looked as though Aberaeron was busy!

We decided to wander along the seafront towards the harbour. The weather was still overcast but dry and the thick bank of cloud could be seen out across the who of Cardigan Bay. As we approached the Harbour though the slightly dreary mood created by the grey weather was lifted by the sound of folk music. As we got closer we could see a stage with a band playing on it. 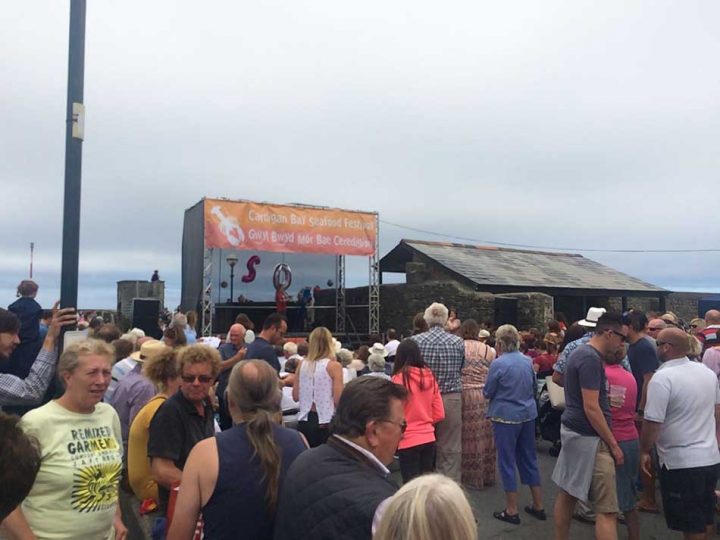 There was no indication of what was going on though. We rounded the corner and were greeted with a row of yellow and white striped tentage covering a collection of market stalls and a huge number of people. There was a big crowd around the music stage but even more people thronging around the market stalls. We had stumbled upon the Aberaeron Seafood Festival. 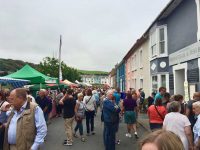 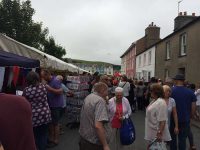 We’re not big on seafood but we wandered along taking in the sights and sounds. A few things took our fancy and my mum bought a giant meringue from the Medina stall for my sister. There were a few free tasters here and there but not many really. We rounded the corner by The Hive and there were yet more stalls and even more people. These stalls were a little more interesting to us as they were packed with cakes, Ciders, Beers and at the end giant paellas and a pizza oven. 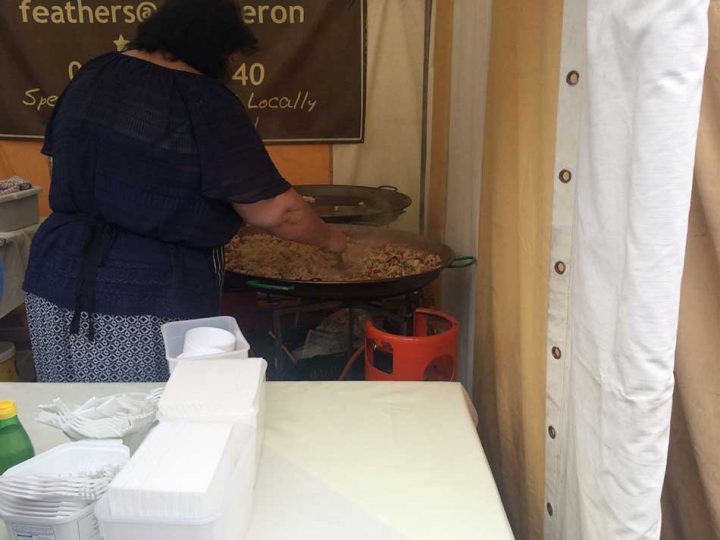 There was a stall with cakes from the apparently quite famous Alana who I’d never heard of. Anna educated us that she had won The Apprentice (something else that I know little about) with here ‘Deliciously Rich’ cake sales. We decided we’d come back after lunch and buy some of her cakes just to try them.

We then headed into The Cellar for lunch. We’d been here a few times before and knew that it was nice so we soon seated inside. We had only expected a snack for lunch really but ended up with a proper meal. Roast dinners, Fish and chips and a burger. We then headed into Aberaeron proper for a stroll along the main road before heading back to the harbour. 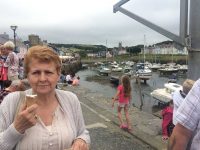 We bought some cake by Alana and my parents had some honey ice cream. We then wandered back along the edge of the harbour taking in the sights and sounds before strolling along the prom back to the cars. Here we said our goodbyes and headed off in separate directions.

The Aberaeron Seafood Festival had meant that our trip to Aberaeron was a little more interesting than it otherwise might have been. It’s strange that there were no signs or indication that the Seafood Festival was on though. You would at least have expected a few signs along the main road.

Back at home I headed out for a paddle in my surf ski and then played on the slack-line with Morgan. Dinner ended up being a non-event as we’d had such a big lunch. I did eat all of the cakes we’d bought in Aberaeron though and a whole 200g bar of Galaxy though. Morgan headed off to the cinema, I watched the Tour de France and then spent a couple of hours on the bike and Anna relaxed after a busy weekend.