Campervan Trip to Peaks and Shropshire

Our time at Acorn Wood Campsite came to an end. The plan was to stop off in the Peak District on the way home. I had arranged a dinner at a pub called the Crag Inn in the middle of the Peaks and had been given permission to camp in the pub car park overnight. We therefore left Lincolnshire and headed for the Peak District.

We stopped off just inside the Peaks at a little picnic spot for lunch and then continued on our way to Buxton. It had been wet most of the morning but the rain had now stopped. We pulled into the car park at Poole’s Cavern and headed off for a walk up the hill to the Victorian fortified hill marker known as Solomons Temple or Grinlow Tower. Morgan I climbed the spiral steps to the top for some nice views out over a cloudy Peak District. We found a geocache and then headed back down the hill for an ice cream. 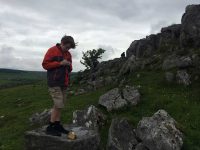 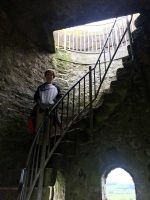 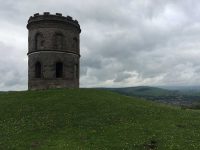 View from the tower 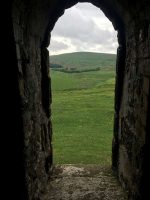 Window with a view

We then headed off towards the Crag Inn to find our camp spot for the night. The drive across the Peaks was nice and the sun was coming out as we headed down into a wooded valley to find the Crag Inn. As we pulled up there were kids racing around on quads and scramblers. We were greeted by a bearded man who was presumably the owner. He told us that they were closed. We explained that we were just checking it out as we were returning later for the dinner and camp-spot that we had arranged. He said that they weren’t open to the public tonight as there was a Young Farmer’s party going on and asked who I’d arranged it with. I told him Melissa, so he went off to have a word with her. Apparently Melissa knew nothing of these arrangements but they had decided we were welcome to stay if we wished. We said we’d think about it, but soon decided to find somewhere else instead. In my defence, here’s the conversation I had with Melissa – fairly clear if you ask me and certainly no mention of the fact that they were closed and had a private party on.

We didn’t find anywhere else nearby to stay so decided to start heading in the general direction of home whilst looking for a campsite. Anna was frantically searching the web as we drove along. Eventually we pulled over in a layby and booked a camp-site called Church House Campsite on the Welsh Borders. It said that it was a peaceful riverside site next to a fourteenth century church, but what clinched it for us was access to the River Vyrnwy and River Severn for kayaking and canoeing. We booked in and headed along various winding country lanes for miles and miles until we finally found it.

It was just as advertised, a quiet, rural setting right on the banks of the River Vyrnwy which marked the border between England and Wales. We were still in England but the cows chewing on the cud on the field that our pitch overlooked were in Wales. 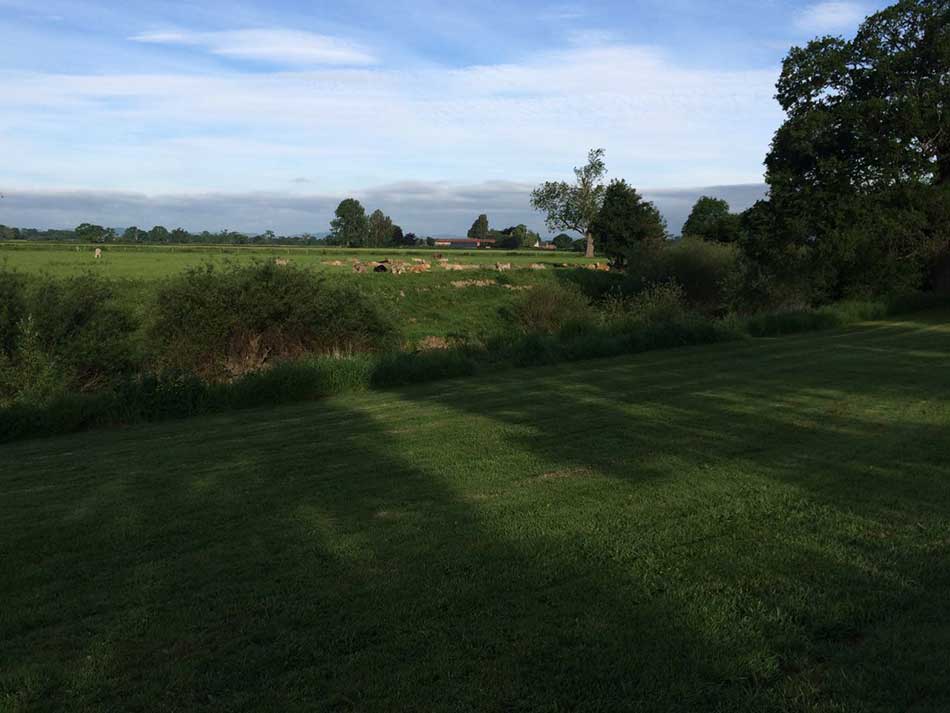 Cows on the Welsh Border

We were shown around by Paul the owner and then set up the awning in a bit of a gale. 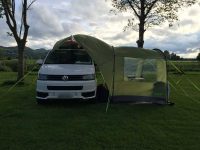 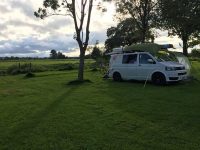 Once settled in we wandered around and Morgan and I went off to explore the church. The black and white timber-framed St Peter’s Church is one of only three such churches to be found in Shropshire and one of 27 in England. It is the oldest of its kind. The church was rebuilt in 1406 after Owain GlyndÅµr burnt it to the ground in 1401. The church has a Jacobean pulpit and a chained bible dating from 1727. It also houses a Saxon font, a survival from the original pre-1401 church. Baptisms have been taking place at this font for 1000 years. 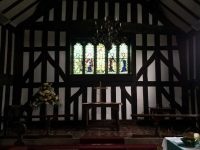 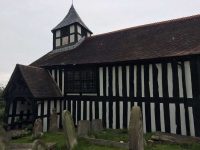 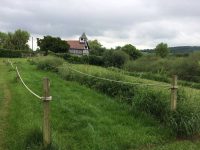 It was a lovely peaceful spot on the banks of the river and the church is still in use today. There were plants for sale in the entrance and notices inside. It even now has it’s own website – something I’m sure the people in the 1400’s couldn’t even imagine.

We chilled in the van reading our books and cooked in the van for dinner before settling down to a quiet nights sleep. The wind had eased and all was well with the World.

I was up early the following morning so sat there as the sun rose reading my book. Anna and Morgan slept on in the camper. I headed off for a run following the route of the Severn Way in the early morning sunshine through fields of sleepy cows.

Back at the camper it was time for breakfast and then I headed off for a bike ride. Almost 40 miles of countryside down to Montgomery and then back, crossing the Wales England border a number of times.

I had hoped to go for a paddle on my ski along the River Vyrnwy and then onto the River Severn but the access and exit point looked a little difficult. I wasn’t sure if I’d be able to get my ski back out of the river there so decided against it. Instead I strolled along Offa’s Dyke and wandered around the campsite in between chilling and reading our books. A very relaxed afternoon in the company of Anna, Morgan and Ramsey our camper.

We decided that curry from the local pub would be a good option for dinner. The pub had an Indian chef and also offered delivery. We chose from the menu and phoned through our order. They said it would be 35 minutes so we got ourselves ready and waited with anticipation for the arrival of our dinner. An hour passed and still there was nothing. Another 15 minutes went by and now we were getting hungry so Anna phoned them to find out where it was. “We’ll send it out now” was the reply. The pub was a 10 minute walk away, a 3 minute cycle or a 2 minute drive, but a further half an hour passed and still no sign of our dinner. Finally, two hours after ordering it turned up without even an apology for the delay.

We soon tucked in though and it was very nice. It was also getting quite late by the time we were done so we relaxed a little more in the camper as the sun set and then settled down for the night.

The following day we were homeward bound. Everything was nice and dry to pack up, although things were a little sticky from tree sap. We packed up and headed into a garden centre in Welshpool for brunch before making our way home. Dana and Mark had been house-sitting for us so Anna drove them home while I tended to the garden and gave the camper a wash. The end of a nice few days away and a decent trip thanks to our VW campervan.