Despite a 6 hour mountain bike ride in the Tide to Tide on Saturday I was due to race in the Pembrey Dune Cross on Sunday. This was round 3 of the Welsh Cyclo-cross league. I was awake fairly early so left Anna sleeping in the tent and headed off into Pembrey Country Park for a walk as the sun rose. It was a lovely place to walk around on such a crisp clear morning even if it was only just above freezing. The beach of Cefn Sidan is impressive too with it’s huge expanse of sand and waves rolling in to the shore. I should be used to such things living on the beach but you can’t beat a new beach and I’m surprised that I’ve never been here before. The spray from the waves was hanging in the air above the sea as the sun rose illuminating it with the oranges of sunrise.

I walked along the beach, a little sore and stiff from the efforts of the previous evening but enjoying the peace and quiet. I then headed into the dunes and onto the various trails of Pembrey Forest. I stopped off at a bird hide overlooking a pond and then came across some of the signs and taping ready for the cyclo-cross races that would get underway from about 10am. I decided to follow it around to see what the course was like. I soon came across a flight of steps which were hard work to walk up with my aching legs and back. Soon I’d have to run up these carrying a bike! The course looked good though and hopefully I’d feel a little more sprightly later in the day. The course was much shorter than that of yesterdays Tide to Tide race and the bits of it that it used were in reverse. By now I had walked about 3 miles so headed back to the tent to have breakfast and get ready.

Anna and I wandered over to the Race HQ where I signed on and got my timing chip on what was now a glorious, warm October day. We then watched a little bit of the kids race, chatted to some friends and then headed back to the tent to get ready for my race. This week I left my mountain bike in the pits just in case I needed it. I only had time for one little practise lap but all felt fine. We then assembled for the start and were called into place based on our seedings from the previous week. I was getting to know a few faces by now and a few people knew me too. This was mainly due to the fact that I had posted a GoPro video clip of some parts of the race last week. Apparently you aren’t allowed to film during the race from such a device so this week the video is from a practise lap.

There was a bit of a wait at the start while everyone was lined up but then the gun went and we were off. I tried to go a little harder right from the start this week to get a better position into the single track. I think it worked as I didn’t feel as though people were just streaming past me. My legs were pretty tired though so I did get passed by quite a few people on other stretches of the first and second lap. I soon settled into things and started passing people myself. I’m sure there were a few of us swapping places throughout the race as well. As in previous weeks I tended to pass people on the technical bits where we were running with our bikes, but lost out on the twisty, slippery sections.

Anna was watching and taking photos from the side-lines as I came into the start / finish area each lap and the time was soon ticking by. I was tired but still pushing hard as I crossed the finish line to the sound of the bell. One more lap so on I went, determined to pass just one or two more people. That I did and soon it was all over. Another 40-odd minutes of pain, suffering and fun. 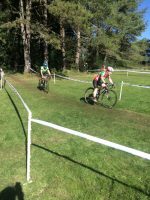 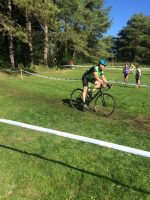 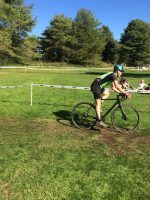 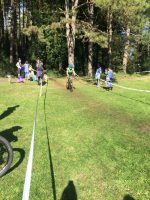 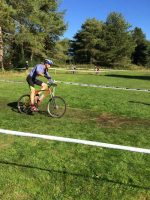 I’m not sure how well I did this week yet as the results aren’t out, but even though the legs were tired from 6 hours on my bike the previous day I think I did OK. I can’t wait for Round 4 next weekend.