Who would believe it? Anna, 40 years old already. We did of course tease her suitably about this landmark age, but not too much seeing as many of us are already way past this age! We also marked the day with something of a party.

I’d been working on the garden in the sunshine for a few weeks preparing it for the big garden party, the lawns were mowed, the flower beds were neat and tidy, weeds had been eradicated and everything was looking nice. Thursday and Friday were then spent shopping, cleaning the house and setting to work on a massive bake-off.

All lovingly prepared. We were planning a morning out in the woods playing laser tag, followed by lunch. Then, afternoon tea and cakes and finally supper in the garden. So as well as the cakes, various lunch snacks were readied and some food suitable for supper were prepared too.

Invitations had been sent, plans made, a massive OTT chocolate cake had been ordered and everything was under control. Everything that is except the weather. It had been gorgeous all week but the forecast had been promising rain for Saturday. That was bound to change by the time Saturday came around though so we remained hopeful. However as it approached, the forecast rain simply changed to a forecast of torrential rain. And rather than just coming in the afternoon, it was now going to be all day long! This was made even worse by the fact that it was supposed to be really nice again for the following week.

There was nothing we could do about it though as we rushed to the car to avoid a soaking and drove towards Nanteos Mansion to meet Shoreline, the organisers of the Laser Tag. We stopped off en route to collect James and then Morgan and Tom. All the while, the torrential rain was simply getting heavier.

Luckily it had eased a little as we pulled into a muddy forest layby ready for a morning running around a sodden woodland shooting each other. Everyone else soon started arriving. Annamarie and Evie, Steve and Biddy, Laura, Lee, Saffron, Anakin and Cerys, Martine, Rhys and Sarah, along with me, Anna, Morgan, James and Tom. Dennis & Sophie didn’t quite make it but I’m sure we’ll see them soon.

Waterproofs were checked, boots adjusted and we were off, running through the woods like crazed soldiers, wielding our bright orange guns and shooting each other. The guns were easy to use and after the first short game we all had the hang of it. It worked really well with fairly short games to keep the interest up and a variety of different formats. The teams were well balanced and we soon had various tactics to employ. Everyone seemed to be loving it.

As it was Anna’s birthday we handicapped her somewhat by making her wear a hi-vis jacket and a bright purple wig. At least we didn’t make her wear her birthday onesie as well! 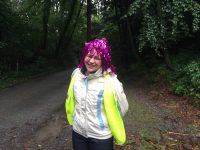 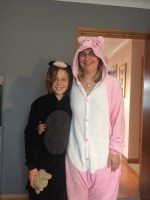 The rain was soon forgotten about and in fact it probably made it better as had all resigned to the fact that we were going to get wet and muddy so there was no reluctance to roll around on the floor, crawling through the undergrowth whilst stalking the enemy. The rain had transformed the usually quiet burbling stream into a raging muddy torrent, but even that didn’t stop a few of us (Me, Anna, Morgan and Lee) from throwing ourselves headlong into it to make a short crossing to capture the flag.

Conditions weren’t great for photography either but here on some blurry shots of us enjoying the woods.

Morgan in the Woods

Everyone was shouting, laughing and recalling their best moments as they took out a member of the enemy team, got stuck in some prickly undergrowth or stumbled in the mud. No one was taking it too seriously of course and it was all good fun.

Laser Tag in the Woods 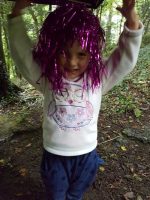 The garden part of the party had been abandoned! It was still raining and now it was pretty windy too. Running around a woodland in waterproofs in the rain is one thing. Sitting in the garden eating cakes and making merry in the rain is another so we moved indoors. Everyone came back and there was food aplenty. Lunch was snacks and sandwiches, but then the cakes came out. As well as the ones we had made (which were more than enough for twice as many people as we had), a few people had also brought cakes and Anna’s mum Pat had paid for a special birthday cake to be made for Anna. I usually make her birthday cake, but as it was Anna’s 40th it probably was a good idea to get one professionally made – not that mine don’t taste nice, but I’m not necessarily so skilled at the decoration. It was a good time-saver too and the results were really good.

I had commissioned a local cake maker Amy Thomas to make the cake and had given her some instructions of how I wanted it to look and told her that we wanted it to be a:

Nope, that’s just what we were after and it certainly looked impressive. 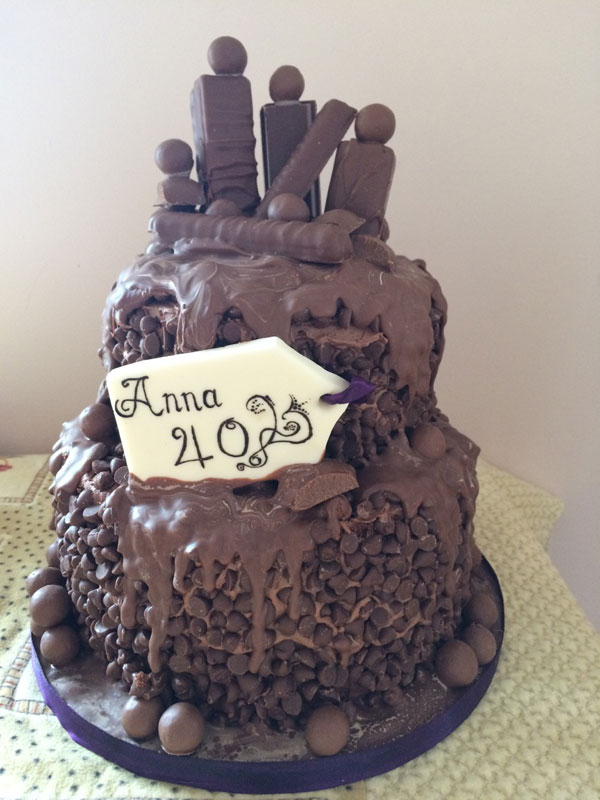 That’s a Crunchie, A Mars Bar, A KitKat, a Twix and a Twirl on the top, along with loads of dairy milk and Maltesers. Drinks tended to be cups of tea or lemonade rather than anything stronger but that was fine – I think it must be a reflection of Anna’s age though!

Other people joined us throughout the day. All the people who had been at the laser tag were there for some or all of it, along with Pat, Ted, Ruth, Phil, Jo, Danny and Mike. There were plenty of children too to keep things lively. The boys that had been playing laser tag, Morgan, James and Tom had been cleaned of mud as had Evie and they were joined by Arthur, Griff, Iwan, Llyr, Amelie, Kai and Cameron so we soon had a full house and everyone was chatting, playing and having a good time.

The rain did ease off for a while, just long enough for a few people to have a wander in the garden. The curry, chilli and paprika chicken went down well too and the we sung Happy Birthday to Anna and cut the cake. 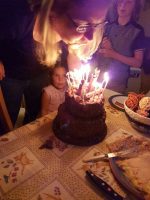 Blowing the Candles out 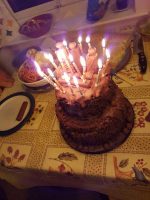 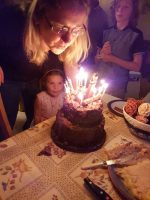 There was of course loads of food left as people started leaving and even with our best attempts to make sure people left with armfuls of food we still have enough here for an army today. It looks as though we’ll have to put the healthy eating plans on hold for a day or two yet!

As you can tell, everyone had a good day and everything went well despite the rain…. Thanks to everyone for coming and Happy Birthday Anna!!!