It’s been a while since I did any Coast Path running. There have been various reasons for this, including the Ocean Lava half ironman race in Fishguard. We fancied a few days away though so I hatched a plan to go camping on Anglesey so that I could do some early morning running along the coast path while we were there. A family trip away, camping, visiting tourist attractions and a continuation of my plan to run around the entire periphery of Wales.

My last Coast Path run finished at Four Mile Bridge on Holy Island. Purely by luck the campsite we had booked into was literally right next to Four Mile Bridge itself so was the perfect starting point for the next leg of my Coast Path run. It couldn’t have been closer or better located. I just had to step out of the tent and I was exactly where I was supposed to start my run.

So, after a short sleep in the tent I got up early, got my running kit ready and left the tent.It was 5:14am when I left and still a little dark. In fact it was only just light enough as I left the campsite. 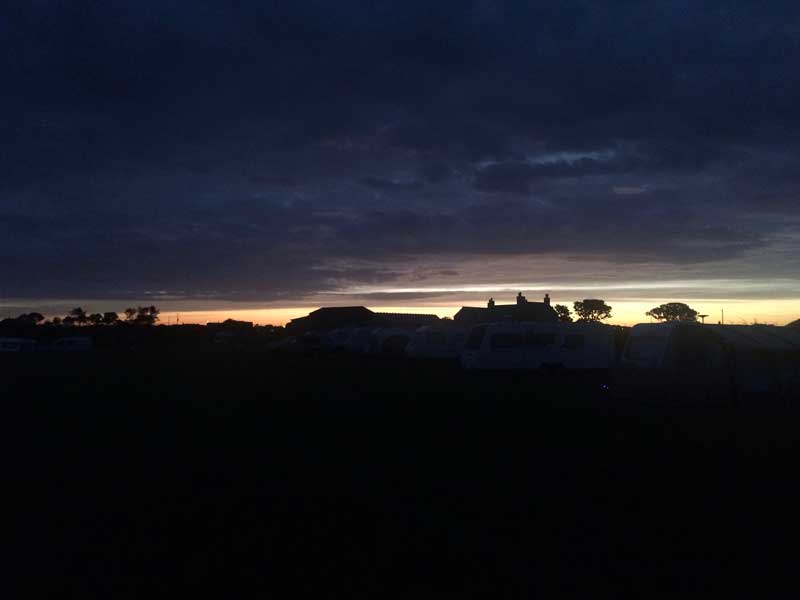 I ran across Four Mile Bridge onto Holy Island and turned left onto the shoreline where the sunrise was spilling bright oranges onto the ebbing tidal waters. 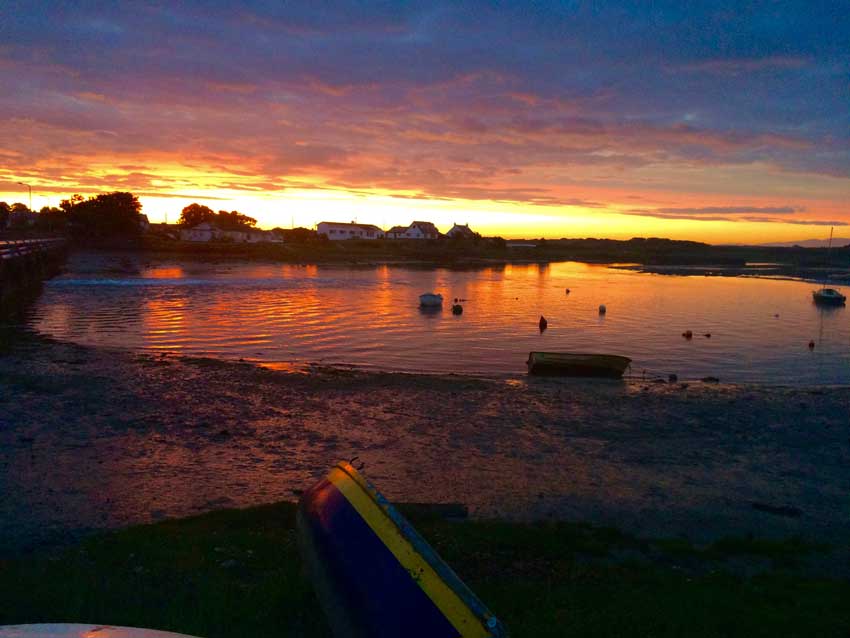 My route took me along the soggy shores and across a number of boardwalks.

It then headed inland a little  through little areas of woodland, across fields and up over a few small hills. All the while the signposting was good so following the route was easy. My right achilles was a little tight though so as usual on the Coast Path I was taking things easy and watching my footing. 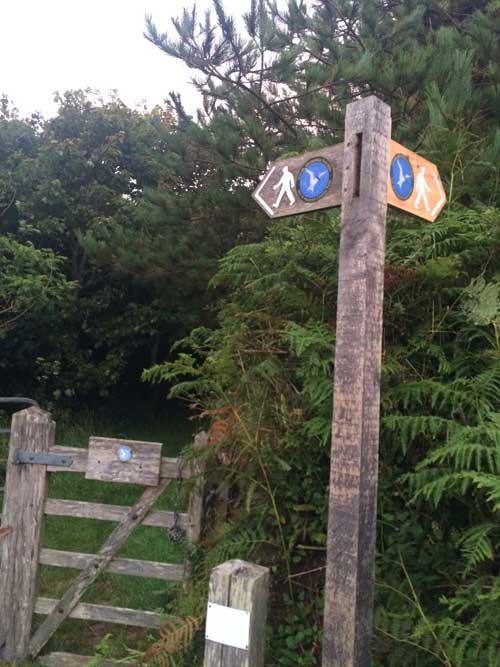 On I went, through woodland, along country lanes, through farmyards and then back down towards the sea. All the while, the sun was still making it slow progress into the sky.

I emerged out onto the coast at Silver Bay where the white sands stretched out before me. Needless to say at this time of day it was deserted and just the way a beach should be. The low tide waters lapped at the sand and all that could be heard was the haunting sound of curlew and lapwing.

The going had been easy until this point so even my breathing didn’t disturb the peace and solitude. 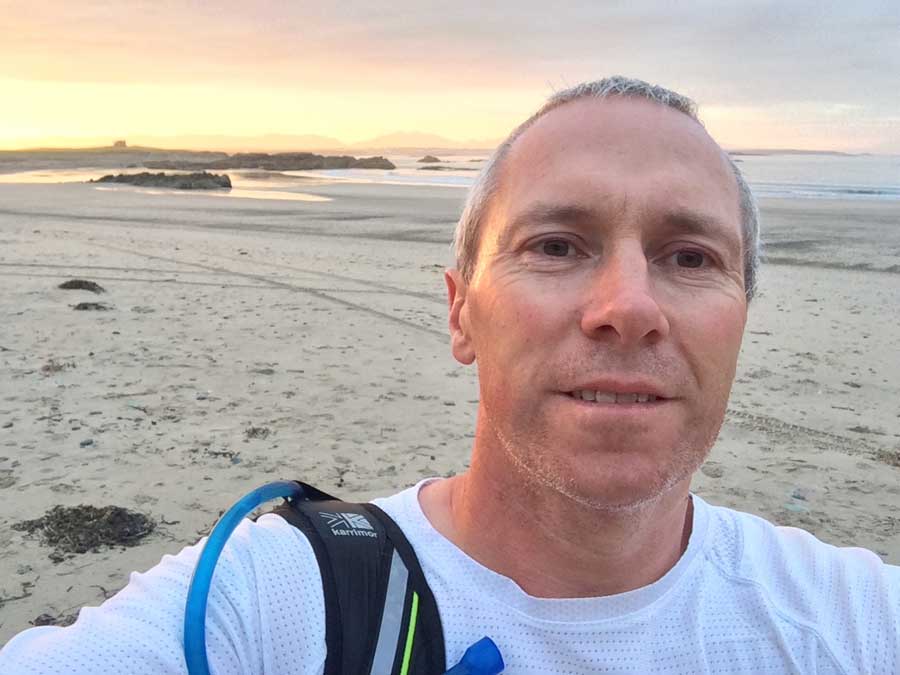 The Coast Path became what I like to call ‘proper coast path’ from here. It wiggled it’s way along the edge of small cliffs, up and down into secluded bays and inlets and constantly changed. Rocky steps here, heather heath there, slippery mud, small bridges and gates, all the while with the sea to my left. Onto the sands of Borthwen and then back up over a hill an up to a coastguard lookout. 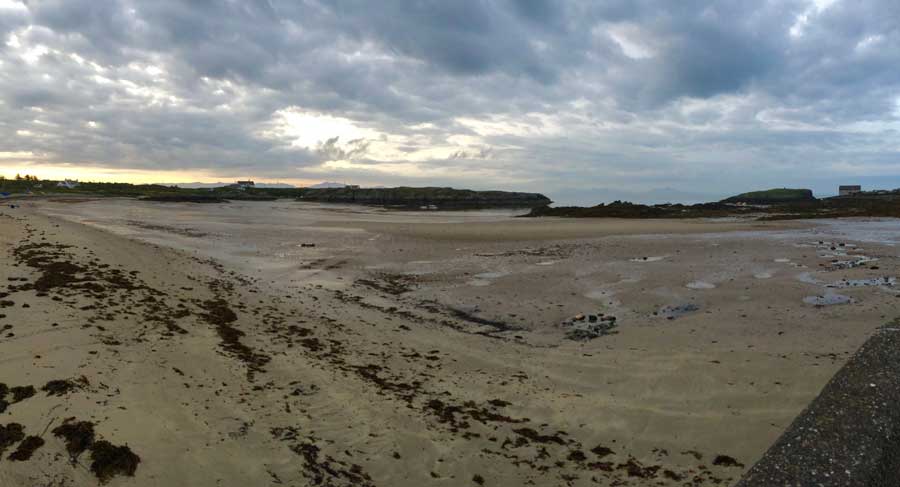 The scenery became increasing geological as I went. We used to come here on Geology field trips. I didn’t recognise any of the exact locations as I ran past them, but there was plenty of geology in evidence as I ran along the coast. 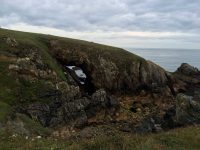 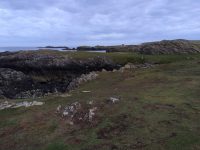 This entire stretch was a lovely section of Coast Path. Every changing it kept me on my toes and seemed to fly by as if it weren’t there. I was still taking it easy, but the miles were ticking off and before I knew it I was climbing up through a caravan site and on towards Trearddur Bay.

Eventually I emerged from the heather covered clifftops out onto the road into Trearddur Bay. Here I passed loads of really nice looking house, all perched on the tops of the small cliffs, looking out over the sea. Each house and bungalow was unique and many seemed to have interesting designs and rambling layouts. The all sat huddled from the elements that must at times batter this coastline. Today all was still and tranquil though as I ran down past the natural harbour of Porth Castell which was full of boats and on into Trearddur Bay itself. 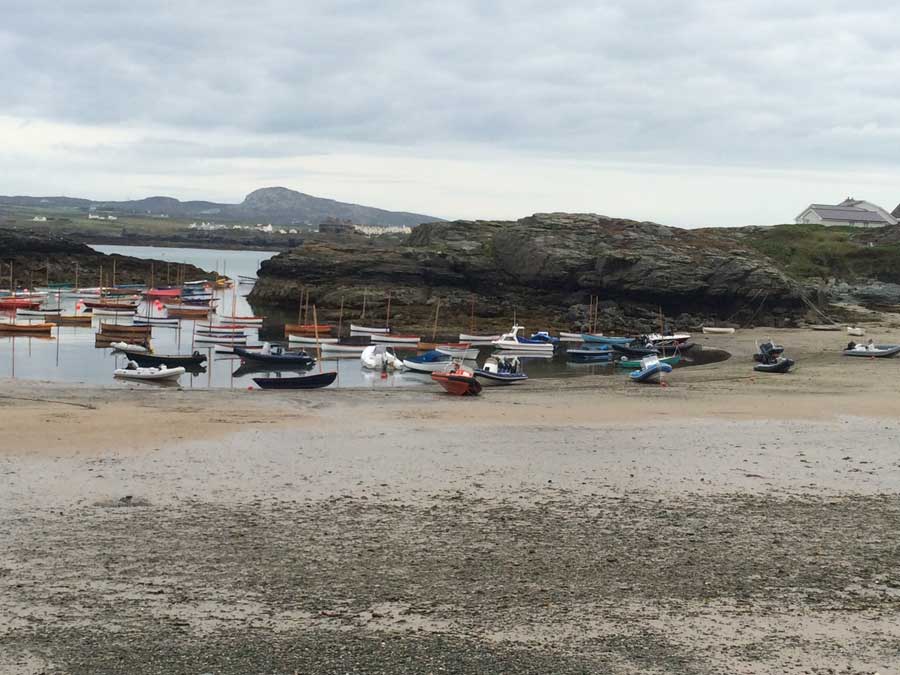 Here the coast path turns left along the promenade but I left the Coast Path behind me and headed right back towards Four Mile Bridge. Usually my Coast Path runs are point to point followed by a public transport adventure back to my starting point. Today, it was just a mile or so back along the road to the campsite from here so I made a loop of it and less than two hours later I was  back where I started.

Just a short Coast Path run for me today, but that meant I had all day to spend with Anna and Morgan. I had half planned to do the rest of Holy Island the following day, but as my achilles had been a little sore I decided it was best not to. Despite that, it was an other good day on the Coast Path and another 10 miles completed. We’ll have to come back soon for a slightly more concerted effort at the rest of Holy Island and maybe onwards around Anglesey.