A Lean-to Roof – The Building Continues

As you know from my previous post about building a lean-to, we were delayed in putting the roof on whilst my Dad was here thanks to the fact that Sheet Plastics who we’d bought the polycarbonate sheets from failed to deliver on time. We’d paid £20 for a specific delivery date on the Friday, but it didn’t arrive until the following Monday meaning we were unable to finish the project whilst my Dad was here. He had come up specifically from Gloucestershire to help us, but now we were on our own.

We didn’t even have time to open the sheets or check them during the following week and then it was just too wet and windy over the weekend to fit them. Anna and I did have a brief attempt at getting a sheet into place last weekend but the wind became too strong so we had to retreat and leave it for another day.

I’ve finally got around to it now though with the help of Colin. He lives in one of the bungalows next door and his garden backs onto the area of fencing we had removed ready for the lean-to. He was quite happy with the plans for the lean-to as it meant he was getting a nice new fence ready for a patio area he is creating.

When we opened the packaging though we discovered that the tapes we had ordered for the ends of the polycarbonate sheeting were quite squashed and barely usable and that they had only delivered half what we had paid for. Fortunately that was still enough so we should get a refund for that as well as the delivery charge which means that Sheet Plastics owe us around £50. So far though we haven’t seen this money despite the fact that they have said that they have refunded it for us.

Oh well, it didn’t stop Col and I from making a start on the roofing earlier this week.

Man-handling the 2.5m pieces of polycarbonate into place wasn’t too bad once I’d removed the drainpipes to make access easier and there wasn’t too much wind. Even the slightest breeze catches them though and there is almost always some wind here. First the aluminium tape at the top and the breather tape at the bottom of the polycarbonate sheets had to be replaced. A top ‘u’-shaped plastic cap had to be cut to size and encouraged (with lots of washing up liquid) onto to the top edge of the sheets too. Aluminium joining rails had to be cut to size, drilled and screwed onto the rafters. Plastics cappings for the joining rails had to be cut to size as well. The rafters had to be moved slightly to get them in the correct place and then the polycarbonate sheets were put in place one by one. Each was one drilled and then secured down with fastening buttons. I discovered towards the end of the process that the screws that came with the buttons were useless. They didn’t bite and the heads were soft so easily rounded which meant that a few weren’t quite as well fixed as they could be. Once I started using the decking screws I had bought for elsewhere though they went on a treat.

Once the second sheet was in place the plastic capping on the first aluminium joining rail could be put in place. Getting it to click into place under the soffits wasn’t easy though as it was hard to reach and difficult to get to. We managed in the end though with some careful balancing along it and the use of a crafty wooden lever to click them into place. There were five roofing sheets in total and the fifth one needed cutting down to size. 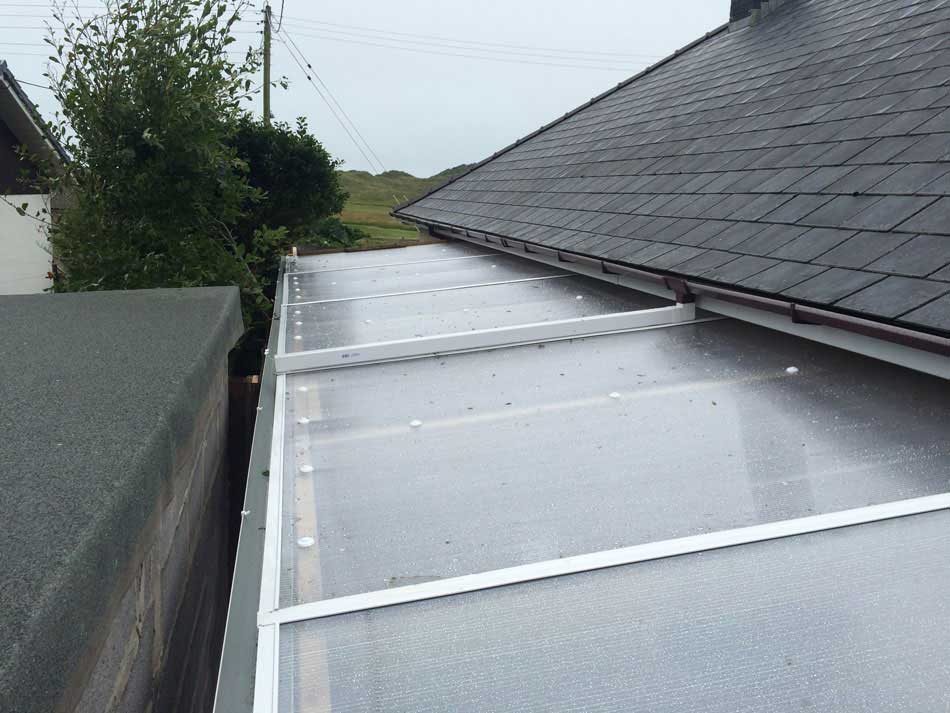 With all the sheets in place it was time to add some more fixing buttons along the bottom edge. I also secured the rafters a little more firmly. Then we re-routed the downpipe from the house guttering across the top of the lean-to roof into the lean-to guttering. The plastic-coated aluminium drip-rail was then cut to size and a section of it put onto the bottom end of each of the roofing sheets. This seems a little odd as it has quite a big lip on the top edge which you can just see in the photo above (also see close up below). This will prevent water from draining off the roof and into the gutter but I can’t see how else it would go on. The aluminium drip rail also pushes right onto the polycarbonate sheeting, which effectively seals off the breather tape. By contrast the plastic rail at the top edge only goes on part way, leaving an air gap between plastic capping and the open ends of the polycarbonate sheet. It did go on well though and once we had put the guttering back in place, it hangs down right into the centre of the gutter. 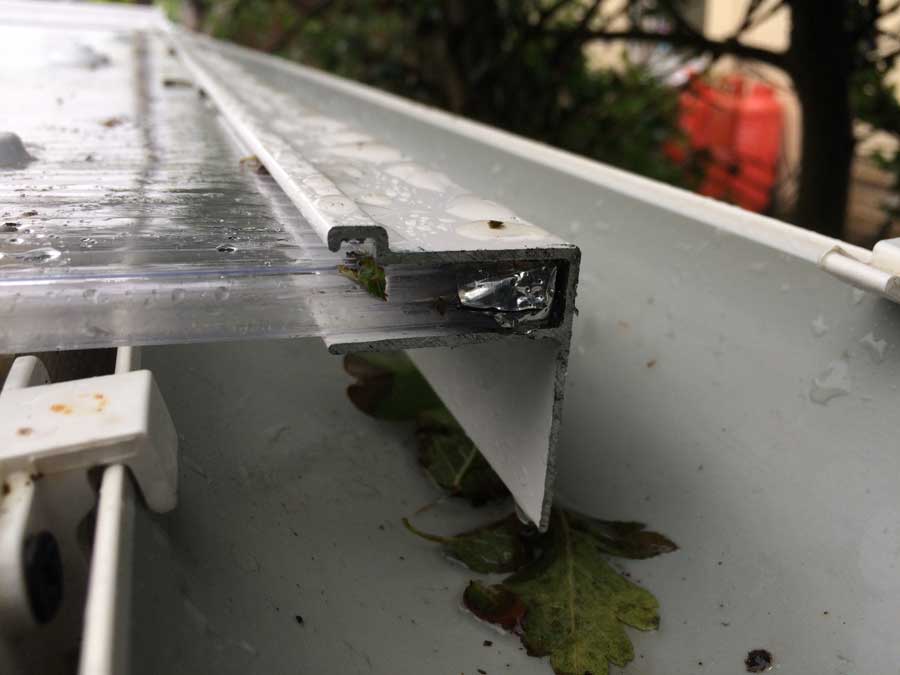 We made up a couple of temporary end pieces just to hold the two side-ends of the sheeting in place, but I’ll need a couple more pieces of wood to neaten these up and finish them off properly. With that done, the roof was in place and we had cover.

As we finished off on Thursday evening, a microlight flew over in the sunshine. It wasn’t until later that I found out this was a client of mine from Aberdyfi who I’m currently building a website for. he later told me that the roof is looking good from above!

Friday was quite a windy day and it didn’t seem to rattle around too much. The sheeting does flex quite a bit so I might put some joists perpendicular to the rafters in the middle of the frame and get some more fixing buttons so that I can anchor it down a little more. It wasn’t properly blowing a gale but it seemed OK in a moderate wind. It was also very wet in the morning and the roof seemed to keep that out as I continued to work under it. 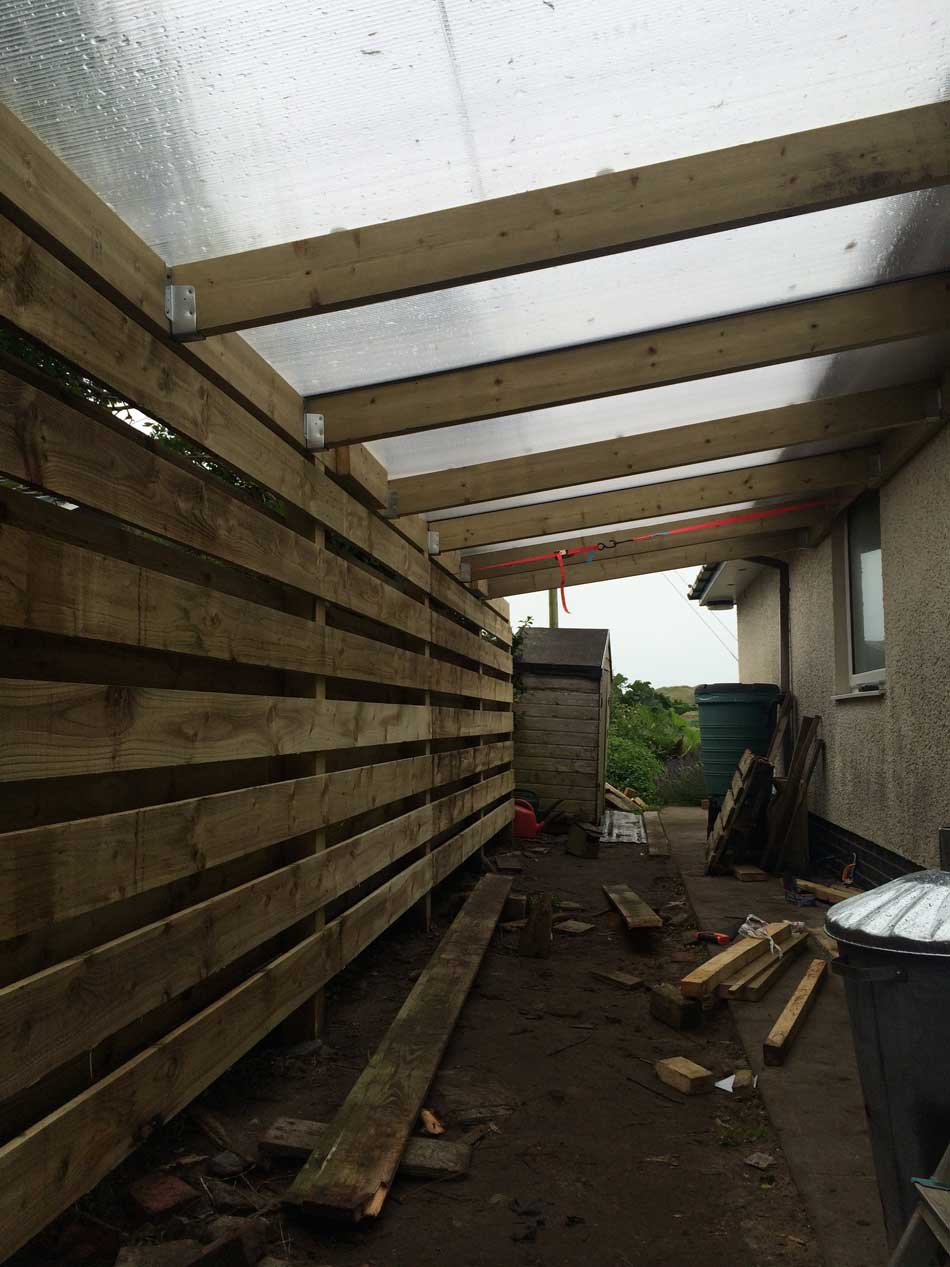 It dried up later though and Col and I set to work finishing off the roof and then putting the horizontal planks on onto the fence. As expected, this was a fairly quick, easy job and it was soon done and looking good. We also constructed a little wooden baffle to block the gap between the end of the fence and the back of Cols shed. 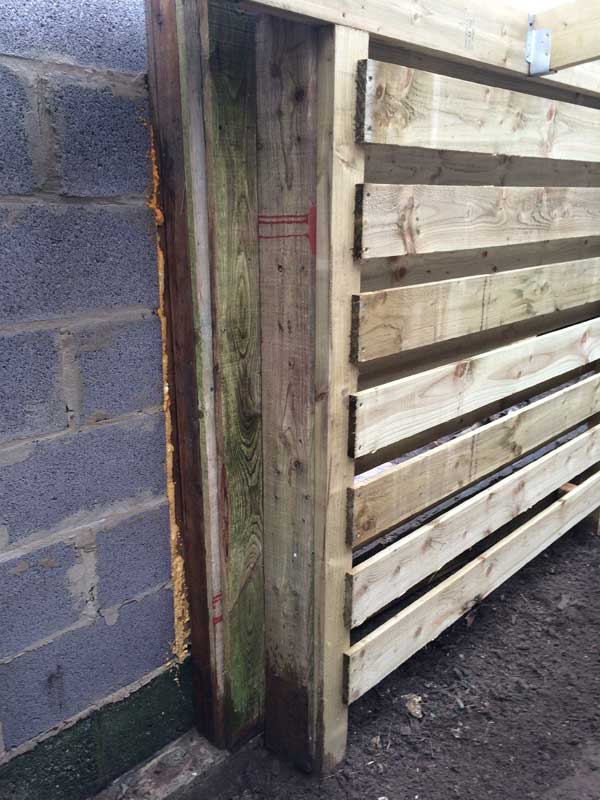 With that done we were almost there. Just some membrane to lay and gravel to cover it and then it’ll be time to start filling it up so that I can get my shed back.

I think we’ll have to bake a cake for Col as well as I couldn’t have done it on my own and if we had to wait for a dry, windless weekend we could have been waiting a while! 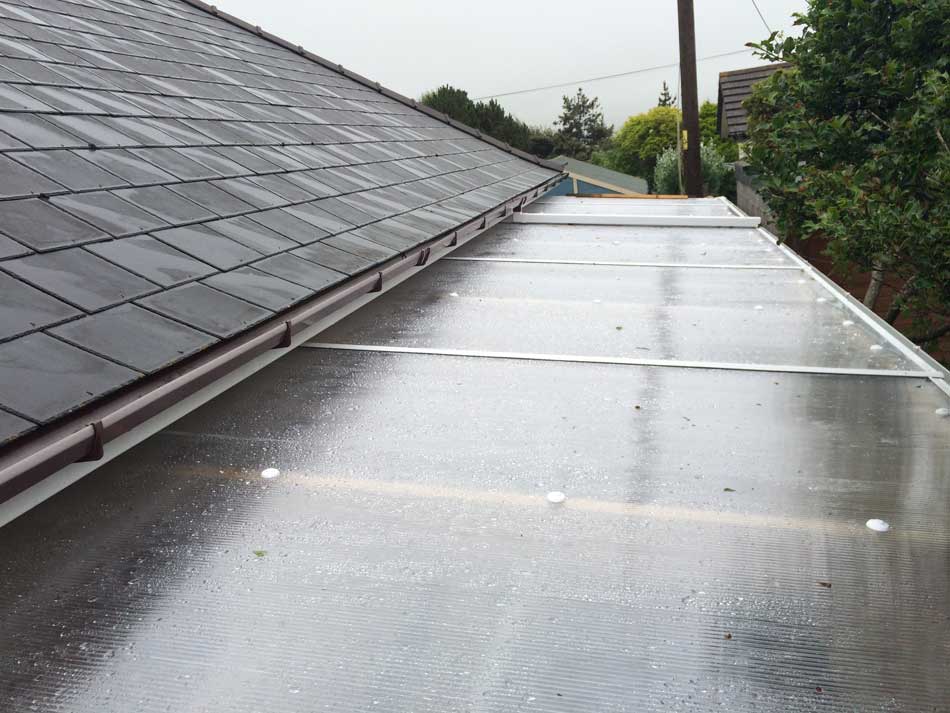 Lean to roof in the rain