My Kind of Day

The half-term continues and amazingly the weather continues to impress too. Further east in the country people are complaining of the cold, wet, miserable weather, but here in the west it has been gorgeous for ages now. Sunshine from 4 am until the sun sets at around 9:30pm and temperatures up into the 20’s everyday. Wind sometimes from the north or east in the morning then swinging around to the west or northwest in the afternoon as a sea breeze kicks in and, as you’ve seen from recent blogs, sometimes strong enough for windsurfing, but other times as calm as could be. Just perfect.

The main problem is getting Morgan out of the house to enjoy it though. I don’t know what’s wrong with the boy? I’ve offered, swimming, playing on the beach, kiting, windsurfing, surfing, stand-up paddleboarding, mountain biking, canoeing, riding our bikes and building a ramp in the car park, walking, trying to find some low flying jets in the hills on the Mach Loop, snorkelling, fishing, gardening, beekeeping but none of it seems to appeal. He just wants to sit at home either playing on his computer or reading his book. I do of course force him out now and then, but sometimes it’s just more trouble than it’s worth and easier to leave him to it. Although, this does mean that I can be stuck at home a little as well.

Anna was off work on Thursday though so with extra ‘baby-sitting’ services it turned into my kind of day.

As usual I was up early at around 4am and so had a little bit of time as the sun rose to catch up with some work. Not too much though as this was the holidays, so just a few website tweaks and keeping up with the steady flow of emails that need answering. I then headed off for an early morning run whilst Anna was still in bed. Morgan was up by 6am though and was already on his computer.

Running in the hills behind Borth

It was still quite cool at around 10ºC which is perfect for running. The sun was shining, the winds were light and the run was lovely. I was originally going to do some hill reps on a hill behind Dolybont, but when I got there decided to go right to the top of the hill rather than stop and go back down, just so that I could see the views out over the bog. 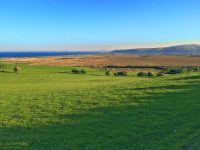 Views from my Run

I therefore ended up doing a nice hilly loop in the hills above Borth which turned out to be around 7 miles long.

I even saw some wallabies whilst out on my run! 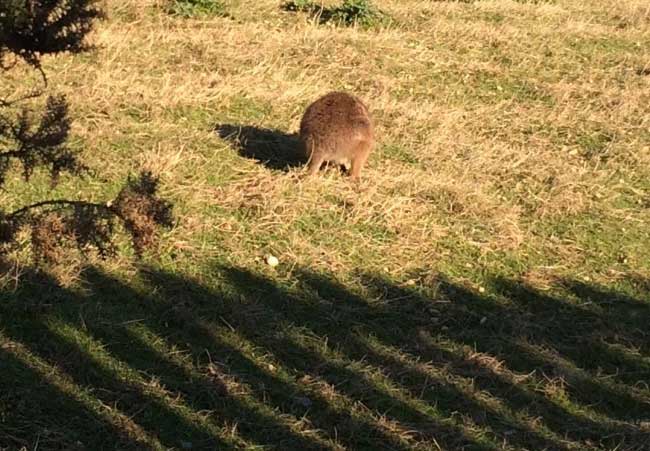 A Ride Home from Aberystwyth

Next on the agenda was a quick drive into Aberystwyth to drop Anna’s car off at the garage for 8:30am. It needed a new CV gaitor. For some reason our cars always need new CV gaitors. I don’t know why but they need replacing all the time. With her car dropped off it was time to jump on my bike and ride home. It was warming up now, 12ºC when I left home, but 14ºC in Aberystwyth. Sunnies, shorts and short-sleeves weather on the bike.

Point to point rides are always nice, but the main issue with them is that you can have a headwind all the way. That was the case today as I rode into an increasingly strong N to NE wind. The section between Taliesin and Tre Ddol as I approached the Dyfi Valley was particularly windy. It’s downhill and I’d usually be doing 30mph here but today I was struggling to get above 15mph as the wind did it’s best to stop me in my tracks. I was hoping to make up for it with a strong tailwind across the bog from Tre Ddol to Ynyslas, but it was more northerly than I was expecting so I just had to contend with a viscous side wind instead.

Just a short ride, but that was another activity for the day and therefore more Bounts points. Talking of Bounts points, after another shower I then cashed in just over 5,500 of the Bounts points I’d accumulated to get me £20 worth of Amazon vouchers. It was also time for breakfast, a coffee and to make a batch of yoghurt. We’ve always got a batch of home-made yoghurt on the go. I sat for 5  minutes in the conservatory with my coffee, deciding what to do with the day – Windsurfing, surfing, SUPing? Gardening, canoeing, beekeeping? Playing on the beach, snorkelling, the choice was mine but it would be good to do something Anna and Morgan could join in with too.

First up, as the others weren’t quite ready for action, was to continue building my new raised bed vegetable patch. I shifted more ‘soil’ from around the back of the house, raked it all over and then got busy with the planting. It’s take a while to fill it and as usual the soil is very sandy but I have enriched it with compost from the compost bins, a tonne of topsoil that we bought and lots of blood fish and bone so hopefully the veggies will grow well.

I put the rhubarb that had been removed to build the raised bed back in. I sowed some bean and nasturtium seeds and planted out the courgettes that we had grown from seed in the conservatory. I also planted out some Calabrese – or broccoli as we like to call it. From what I’ve read though the term broccoli refers to the sprouting types such as purple sprouting broccoli where the ‘broccoli’s’ that we buy in the supermarket with big bulbous heads are actually calabrese – a slightly different type of broccoli. Whatever it is, we’ve now got some growing and hopefully soon they’ll be providing us with healthy veg for dinner. 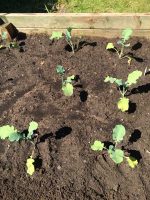 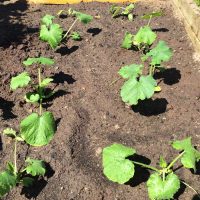 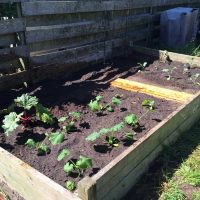 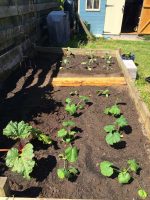 With the gardening done it was time to turn our attention to the bees. This was a task that we had planned for today as we wanted to split one hive into two separate hives. It all went well but I won’t blog about it here as I’ve already written a separate blog post all about splitting a hive, complete with a fun little video too.

The bees were busy in the garden as well as around the hives, with plenty of them collecting from the chives and the poached egg plants. The Iris and Sisyrinchia were looking good in the garden today, as was the entire garden itself. It’s amazing what a bit of sunshine and plenty of watering can do. 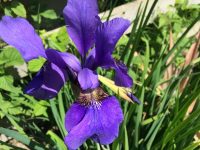 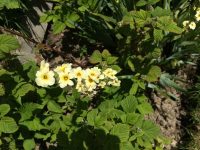 By now, the wind had dropped significantly and the temperature was up to 18ºC. So after a quick lunch we all headed into Borth in the car and ended up sitting in a traffic jam for half an hour! Not quite what we had planned so we stopped waiting and parked up in the Community Hall car park and walked across to the beach from there. We had our snorkelling stuff with us so Morgan and I got straight into the water while Anna relaxed on the beach with her book. Morgan was a bit of a wimp though and wouldn’t get in properly as he said it was too cold. I guess it is still a little chilly as it is only just June so the water hasn’t had chance to warm up much. Actual sea temperatures are around 11ºC, but close into shore where it is shallow they are a little warmer. Still not warm I suppose, but I’m sure he could have got in properly if only for a few minutes as he did have a wetsuit on. 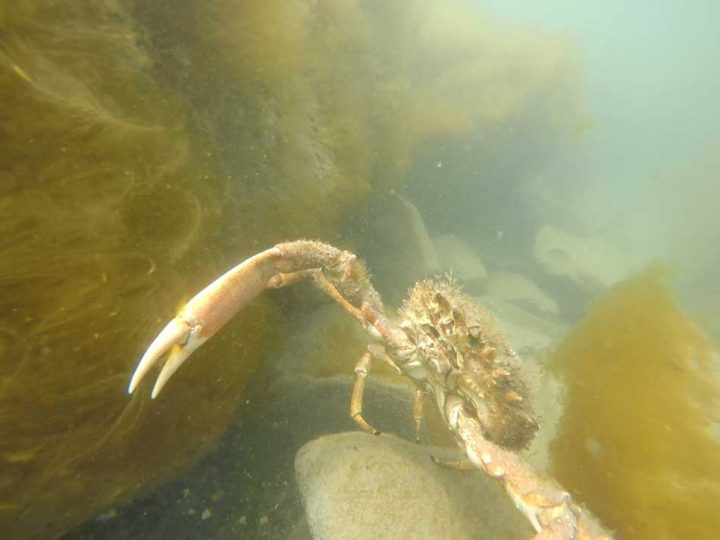 Here’s Looking at You

I stayed in for about an hour in total and wasn’t at all cold. First snorkelling on the reefs – again, I’ve written a separate blog post about this complete with lots of photos and video, so all I’ll say here is that it was fantastic with nice clear water and loads of sea-life. I then went for a short swim as well to test my shoulder. It hurt a little but I was at least able to swim.

By the time we got home it was late afternoon so time to light the barbecue ready for some burgers and beer in the garden. The temperature was still rising and peaked at 20.2ºC at 4:28pm so we sat in the garden and enjoyed the summer. Once that became too much we headed indoors where I got busy with some blogging and video editing of the days activities.

Another action packed day with lots accomplished – My kind of day. I wonder what the next few days will have in store for us?