That was a good day, especially as it was only Friday and not even the weekend.

Up early as usual after a poor nights sleep for an hour or so of work on the computer and then off for a fairly hard 70 minute run from home. It shouldn’t have been that hard as it wasn’t very fast, but my legs were tired and it felt like a bit of a slog at times.

Back at home it was time for a shower and then to get Morgan up and ready for school. Anna is on the Isle of Man at the moment so we were soon breakfasted, packed and ready to go, somehow with about 45 minutes to spare so I managed to do a little bit more work. It was then time for the school run and a day at work. It was busy at work today as well, but I got lots done and had a nice walk around campus in the sunshine too as I had a few work errands to run.

I did notice whilst walking around campus that the sea breeze was filling in again. It did this on Thursday which led to a lovely windsurf session when I got home. I’d had two new sails delivered, a 5.7m and a 6.7m but didn’t get time to unpack them and try them out. Thankfully it was 5m weather on Thursday so I didn’t need them.

Friday was looking good too, but time was limited, so after doing the school run to collect Morgan I had exactly an hour to get my kit out of the shed, cart it over to the beach, rig up, sail, de-rig, cart my kit back from the beach, put it in the shed, shower and get changed. I managed to fit it all in though thanks to a masterclass in speed rigging and de-rigging and had half an hour on the water well-powered with my 5m sail again. It was actually better than Thursday as there was a little bit more wind, the waves were a little cleaner and there were more ramps to launch jumps off. I was straight on it from the very first time I launched too – what a session!

There was then 5 minutes to eat some dinner and pack things ready to take the Scouts on a two hour walk in the hills around Foel Fawr. The ground underfoot was pretty wet on the way back so everyone was soaked. Mind you a few of the older ones decided to have a bit of a water-fight too so as ‘their leader’ I took the brunt of it and was just as wet as they were. Everyone seemed to enjoy what was a lovely evening for a walk with of course some spectacular views of the estuary. 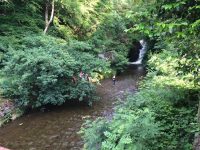 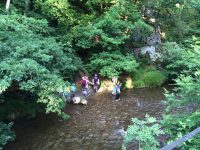 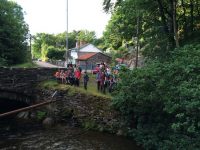 That wasn’t it for me though as I’d had a phonecall during the day about a swarm of bees so I had to get my beekeeping and swarm collection kit together and drive into Penparcau to collect them. Turned out it was a small bumble colony though, not a huge swarm so it was a wasted trip really. Back at home I phoned Anna and then did some video editing so that I could get to bed at around midnight, ready to start it all over again at 5am.