Well, the forecast was correct. After what was a lovely day on Good Friday, Saturday was a washout, a very windy washout as well. I still wasn’t feeling like a triathlete, but decided that I should probably go for a run or at least a walk up a hill. Anna and Morgan wanted to go into Aberystwyth so whilst they were out shopping I drove in Tre Ddol and headed off on a mission to finally find the geocache on top of Moel y Garn.

I did try to get to it a couple of weeks ago but a sudden snowstorm drove me off the hills. Today, it was the wind and rain that I would have to contend with. I ran up through Cwm Clettwr and out onto the top, following various footpaths through the woodlands and across fields. I then headed up onto one of the â€˜Explore Dfyi’ tracks out onto track on the northern side of Moel y Garn.

My running was terrible, slow and sluggish but I did have the excuse of going up a fairly substantial hill and into a howling gale. Once I was directly north of the summit of Moel y Garn I left the track and headed off across country towards the summit. The steep slopes, the driving rain and my general lack of oomph had me walking at this stage. I made it to the top though where I was greeting by ridiculously strong winds that had me down on all fours. I tired to stand up a few times but simply couldn’t as I would just get blown over within seconds. There was nothing for it but to crawl around on all fours looking for the Moel y Garn geocache. 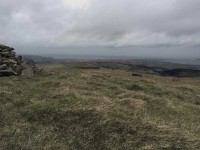 I managed to find it and carefully extracted the log book, all the while pinning things down with knees and elbows so they didn’t blow away. Hanging onto the logbook was quite a challenge too as the wind whipped around me and tried to wrench it from my grasp. Needless to say I wrote very little, just signed my name and put it back where it had come from before making a hasty retreat back down off the hill and out of the gale.

The rain started now and is was soon lashing down and stinging my face with such a wind behind it, so I put on my buff and soon also had my hat, gloves and second jacket on as it was also getting pretty cold. I was for once glad to have carried a rucksack with extra layers!

I had planned on exploring a little to see if I could find some of the tracks marked on the map on the hill to the north and to look at bases that have been installed up here ready for some new wind turbines but my lack of verve and the increasingly poor weather conditions made me decide to simply follow my tracks back to the car. I did try to explore a little once back in Cwm Clettwr Nature Reserve, but only found dead ends.

It ended up being a very slow 7.5 mile run, but at least I had finally found the Moel y Garn geocache as it had been on my radar for ages.