I posted a couple of months ago about the new Advanced Running Dynamics from Garmin. I essentially said that whilst the new metrics such as Vertical Ratio and Ground Contact Time Balance were interesting in their own right, there wasn’t really much that one could use the information for. The Run Dynamics metrics might tell you that your vertical ratio was too high, but actively changing such things is difficult to do and drastic changes in running biomechanics to address any such short-comings could in itself lead to issues such as injuries.

At the time I was running only slow paced, MAF zone runs, keeping my heart rate below 140bpm. This meant that  my flat terrain pace around the 8:00 mins/mile mark. As Spring approaches and I’ve been doing one or two slightly faster tempo style runs I thought it would be interesting to take another look at my run dynamics and compare them to those of my slower paced runs.

Running speed is the result of two things, run cadence and stride length. If you increase either of these or both at the same time then you go faster. If you keep your stride length the same but increase the cadence you take more strides per minute and therefore cover more distance in that minute. The same is true if your cadence remains the same but your stride length increases. Increase both at the same time and you go even faster. It’s simply maths and we all know how to do it. We don’t think of increasing cadence or lengthening our stride, we just run faster.

When we just ‘run faster’ it’s obvious that we must be increasing either run cadence, stride length or both, there’s no other way to cover more ground in the same time whilst running. What is interesting to see though is that other Run Dynamics also change along with this. The 140bpm MAF zone run that I analysed back in January was a slow paced (8:10 mins/mile) flat run on the track. By contrast, earlier this week I did a hilly tempo run that averaged 7:15 mins/mile, but the flat bits were at a more respectable 6:45 mins/mile (average HR was 150bpm). Still not fast, but definitely faster, and it has given me a chance to compare my other Advance Run Dynamics. 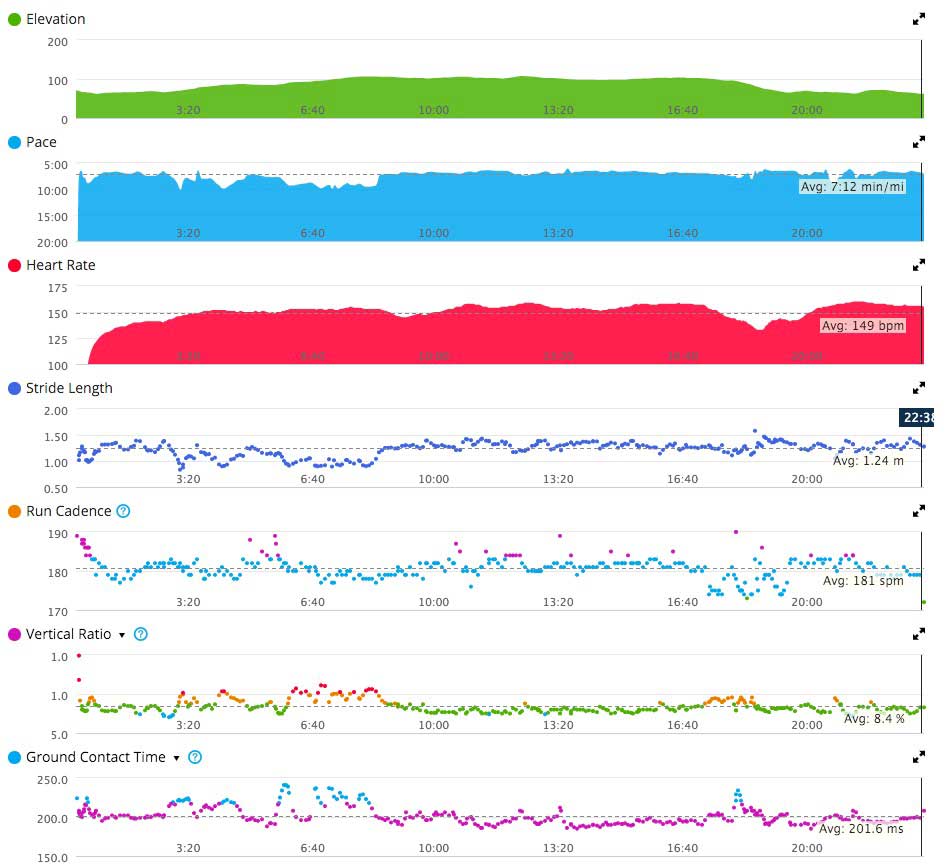 My average stride length increased from 1.10m to 1.24m. That’s an extra 14cm for every step I take, which is quite significant.

My cadence increased from 173spm to 182spm. So that’s an extra 9 strides every minute.

Ground contact time did change just a little, from 210ms to 201ms. Not a huge change but that’s less time with my foot spent on the ground for each step. This stands to reason really as an increase in cadence has to result in a decrease in Ground Contact Time. Nothing unexpected there then.

Ground Contact Time Balance was interesting though as this is a measure of the symmetricality (is that even a word?) of your running gait. A perfect 50/50 score would show that you spend the same amount of time on each foot which would result in a more symmetrical running gait.

“Many coaches believe that a symmetrical gait is most desirable for performance and injury prevention. Garmin has researched many runners of all different levels to determine typical ground contact balance ranges.”

During my slower paced run my GCT Balance wasn’t great at 48.3% Left, 51.7% Right. However, this improved at the faster pace and was much more symmetrical with the Garmin Advanced Run Dynamics reporting a GCT Balance of 49.9% Left, 50.1% right. This is even more surprising a change when you consider that this faster paced run was actually hilly and according to Garmin:

“Testing has shown that for many runners GCT Balance tends to deviate further from 50 – 50 when running up or down hills. Some runners report that injuries are reflected in their GCT Balance.”

It would seem that I have a more symmetrical, more balance running gait at faster speeds, despite the hills.

Vertical Oscillation during my slower paced run wasn’t great with an average of 11.6cm and the graph showing me in the red (far too much) vertical oscillation zone for almost the entire run. This means that I was expending far too much energy propelling myself up and down rather than forwards. Once at a faster pace though this improved with an average vertical oscillation of 10.5cm and a graph showing that I was mainly within the orange ‘OK’ zone for most of the run.

Again, this is a little surprising as Garmin state that:

This is a relationship between the cost of vertical oscillation and the benefit of the distance travelled per stride. in some ways it’s a combination of  all the run dynamics to give you something of an efficiency score for your running gait.

In some respects I guess it would stand to reason that running at a faster pace brings with it improvements in Run Dynamics and your running biomechanics. When you run at a decent pace you tend to flow along better rather than when running at a slow lolloping pace. No doubt there’s a limit to this, but that’s probably where running becomes sprinting.

It does however beg the question as to whether or not running at a slow pace as part of your training is actually causing any issues. We’re led to believe that much of our training should be at low intensities so as to improve the efficiency of our cardiovascular engine without placing too much stress on the body. This is supposed to mean that our bodies aren’t too beat up for the harder, higher intensity sessions that we need to do, meaning that we can perform these with much better quality. This polarised training would seem to make sense.

However, training isn’t just about improvements in your cardiovascular system, muscle systems and other physiological improvements. It is also about practising the movement and gaining the muscle memory needed to perform these movements over and over again in the most efficient manner possible. I wonder if detriment to running mechanics associated with running at a slower pace, means that by training at the slower paces I’m actually teaching myself bad habits. Habits that may then find their way into my faster paced runs as and when I do them. Obviously slower paced runs have benefits in other respects, but I’m sure that practising bad running dynamics can’t be good.

It’ll be interesting to see how these change as I up the pace even more. There has to be some correlation between better running dynamics and faster paces, but whether this is cause or effect is difficult to tell. Is it running faster that promotes better technique, or better technique that leads to a faster pace? Ideally I’d be able to run with perfect run dynamics at a wide range of paces, but that doesn’t seem possible, but it’ll be nice to see if my run dynamics improve even more at yet faster paces. Watch this space.