As I think I’ve mentioned previously, I’ve been back and forth to the doctors recently for some blood tests.

The first two were fine and all the results were OK. I wasn’t really supposed to be having test 3 as that was a mistake but I went along anyway just in case and strangely, the results showed a sudden drop in my blood count levels and my iron levels. These red flags meant that another similar test was arranged to double check and to add a few extra tests too. They were worried that I was anaemic and so wanted to check some things and find out the cause of the sudden drop in these biomarkers.

I went back to the doctors on Tuesday to get the results of this latest round of checks. My blood counts and ferritin levels had risen a bit but were still quite low in comparison to normal and the ‘Helicobacter antibody’ test that they did had proved positive as well.

Apparently Helicobacter, or to give it it’s full name Helicobacter pylori, (previously Campylobacter pylori), is a microaerophilic bacterium found in the stomach. It is believed to cause gastric ulcers and gastritis which can then cause bleeding within the gut that leads to anaemia. It is also linked to the development of duodenal ulcers and stomach cancer. According to the tests I have a Helicobacter pylori infection and the docs think it needs to be treated.

It’s nothing to panic about, more than 50% of the world’s population have H. pylori in their upper gastrointestinal tract, so it’s not uncommon. It’s more common in developing countries and the incidence is decreasing in Western countries. The sudden drop in my blood counts levels obviously had the doctors a little concerned though and they have decided that we should eradicate H. pylori from my body!

What’s weird is that I have no symptoms at all. The low blood count, the anaemia and the bacterial infection, none of them seem to have affected me outwardly. I’m my usual self, going about my business as I usually do. The only reason anyone even knew that my iron levels were low or that there might be an issue was the fact that I was erroneously called back to the doctors for a blood test that I had already had. I’m not 100% convinced that there’s really anything wrong, but I guess the drop in iron levels are a cause for concern, and if the bacterial infection is the cause of this then maybe it is time to rid myself of it.

I have of course checked Wikipedia to find out more and it states:

Once H. pylori is detected in a person with a peptic ulcer, the normal procedure is to eradicate it and allow the ulcer to heal. The standard first-line therapy is a one-week “triple therapy” consisting of proton pump inhibitors such as omeprazole and the antibiotics clarithromycin and amoxicillin. Variations of the triple therapy have been developed over the years, such as using a different proton pump inhibitor, as with pantoprazole or rabeprazole, or replacing amoxicillin with metronidazole for people who are allergic to penicillin.

That’s exactly what I’m on, so that sounds good. I’m currently on a course of amoxicillin and metronidazole along with the proton pump inhibitors omeprazole  to combat the stomach upset caused by the antibiotics. 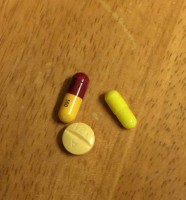 I then have to go for a breath test at some point to check to see if the antibiotics have done the job and cleared up the Helicobacter infection. Finally I’ll have to go for another blood test in a few months to see if eradicating the H. pylori has helped my ferritin and blood count levels to return to normal.

What is a little odd though is the fact that the wikipedia page also says:

Ingesting lactic acid bacteria exerts a suppressive effect on H. pylori infection in both animals and humans, and supplementing with Lactobacillus– and Bifidobacterium-containing yogurt improved the rates of eradication of H. pylori in humans.

I eat loads of natural yoghurt. I make the yoghurt myself and it must be full of such bacteria so you would have thought that my gut flora would be well balanced with plenty of the good lactic acid bacteria out competing the Helicobacteria. It would seem that I would be low on the list of people who would have any issues due to a Helicobacter gut infection, but that doesn’t seem to be the case.

H. pylori colonizes the stomach and induces chronic gastritis, a long-lasting inflammation of the stomach. The bacterium persists in the stomach for decades in most people. Most individuals infected by H. pylori will never experience clinical symptoms despite having chronic gastritis. About 10-20% of those colonized by H. pylori will ultimately develop gastric and duodenal ulcers. H. pylori infection is also associated with a 1-2% lifetime risk of stomach cancer and a less than 1% risk of gastric MALT lymphoma.

This would suggest that maybe getting rid of the H. pylori infection would be a good thing as it will reduce the risk of such diseases. However, there is also some evidence suggesting that H. pylori has an important role in protection from some diseases. Apparently,

The incidence of acid reflux disease, Barrett’s esophagus, and esophageal cancer have been rising dramatically at the same time as H. pylori’s presence decreases.

Clearly this is purely correlation not cause. A number of things could be causing the rise in incidence of these diseases, just because that is happening in line with the decrease in H. pylori doesn’t mean that they are related. However it has been hypothesised that H. pylori has a beneficial effect in the stomach by regulating the acidity of the stomach contents. Although this hasn’t been proved and no connection between the absence of H.pylori in the stomach and the incidence of other diseases has been established, there are those that think that H. pylori is a member of the normal flora of the stomach. They postulate that:

Changes in gastric physiology caused by the loss of H. pylori account for the recent increase in incidence of several diseases, including type 2 diabetes, obesity, and asthma.

I guess the only thing one can do in such a situation is take the doctors advice – that’s what they are there for after all, but I guess it’s always good to check up on them.

Who knows, maybe the H.pylori infection is having an effect. Although I feel fine, maybe that’s just what I’m used to and I could feel better. Perhaps the H.pylori has been holding me back all these years, and although I’m ‘awesome’ anyway, getting rid of it might just make me a little bit ‘awesomer’! That would be good.