Back to Basics with the Triathlon Training Plan

It’s back to basics this week with my triathlon training plan, thanks to a bout of illness. A nasty cold, chest infection, man-flu, lurgy, whatever you want to call it, I had it and it wasn’t much fun. I obviously stopped training as soon as it developed fully and then left it for just over a week. There was no way I would have been able to do any training for much of this time even if I’d tried to force it. However, after more than a week of this I was beginning to go mad and was worrying about losing all those hard earned gains I’d made over the previous few months, so just had to do something.

After a weekend in Bristol I was still feeling a little under the weather and the session at Air Hop tired me out and didn’t do wonders for my back either. However, Monday was the start of a new week, so it was time to get back to basics with my periodised training plan. It had been going well and the usual meso-scale periodisations of a low volume, mid volume, high volume, recovery week progression had been suiting me well. A week of no training thanks to the lurgy had obviously disrupted this and my carefully worked out plans had to change. I decided to start back with a recovery week in order to get myself back in the groove. A typical Monday on a recovery week for me is an easy hour on the turbo trainer all in an aerobic zone, and a 20 minute easy run, so that was my plan. 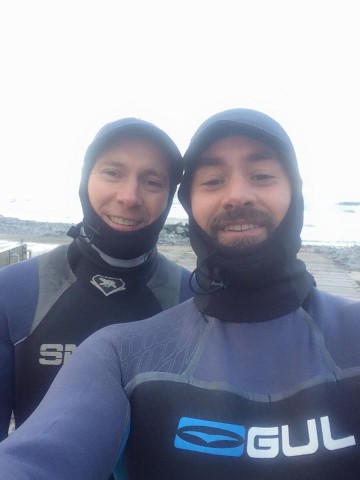 Monday morning dawned and I still didn’t feel 100%, but thought I’d give it a go anyway. Shem then phoned and asked if I wanted to go for a surf – I couldn’t really say no, so first I donned my wetsuit. I was still feeling a little vulnerable so wore my boots, gloves and hood too.

The surf was OK but not that good so after about 1 and 1/4 hours I got out and headed home ready for my bike and run.

The bike and run didn’t feel too bad, both were at and easy intensity and therefore slow pace and I did feel a little sluggish and tired but that was to be expected. I completed them though and felt quite good about finally having done something again. That was short-lived though as I soon felt terrible again. Aching all over, very stiff, terrible headache and the lurgy was back in control.

I was up much of the night coughing as well so didn’t get a great deal of sleep, but by Tuesday some of the aches and pains had subsided so I stuck to the revised plan with a 1.5 hour easy aerobic session on the turbo trainer. Again, I completed it but it wasn’t the best of performances. At least the aches and pains didn’t come back too viscously that evening.

Time for a Test

Don’t worry, I didn’t decide to really test myself on Wednesday, but my usual recovery workout on a Wednesday morning is a MAF test run on the track. Essentially I run around the track keeping my heart rate in the 135-140bpm range and record my pace per mile. I’d been seeing some improvement in this pace over the past few months, with it dropping from over 8 minutes per mile down to 7:43 minutes per mile. So, Wednesday morning dawned and I was on the track at 7am. Track running might not be the most exciting of pastimes, especially at this intensity, but I do quite look forward to these sessions as they are easy but are used as a gauge to improvements. Unfortunately today my pace was terrible. I may have gone back to basics with the training plan, but it seems as though I’m back to basics in terms of performance too. I kept my heart rate at around 139bpm, but could only manage a pace of 8:17 minutes per mile – right back down to where I was 3 months ago in September.

I only hope that this is due to the fact that I’m not 100% over the illness yet and that I’m not going to have to start from scratch again. I’m sure it is and that I’ll soon bounce back once fully recovered, but not being able to train and then only being able to train with pretty poor performances is quite frustrating. Better to get the lurgy out of the way now though I guess rather than next year with races looming.