We all had fun at the Honey Show the other evening, even if it was a bit of a rush to get there after work and parents evening.

As usual it was a fairly relaxed affair. As well as the various bee-keeping categories within the show such as jars of honey, wax blocks, frames ready for extraction and other wax products, there was the usual honey cake recipe which this year was a strange honey, ginger and orange cake known as a Ukranian Honey Cake. There was also a photo competition and of course the blind honey tasting where everyone brings in a sample of their honey for tasting. We all then taste and rate the various honey, the scores are collated and the best and worst honey of the year is announced.

We had entered a number of the photo competition categories, although we didn’t take any photos specifically for the competition this year. We also entered 2 1lb jars of honey into the medium honey category, and I baked a cake for the cake competition too.

Our honey usually comes out quite well in the blind tasting and this year it was no exception. In fact, we came out on top this year, but only just. Quite a few people had put little stars next to our honey as well during the tasting to say that it was especially nice and their favourite of the bunch. We might not have much honey, but it’s good to know that what we do have is a very nice tasting, quality honey. Although it has to be said that we added a Manuka Honey from New Zealand into the tasting just to see how it compared to the local honeys and it was rated as one of the least favourite honeys.

We didn’t do too well in the photo competition this year, with no prizes from that, but we were pleasantly surprised with our honey entry and our cake. We’ve never entered honey before as we haven’t usually got enough. The category calls for 2 1lb jars of honey and the judging is based on the colour, consistency and quality of the honey. It has to be clear, clean and free of impurities, have no air bubbles and be consistent from jar to jar. Quite a bit of attention is also paid to the jar and lids as they have to be exactly the same and of course sparkling clean. Each jar has to be filled properly too. Somehow, despite not knowing what we were doing we managed to get first place in this category.

Our Cake was met with similar accolade too, winning first prize in what was quite a popular category. 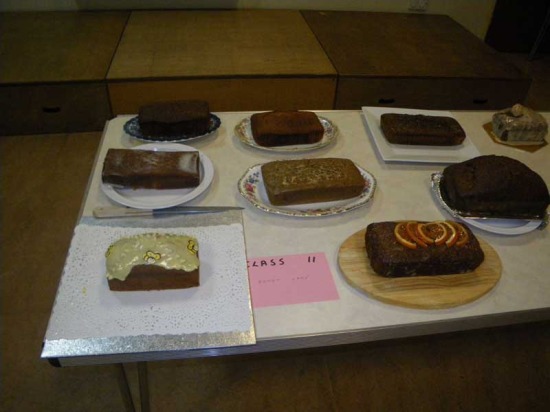 As usual, a nice evening out with the beekeepers and quite a bit of fun. If only we’d entered some of the other categories such as the frame ready for extraction or had made some wax blocks as with our other two winds that may have meant we would have been up for the overall points prize. It gives us something to aim for next year I guess. Ann won the points prize this year and best in show went jointly to Phil and Richard.