As I’ve mentioned elsewhere, Tuesday was a scorcher with temperatures up to an annual high of 32.8ºC. Not ideal weather for donning a full hooded bee-suit, wellies and gloves, but that’s what I did. It was the first chance for a while that I’d had to inspect the bees so I suited up and headed down to the apiary. 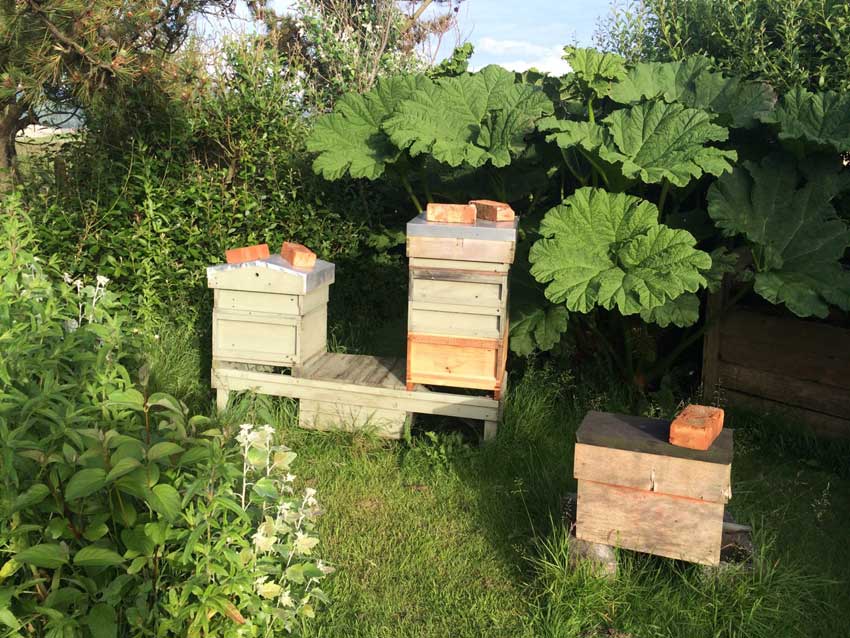 I was sweating in no time but things were a little overgrown behind the hives so my first task just added to that. I cut back some huge Gunnera leaves and hacked through nettles and brambles to clear a space. The bees were fairly busy in the sunshine and took little notice of me.

A Queen has be Crowned

I then got the smoker going and started my inspections. I wasn’t expecting much from the first hive as last time they were inspected (by Anna) she had said she didn’t hold out much hope for them as they still hadn’t re-queened and their numbers were dwindling. I was therefore pleased to see eggs, larvae in all stages and sealed brood on the first frame that I looked at. There were about four frames of brood in total, lots of eggs and a small amount of stores too so all was looking good. I didn’t see the queen herself but they have finally managed to re-queen successfully. Good news even if it has taken a while since splitting them back at the beginning of June.

It’s good to have a new queen in the apiary and especially one from this split as the colony it came from has been really good.

A Queen about to Depart?

The second hive looked OK as well, plenty of bees, plenty of stores, eggs, larvae and brood. Once again I didn’t see the queen and I did see what might have been the beginnings of a queen cell so we’ll have to keep an eye on that. It would be a shame to see an old queen depart just as a new one has arisen.

Later that day, whilst out swimming in the sea at Aberystwyth I had several messages. Some via Facebook, Some via Messenger, Others as Text Messages and Answer Phone messages and all from various people informing me of a colony of bees that had taken up residence in someone’s kayak. We didn’t have a huge amount of time or daylight left so we popped in on our way home to take a look and arranged to return the following evening to collect them. 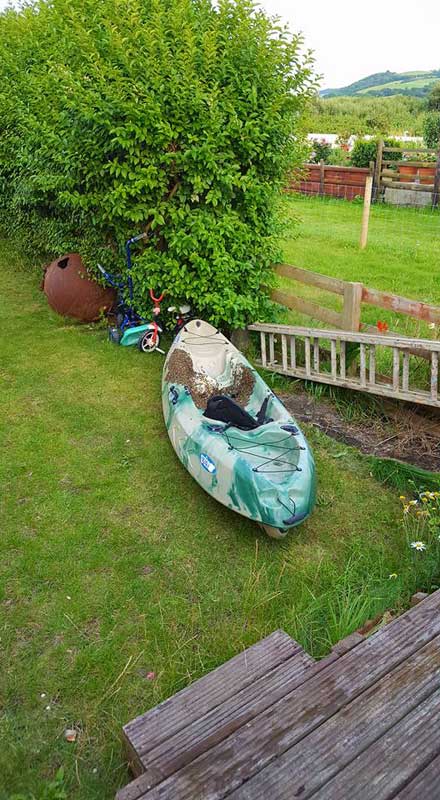 The ‘swarm’ looks quite good. It’s not really a swarm any more as it has properly taken up residence in the upturned kayak. There are 4 or five frames of comb covered in bees. Apparently they have been there for a couple of weeks. I think the plan will be to cut the comb off and wire it to some empty frames before putting them into a nuc box. Hopefully the bees will then move into the Nuc box so that I can take them to our out apiary and transfer them to a new hive. That should keep me occupied and out of mischief this evening!