This was all down to the Loop the loop series in the hills above Llywngwril by ‘Puffing Hippo. We had been eyeing this series up for a while as a way to beat our previous best geocaching day of 15 caches. This series had 25 caches that all seemed do-able in single walk. Morgan wanted to get them done this month as that would also help our monthly total and continue our geostreak. It seemed as though it would be a nice family day out too so the three of us set off after breakfast for the hour or so drive to Llywngwril. It rained all the way there but eased off by the time we parked.

We started with a walk down to the beach for the final cache of the series and found it easily so we were off. That meant that the first of our records had fallen already. By doing a cache today we had extended our geostreak to 25 days. We had more records planned though.

It was then a bit of a walk to the next cache which was actually the first in the series. This cache secured another new record for us though, the most caches found in a single year. previously our best year was 2013, with 91 caches, but we had now hit 92 for 2014. How high will it go? Our route led us up a steep hill past Castell y Gaer and a cache that we had found before, but we popped in on it anyway. We continued up the hill with nice views out across Cardigan Bay and headed off to the first loop around some nice footpaths at the top of the hill.

Most of the caches were somewhere between 0.1 and 0.2 miles apart so there were suitable places for a stop every now and then as we made our way over the impressive drystone walls up here and across various fields. This first loop ended with a multi-cache that took us back onto the road where we back-tracked on ourselves a little before once again heading off across the fields in search of yet more caches.

Geocache 6 of the day was “Loop the loop, it’s a breeze’ and with it came another new record, namely our monthly record. Previously this stood at 54 caches in a single month from back in April 2013, We’d just hit 55 caches for August though and there were more to come.

Lunch was had sheltering from the wind behind a high dry stone wall and then we continued on our way, across the fields and down into a steep valley before crossing the River Gwyril and climbing back up the steep slippery slope on the other side. The caches were coming quick and fast now and we were finding them all. No DNF’s, just cache after cache.

The walk continued and we found more caches as we went, with “Loop the loop 20” being our 500 cache milestone. We descended back towards Llwyngwril before one more heading back up the hill for caches number 22 and 23 in the series which finished them off. Morgan and Anna were getting a little tired by now though after 8 miles of walking a quite a long day. By the time we got back to the car we had found every cache in the series giving us a total of 25 geocaches for the day. We had covered 8.7 miles with almost 1,800 feet of climbing and had been out for just under 6 hours. We thought it time to celebrate with our first ever family selfie! 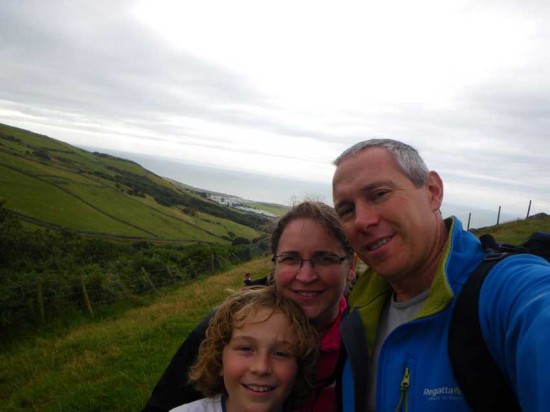 Our new records are as follows:

Not a bad day out really and with one more day in the month and several months left in the year some of those numbers should increase some more yet. Next on the agenda though is to finish off out 5/5 geocache that we’ve been working on.