Day 3 of our JOGLE adventure was underway, and I had finally had a good sleep at the Pitlochry Hostel. A full 4 hours which is quite good for me, and after breakfast and the usual pre-ride pfaff we were all ready to go. The sun was shining, Pitlochry was looking good and we had close to 100 miles to cover to get to our next destination which was New Lanark.

We had a lovely start to the day, following some small roads along the valley sides under the trees. The sun was shining, it was cool in the shade and there was no wind. It’s amazing what a good nights sleep and some sunshine can do, as we were all feeling chirpy as we left Pitlochry behind us. 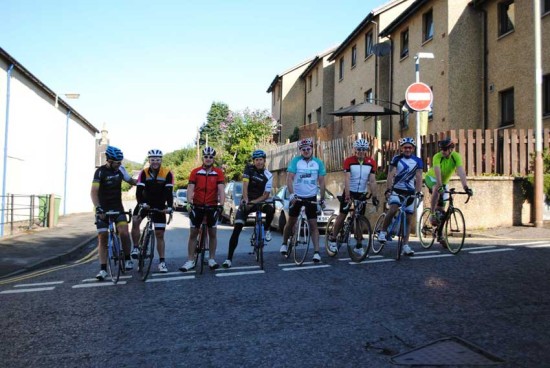 We were trying to avoid the A9 as much as possible for the sake of safety, but it also led to a more interesting ride and better scenery too. This did however mean that it was quite a complicated route for navigating so I was swapping pone with Anna whenever we stopped so that I could use them for navigating without the batteries running too low. This seemed to work quite well.

There were some lovely roads cutting across open countryside after our first stop in Bankfoot as we cut off the corner between the A9 and the A85. We then crossed the A85 and cut through more nice roads before once again crossing the A9 and a second stop at Dunning. Next up was a lovely climb up over the Ochill Hills and back down the other side. This was probably the highlight of the whole trip for me, with lovely views, a proper hill to climb and perfect weather for it. I was second to the top just behind Kev, so we both turned around and went back down to pick up those at the back and re-ride the top of the hill. It was nice to actually put some pressure on the pedals for a change though.

We stopped for lunch in a layby not long after this, but some of the other riders were complaining about climb!

After lunch we continued on our way but were now heading onto busier roads in order to cross the Firth of Forth and travel down beyond Stirling, Grangemouth and Falkirk. These roads weren’t great but we had little choice really. It also meant that the afternoon water stop seemed to be a long time coming and some of the riders were suffering by now.

After this stop, it was another climb along the main road before descending into New Lanark. I was first to the top and then eased off waiting for the others. Ian and Kev went flying past me though so I jumped on their wheels and had a nice blast for the last 10-15 miles into New Lanark at a decent speed just hanging onto their wheels

Once in New Lanark we met up with the support crew and waited for the others. There had been some confusion with the booking at the Youth Hostel though and we were booked in for August, not July… As wee a few other parties of visitors that night, so it was obviously a problem with the booking system and not our fault. The manager sorted us out in the end and Anna, Morgan and I ended up in their private quarters. I even found the router which had the access key written on the back so I had Wi-Fi as well!

By the time this was sorted out though it was quite late so we decided to get a Chinese Take Away for dinner. Morgan, Mike and myself went for a swim in the river whilst this was being ordered and after dinner Morgan and I did a little ‘Its Good to Talk’ geocache as well. New Lanark itself was a nice enough place. It’s a World Heritage Site so had some impressive architecture, but we didn’t really have much time to explore.

Its Good to Talk

There was some discussion about the routes that night though. It seemed as though some people wanted everything – shorter routes, less climbing and to stay off the main roads. Clearly that just isn’t possible and we have to go over some hills now and then. As far as I was concerned, I didn’t mind. I like the hills, the distance doesn’t bother me and I don’t actually mind riding on the main roads either. I can assure you I hadn’t picked hilly routes on purpose though, if anything my routes were the shortest and had the least elevation that I could find just to keep the others happy. If I had it my way I would have added more climbs and more interesting routes if possible, but I had simply picked what looked like the easiest routes.